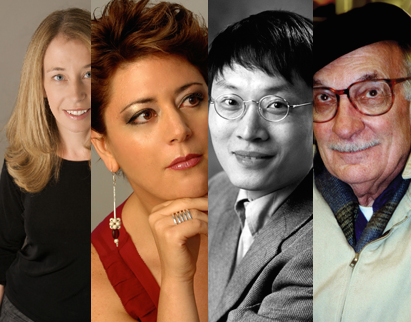 The San Francisco Contemporary Music Players have come up with a laudable concept for their new season, commissioning work from 10 composers who, stylistically and generationally, cover a wide spectrum of new music. The ensemble’s Project TenFourteen, co-produced with Cal Performances, saw its launch Sunday night in Berkeley’s Hertz Hall, with sharp performances across a gamut of musical approaches.

The featured composer with the largest historical presence is George Crumb, and his two world premieres for this program were a chance to get an updated sense of his artistic evolution. At 85, the new works on this program found him still mining new depths from the very personal idiom he has created over the course of his artistic life. Many of the familiar Crumb touches were there — his love of plucked and otherwise unconventionally played piano strings, a convincingly mystical air, long decaying resonances, and many small gestures woven into complex, alluring webs.

The voice of Federico Garcia Lorca has often haunted Crumb’s music, and provided the text for the most striking of his works on this program, The Yellow Moon of Andalusia, a set of six songs for soprano and amplified piano, with both musicians doubling on percussion. The cycle gained in both intensity and beauty as it went on, animated by the remarkable singing of guest soprano Tony Arnold. Her ability to negotiate serpentine passages with dead-on pitch, crystal clear diction, rhythmic incisiveness and overall agility were all means to gain access to the heart of the music. Her voice embodied the strangeness and beauty of Lorca’s text, making lines like “Woodcutter, cut down my shadow,” from Song of the Dead Orange Tree vividly alive and more deeply mysterious in song than on the page.

The SFCMP’s pianist, Kate Campbell, was equally fine in Crumb’s idiom. The piece is full of touches such as a woodblock played while resting on the piano’s frame, its sharp attack followed by a complex ringing of strings, and Campbell’s sensitive playing made these moments, as well as the writing for the keyboard, both poetic and primal.

Soprano Tony Arnold's ability to negotiate serpentine passages with dead-on pitch, crystal clear diction, rhythmic incisiveness, and overall agility were all means to gain access to the heart of the music.

Arnold and Campbell were joined by percussionists William Winant and Nick Woodbury for another Crumb premiere, Yesteryear. The work is built around a single line from Francois Villon’s Ballad of the Dead Ladies, in both French and English, mixed impressionistically with wordless vocalise and a variety of extended vocal techniques.

This work didn’t reach the transporting level of the Lorca cycle, but achieved some striking effects, particularly with the added, mostly metallic percussion textures. Arnold’s circumambulation of the audience added a ritualistic touch, and the short phrases, simple in their own right, built in a manner that was both lyrical and incantatory.

Another highlight was Corpórea, by Gabriela Ortiz, one of Mexico’s leading contemporary composers. The four-movement work is dedicated to the memory of Gilberto Bosques Saldivar, a Mexican diplomat whose rescue of thousands of Jews, supporters of the Spanish republic, and others during World War II was little known until after his death in 1995. As the title suggests, the work is also a meditation on physical existence, and it’s filled with both gentle, spare moments and exuberant playing from the full ensemble, with overlapping rhythms and accents interrupting and spurring each other in the fast movements.

Ortiz is an excellent orchestrator, with color and clarity of line marking the entire work. She produced some striking textures, such as the enigmatic mix of bass, harp, and marimba played with the hands that supported the opening flute solo. SFCMP’s Artistic Director, Steven Schick, led a tight, high-energy performance. Strong playing all around was highlighted by solo turns from flutist Tod Brody, who opened the work alternating between pure breathing sounds and graceful melodic material, bass clarinetist Jeff Anderle’s plaintive lines in the Adagio third movement, and the very vocal playing of cellist Stephen Harrison in both the third and fourth movements.

Another multi-movement work came from Boston-based composer Elena Ruehr. Her it’s about time for mixed sextet is based loosely on Baroque concerto form, with the violin holding a prominent solo role through much of the piece. This provided a spotlight for the deeply expressive playing of Hrabba Atladottir, from folk-like tunes spun out with elegant figuration in the opening movement to the violin’s rising, long-lined figures in the second. The full ensemble of clarinet, violin, cello, harp, guitar, and frame drums had its fullest challenge in the driving final movement, with overlaid rhythmic patterns pushing and pulling, rising and receding through a transparent texture deftly balanced by Schick. 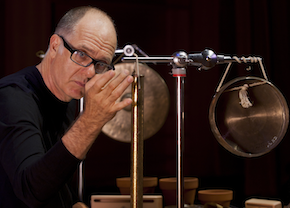 Arnold and Campbell were also spotlighted in the only works that were not world premieres. Arnold’s intensity and virtuosity found a perfect match in Georges Aperghis’ Récitation 9 and Récitation 10, works that suggest characters in breathless dialogue, or a clash of an individual’s internal voices, and are either way astonishing in performances at this level. The first piece builds from a mix of breaths, gasps, leaps between pitches, and repeated phrases and motifs jumbled in an unyielding forward process. Récitation 10 similarly mixed motifs, this time building around crescendos on individual pitches, and again received a riveting performance.

Campbell gave an excellent account of Crumb’s Five Pieces for Piano, from 1962. Though written before the composer gained wider attention, the set shows that a strong artistic persona had already emerged. This is already a music of gestures, ideas that stand out as frozen moments even as they flow into each other. Campbell has an impressive command of the work, moving nimbly and rapidly between the keyboard and plucked strings in the final piece, for example. This was a focused and beautifully sculpted performance, creating a sense of silence as the canvas for Crumb’s ideas and capturing the musical impulse behind each of the pieces.