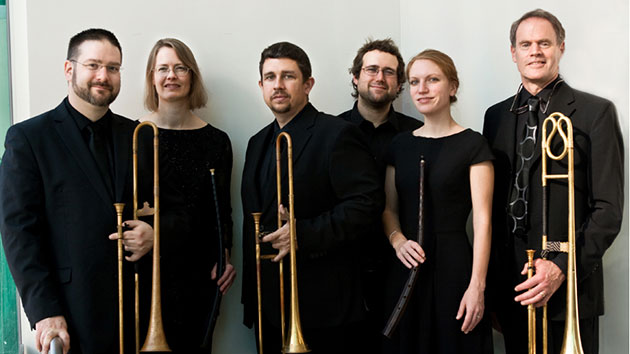 The early 17th Century was one of those special times in music history when experiment and wild imagination pushed music in dozens of interesting directions. It’s the time when we first find instrumental music coming to the fore. Although we only get to hear a fraction of the music composed around this time, there are several groups that specialize in it, and the Dark Horse Consort is one of these.

The four-year-old sextet plays three sackbuts (early trombones), two cornetti (early trumpets), keyboards and a theorbo. The consort’s name refers to the bronze horses in front of St. Mark’s Cathedral, Venice, which was an important home for mixed ensemble music at that time.

Presented by the San Francisco Early Music Society on Saturday night at St. John's Presbyterian Church in Berkeley, the group and two outstanding singers, Jolle Greenleaf and Molly Quinn, focused on German music from 1590-1650, covering some of the earliest scores we can find mixing voice and brass consort.

The program began, appropriately, with an intrada (entrance or prelude) by Alessandro Orologio, demonstrating the combined sound of the brass instruments, and their suitability as support for singers. (Since both sackbuts and cornetti vary their sound in the mouth -- as do singers -- this combination of instruments was used to support singing throughout the Renaissance.)  Sopranos Greenleaf and Quinn sang duets by Heinrich Schütz, Samuel Scheid,t and Johann Herman Schein. Both singers nailed rapid and highly florid passages. Quinn sang a solo with the excellent cornettist Kiri Tollaksen, who is also capable of the virtuosic style. The combined sound was a great match.

In among all the German pieces, Greenleaf burst out with a folksong in English, “My Lord Willoughby’s Welcome Home.” She has a gift for making words well understood and highly expressive. This song was so popular that it turned up as an instrumental quintet by Scheidt, “O Nachbar Roland,” which was played following the song.  Quinn sang a popular song in German, by Gabriel Voigtländer, which then was heard as the basis for an instrumental sonata set by Johann Vierdanck.

For Schein’s “Aus tiefer Not” (Out of deep anguish I call to God), the two sopranos heightened the effect of imitative phrases, by alternately singing with backs turned to the audience. A basso continuo accompaniment was provided by the bass sackbut. Keyboard accompaniments were played on the organ for the earlier pieces, and harpsichord for the later repertoire. Keyboard player Webb Wiggins was a last-minute replacement for Peter Sykes, whose shoulder had been damaged in an accident.

Among the later pieces, several stood out. “Lieber Herr Gott” (O God, awaken us) by Johann Rosenmüller, was a lovely song, expressively sung by Greenleaf. She also sang two songs by composers new to me, with both cornettists, Kiri Tollaksen and Nathaniel Cox. “Frisch auf mein Herz” (Refresh my heart) by Thomas Selle, advises a poor man to marry a rich bride, so that he may be counted on to pay his bills. “Singet dem Herrn” (Sing to the Lord) by Vierdanck, ends with the words “with trumpets and trombones make a joyful noise before the Lord.” And the noise was joyful indeed!

The concert ended with a splendid piece for the whole ensemble by Vierdanck , “Ei, du frommer Knecht” (Well done, thou good and faithful servant). We could thank the consort and vocalists with a variation of the same phrase.