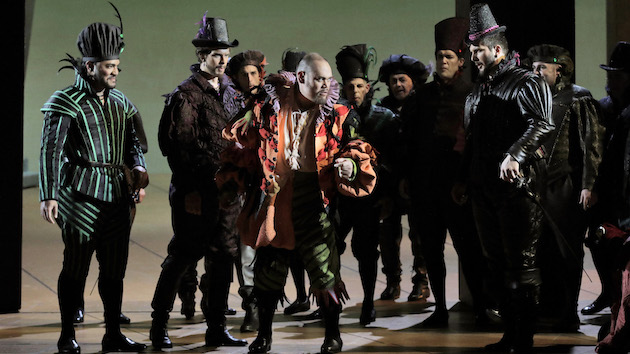 San Francisco Opera’s summer season opened on Wednesday night with an energetic Rigoletto. This will be followed by two more from the ten-most-performed list: Don Giovanni and La Bohème. None of the three are in new stagings (though we’ve been promised an intriguing “reboot” of Don Giovanni). With programming this unadventurous, the thrills have to come from the singers and Rigoletto only partially delivers. The trio of leads is uneven, but Quinn Kelsey’s Rigoletto is, alone, worth the price of admission.

This production has been in San Francisco for 20 years; this is its fifth time on the boards in those two decades. It is striking: Constance Hoffman’s costumes are both sinister and playful — period-inspired in dark hues, but with brightly colored stripes, feathers, and whorls. Their historical silhouettes contrast with Michael Yeargan’s starkly modern sets, inspired by the surreal perspectives of Giorgio de Chirico’s art. The exaggerated slant of the Mantua skyline echoes the hump on Rigoletto’s back. 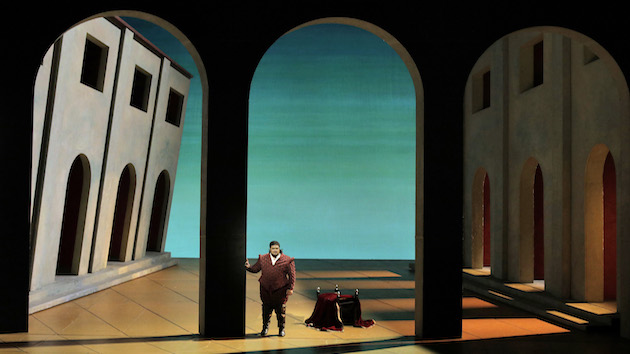 Director Rob Kearley’s blocking is simple and effective, if sometimes overly static. The courtiers’ crowd scenes have a terrible energy to them. Solo singers and smaller ensembles have a tendency to stand and deliver, but the relentless drama of Verdi’s score prevents these intimate moments from getting dull.

Nicola Luisotti led the San Francisco Opera Orchestra in a performance that emphasized that drama. A restrained start to the prelude only brought out the contrast of its crashing ending. The underscoring of Gilda’s death filled the house with sheer melodramatic horror. The orchestra complemented their storytelling ability with great technical precision. The brass ably navigated their difficult parts, and the coordination between instrumentalists and singers was the best I have heard in Rigoletto, particularly in the tricky, conversational first scene. Luisotti’s only fault was a tendency to allow the orchestra to overwhelm the voices. 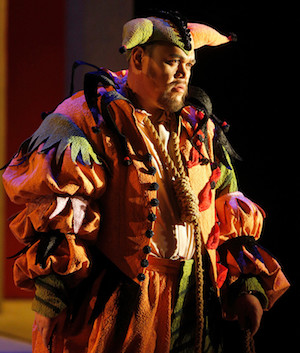 Quinn Kelsey gave a masterful performance as Rigoletto, with smooth, controlled singing and a wide dynamic range. The role suits his voice perfectly, and he sounded effortlessly resonant from bottom to top. Dramatically, he was rarely fiery or spitting, as many Rigolettos are. Instead, his jester was weary and bitterly self-aware, with flashes of hope. The result was intensely sympathetic: The audience gasped audibly when he fell to his knees during the pleading portion of “Cortigiani, vil razza dannata.”

Pene Pati’s much-anticipated debut as the Duke of Mantua was initially marred by nerves. His voice sounded tense and held back in the first act. By act two, he displayed a warmer, more relaxed tone, and he nailed the high endings of “Parmi veder le lagrime” and “La donna è mobile.” As Rigoletto’s daughter, Gilda, Nino Machaidze sounded reedy and strained. Her tone was exciting and rich in her lower range but weighted down and wobbly as she ascended the scale. The obligatory coloratura and cadenza of “Caro nome” were ably executed but failed to thrill. She accompanied her singing with awkward hand gestures that seemed tied to vocal production rather than character. 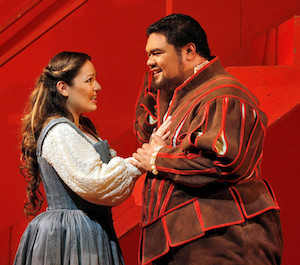 The San Francisco Opera Chorus was difficult to hear in the first scene but made up for it in act two. They impressed with their gleefully play-acted account of Gilda’s abduction and their stony rejection of Rigoletto’s grief.

This Rigoletto didn’t feel new, because it wasn’t. Verdi’s music and the performers’ energy ensured it was exciting all the same.