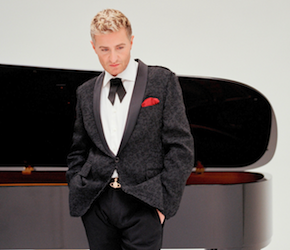 There is no better pianist than Jean-Yves Thibaudet to illustrate the matter of impressionism in music. He demonstrated that in his all-Debussy program presented by S.F. Performances at Herbst Theatre on Sunday.

French composer Claude Debussy is often associated with the term “impressionism.” It was first used in the report of the Secretary of the Académie des Beaux-Arts, from which Debussy received a scholarship for a four-year residence at the Villa Medici. The report read:

“It is very much to be hoped that he will be on his guard against the vague ‘impressionism,’ which is one of the most dangerous enemies of truth.”

Later in his career, Debussy wrote, perhaps in protest to the label:

“I’m trying to write ‘something different’ — realities, in a manner of speaking — what imbeciles call ‘impressionism,’ a term employed with the utmost inaccuracy, especially by art critics. ”

Even so, thousands of professional and amateur musicians have given vague and pointless interpretations of Debussy’s work, perhaps as a result of overapplication of the term “impressionism.”

Certainly, tonal ambiguity from the use of the whole-tone scale, unresolved cadences, and fluttering tremolos that are signature characteristics of Debussy’s music may imply the nebulous and atmospheric nature of impressionistic work. However, that composer’s musical canvas is not at all like Renoir’s canvases, and clearly defined outlines and colors jump out of the blurred sonic background.

In playing the very first piece in the Preludes, Book 2, “...Brouillards” (Mist), Thibaudet illustrated a scenery that’s not all just smeared blurriness in which you can’t detect any shape or form whatsoever. Instead, he depicted objects both near and far, and presented various colors and shapes that reveal themselves fleetingly. On a foggy day, San Franciscans are aware that fog can break for a second to give a brief glimpse of the sky or distant hills.

Under Thibaudet’s hands, the details were in sharp focus while the background was blended into a smooth blur.

Even in the moody “...Feuilles mortes” or in the atmospheric “...La Terrasse des audiences du clair de lune,” using parallel harmony and whole-tone scales, Debussy laid down various layers of colors on his sonic canvas with clear definitions where they matter. Under Thibaudet’s hands, like photographs with selective focus, the details were in sharp focus while the background was blended into a smooth blur.

Thibaudet accomplishes this partly from the use of the middle, or sostenuto, pedal. Seldom used by most pianists, it allows the pedal points to be sustained while the figures above are performed clearly. Given that few European pianos had the pedal in his era, whether Debussy himself implied its use is a subject of frequent arguments among pianists. Yet Thibaudet presented an utterly convincing case that it can be used superbly to isolate the pedal points without producing unnecessary blurring.

Another aspect of Thibaudet’s performance was how he brought out humor so brilliantly. From the ridiculous “...General Lavine – Eccentric” and the naive “Ondine” to the absurd “...Hommage à S. Pickwick, Esq., P.P.M.P.C.,” Thibaudet depicted varying shades of laughter, from a subtle grin and a chuckle to an almost uncontrollable roar of a lumbering idiot.

Another important aspect of Debussy’s music is its fervent Orientalism.

That the New York Times exclaims of this artist that “every note he fashions is a pearl” is no overstatement; it was not at all difficult to imagine pearls popping out of the piano with his every note. Not only were they individual pearls, they were at times woven intricately into fine, exquisite strands. At times, the pearls were the impeccably spherical Mikimoto pearls, and at other times they were bold, large Tahitian black pearls. His sound glowed richly with subtle iridescence.

The second half of the program consisted of earlier compositions by Debussy. The Suite Bergamasque possessed a Mozartean transparency, as if the works could almost be performed on a harpsichord. This may be a coincidence, as the French were the last to give up the harpsichord in the late 18th century, while pianos were all the rage in the rest of Europe. The tempo employed was deliberate yet relaxed, as if to allow every note to establish its presence in the atmosphere. The Spanish-flavored “Menuet” was rendered in an almost Baroque style, and the well-known “Clair de Lune” was illustrated with the piercing clarity of a midnight moon, along with stars and perhaps the Milky Way traversing the sky.

Another important aspect of Debussy’s music is its fervent Orientalism, as depicted in the “Pagodes” in “Estampes.” The use of the Oriental pentatonic melodies infused exoticism, and the vivid yet nuanced colors of Hokusai wood prints were well-preserved.

The recital concluded with a passionate rendition of “L’Isle joyeuse.” It was somewhat restrained in the beginning, but it made for a more intense contrast with the ravishing end. It went well along with the “...Feu d’artifice” at the end of the first part of the recital, which depicted a triumphant firework show on Bastille Day. Indeed, the colors were bright and clear, unlike most July 4th fireworks in often-fogbound San Francisco.

The audience was rewarded with two encores: Brahms’ Intermezzo in A Major, Op. 118, No. 2, and an Earl Wild Virtuoso Etude No. 4, a transcription of Gershwin’s Embraceable You, a nod to Thibaudet’s successful parallel career in jazz.