The San Francisco Symphony has been placing its musicians in the solo spotlight this fall, and the results have been good enough to make you wonder if we couldn’t do without high-priced imports more often. Recent programs have seen the orchestra’s own Mark Inouye (trumpet), Russ deLuna (English horn) and, last week, Carey Bell (clarinet) featured in works by Copland and Debussy. Thursday at Davies Symphony Hall, it was principal bassoonist Stephen Paulson, serving as soloist in Heitor Villa-Lobos’ beguiling, and rarely played, Ciranda das sete notas.

Conducted by Michael Tilson Thomas, the program was heavily weighted toward 20th-century music. Villa-Lobos’s 1933 work shared the first half with Silvestre Revueltas’ 1938 Sensemaya and Edgard Varese’s Ameriques, written between 1918 and 1922. After intermission, it was back to the 19th century for a vibrant performance of Beethoven’s Symphony No. 7 in A Major, Op. 92. 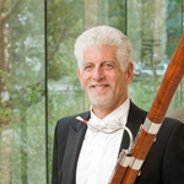 Paulson’s skill and accomplishments are well-known to Bay Area audiences: The bassoonist, who joined the orchestra in 1977, has made essential contributions in performances over the years (he also conducts the San Francisco-based Symphony Parnassus, which in January will perform Paulson’s “Bassoon Concerto” with fellow S.F. Symphony bassoonist Steven Dibner as soloist).

You might have thought that Paulson would have exhausted the limited solo possibilities for his instrument by now, so it was a particular pleasure to hear him in Villa-Lobos’ Ciranda das sete notas. The single movement concerto for bassoon and string orchestra sends the soloist on an in-depth exploration; the “seven notes” of the title refer to the C-major scale, and the bassoon’s passagework reaches to both ends of its range. Villa-Lobos scored the work effectively, imbuing it with a gentle, almost pastoral feel, and the solo part confers nobility on the bassoon. This was the work’s first performance on a San Francisco Symphony program, and Tilson Thomas elicited silken sound from the strings; Paulson played the long-breathed lines of his ambling part with eloquence and considerable poise. Even a sudden mishap — Tilson Thomas inadvertently knocked the bassoonist’s score off his music stand in the performance’s final moments — didn’t detract.

The rest of the program was just as rewarding. Revueltas’ Sensemaya, also receiving its first San Francisco Symphony performance, sounded a little flat-footed coming out of the gate, but Tilson Thomas and the orchestra quickly summoned the score’s swagger, exuberance, and rhythmic drive.

The first half came to a smashing conclusion with Ameriques. Tilson Thomas last conducted Varese’s brash valentine to New York on a Symphony program a decade ago, and he returned to it Thursday with enormous vigor. The score begins demurely, with ruffling woodwinds — a theme for alto flute, played here by Robin McKee, suggests the opening of Stravinsky’s Rite of Spring — then gradually builds an imposing wall of sound (the percussion section alone, which requires nine players, employs sirens, chimes, rattles, whips, and a stringed drum called the “lion’s roar”). 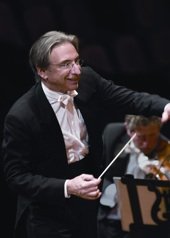 It’s a massive freight train of a score, and Tilson Thomas drove it at full throttle, filling the hall with its sense of barely contained energy. Yet this reading was most remarkable for its restraint; there was purity, and moments of surprising delicacy, amid the controlled chaos.

After intermission, a measure of Varese's velocity carried over into the performance of Beethoven’s Seventh Symphony. The first movement sounded uncommonly assertive; Tilson Thomas conducted at a brisk pace, articulating the composer’s richly textured sonorities in deft strokes. There was superb clarity in the contributions from the woodwinds, led by principal flutist Timothy Day, and an impressive sense of ebb and flow between the sections.

The Allegretto’s low strings voiced with warmth and the necessary gravitas. Tilson Thomas was at his most expansive in the Scherzo, and he drew dynamic playing from every section in the finale. The digital recorders were running, as they will through Saturday, with the Beethoven scheduled for future release on the SFS Media label. Judging by Thursday’s performance, it will be a fine addition to the orchestra’s catalog.