Last week was a big week for Maurice Ravel’s music at Davies Symphony Hall. Hard on the heels of the four San Francisco Symphony subscription concerts that included Ravel’s Valses nobles et sentimentales, Sunday evening saw a large, all-Ravel program by the visiting Orchestre Philharmonique de Radio France under its conductor, Myung-Whun Chung. Yet in a way, the most memorable part of all this was Sunday’s glorious vocalism by mezzo-soprano Anne Sofie von Otter. 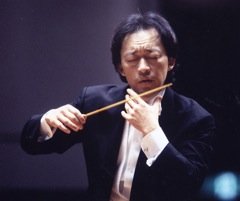 Chung began with the complete Ma Mère l’oye (Mother Goose) ballet score, which was followed by von Otter’s sensational performance of the composer’s Shéhérazade cycle. Following intermission, there were the first and second Daphnis et Chloé Suites. Plus La Valse! The concert was so overpoweringly plush that I wondered if I had been putting on weight via my ears. And to my surprise, Chung conducted all of this long program almost entirely from memory, and with consistent artistry of the highest kind.

“The Enchanted Flute” depicts a maiden at night, awake as her master sleeps, listening to a sensuous flutist out in the night. Whereas “The Indifferent One” covers a woman in her doorway, as a pretty young man passes, and she offers him a glass of wine, calling out, “Enter, and let my wine refresh you. But no, you pass on.”

These songs obviously require a wide variety of emotional timbres, volume levels, and sonic coloration. Most of the singing must be barely above a whisper, and yet there are spots in “Asie” where the singer had to raise her volume to near-Wagnerian levels to overcome Ravel’s fierce orchestral tuttis. 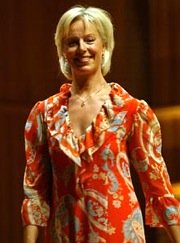 Von Otter, attired in an Asian-style dress of teal-blue sheen trimmed in gold cloth, met the full measure of the composer’s demands. Her control over extreme dynamics, her flawless intonation, her rhythmic accuracy — all seemed so effortless as to be uncanny. She made everything sound as natural and as easy as projecting a chorale in whole notes. Here we heard vocal artistry at its finest.

Mother Goose began life as a set of five easy pieces for piano four hands for children, and then, like Topsy, it just grew and grew. Ravel orchestrated the Suite for a modest-size orchestra in 1911, after which it became an international hit. He then added another orchestral movement and several interludes to form his half-hour ballet score.

The music is, like its composer, filled with childish innocence and charm, and on the podium Chung caught that aroma to a fare-thee-well. Similarly, the moods for the two virtuoso Daphnis and Chloe Suites for very large orchestra were well-judged and to the point throughout, by turns delicate, sensuous, or blazingly bravura. The finale of Daphnis No. 2 felt like running into a brick wall at full speed in an 18-wheeler.

Therein lay the one major problem of the program: It’s impossible to top, or even match, such sonic splendor. La Valse was well-played, yet it failed to make the sort of impression it usually does, standing as it did in the shadow of Daphnis No. 2.

As for the Radio France orchestra, it was fine indeed, highlighted by a superb woodwind section and uncommonly artistic percussionists. The timpanist was amazing in his sensibility to timbre, constantly switching sticks within a given composition to get a match for the section he was supporting at the moment. The brass were acceptable, if a tad messy in articulation; the strings quite able though a little lacking in depth of resonance, especially from the violins.

Still and all, it amounted to a most successful event that brought the audience to its feet more than once. After so arduous an evening for the musicians, no encore was played.