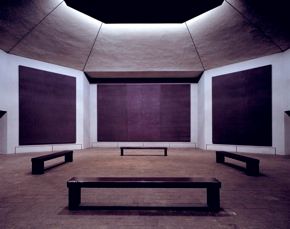 Serenity and Its Absence

Like Alban Berg’s opera Lulu, Mozart’s Requiem has achieved iconic status as one of the great “incomplete” last works that entered the repertories and imaginations of musicians on the wings of the extramusical intrigues surrounding their conception. Both involved composers’ widows with a stake in seeing their husbands’ music completed (or rather, in the case of Berg, not completed). The Mozart is actually a torso lasting under an hour, with three movements composed by a student of the composer, F.X. Süssmayr. What do you program alongside a work so personal, without reducing its pathos to cliches about Mozart saying he was writing his own funeral Mass?

It took 120 years from its American premiere in 1835 for the Mozart Requiem to be played by the San Francisco Symphony. That was in 1965, six years before the composition of Morton Feldman’s Rothko Chapel — written for the dedication of an interfaith chapel in Houston devoted to the work of the painter Mark Rothko. In the spring of 1971, Igor Stravinsky died. It was a time when anyone serious about music, or any composer, whatever “school” his own music might seem to represent, must have asked, “Whither music?” We are still asking. After hearing (and seeing) the San Francisco Symphony and Chorus’ Thursday performance of Mozart by way of Feldman, led by Michael Tilson Thomas, I came away with a completely new conception of the role of “sacred” music in the 20th century.

The program began with a work for solo chorus by the Lithuanian composer Mindaugas Urbaitis. At first it sounded like a transcription of a beginner’s piano piece, with broken chords in the left hand beautifully sung by the basses. This Lacrimosa (1994), masterfully directed by Ragnar Bohlin, clearly pointed ahead to the Mozart. Becoming more “vocal” as it progressed, it gave new life to the key of D minor. When it arrived at the first bars of Mozart’s tearful farewell, probably the last music he wrote, it sang — not only the vocal parts, but the orchestra accompaniment, as well. It was a touching if slightly anticlimactic tribute, like the place in Don Giovanni where Mozart quotes a tune from The Marriage of Figaro and has Leporello say, “I’ve heard that tune one too many times.”

Although Morton Feldman has been claimed as a precursor of “minimalism,” I don’t hear him that way. Like Bach, he’s the end of something, not the beginning. As a disciple of John Cage and a composer wedded to pianissimos and silence, Feldman would seem to be coming from way farther out than left field to meet Mozart. Wandering the stage among five music stands placed like stations of the cross, or a baseball diamond, Symphony principal violist Jonathan Vinocour played a few cryptic notes. The intervals reminded me of something I couldn’t quite place. He moved on until finally, arriving back where he started, he played a melody that was achingly familiar (the Ravel string quartet, perhaps?), but that turned out to be a tune Feldman had written 30 years earlier, at age 15. “In my ends are my beginnings,” it appears.

Given the wide expanse of the Davies Symphony Hall stage and the sparse but dramatic lighting, which focused on soloists distanced from each other (psychologically as well as physically), the delicate percussion by Jack Van Geem and David Herbert and the continuo (or dis-continuo) part on celesta by Robin Sutherland conjured sounds that seemed to come from other worlds. Even the copious Thursday matinee coughing became part of the mysterious atmosphere, which made even Webern sound vigorous by comparison. (One of the audience members told me that she checked her blood pressure after the performance and it had gone down 10 points.)

The Key to the Chapel?

About halfway through, I finally figured out what the intervals might be saying when soprano Kiera Duffy, who had been sitting by herself in the darkened balcony, was illuminated while she sang the first of her two very brief, but intensely moving, solos. I heard Feldman paying homage to the opening of the second movement of Stravinsky’s Symphony of Psalms. It was no more than five, less than a dozen notes: more or less the same ones that had been played by Vinocour. They were notes that said much without seeming to say anything. In both there is a deliberation in which the silences between the notes became eloquent.

Everything fell into, or out of, place after that. The Mozart, after a puzzled intermission, seemed more contemporary than ever. The delirious and pounding rhythms of the “Confutatis” movement sounded deeply confused until the passage “voca me” (“call me”) arrives. Then the music wanders between distant tonalities, like the separate stands in Rothko Chapel, each one seeming plausible yet provisional. Finally, purified by the flames, a heart “as contrite as ashes” (Mozart bows to us) inexplicably heals our own heart in the process.

Hearing the Mozart after the two works from our “tonal or atonal?” age, it didn’t bother me so much that the composer had not lived to complete his Requiem. Sung with real commitment by Kiera Duffy, Sasha Cooke, Bruce Sledge, and Nathan Berg, it was both a testament to inexplicable genius and a moving reminder of our shared humanity. It seemed impossible to imagine anything but the first eight bars of the Lacrimosa, heard for the second time that day, rising step by step as if to conquer unconquerable grief and then breaking off, saying, “I’ve done what I can; you need to figure out the rest.” This Süssmayr did, and with the help of MTT and friends, it was a blessing.