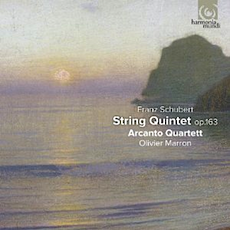 A handful of chamber-music works are seldom played badly on recordings. Indifferent Bach, stodgy Haydn, sloppy Mendelssohn, even hacked-through Beethoven I do run across, but then there are the pieces you fall in love with and ever after do your best for.

Often it’s puppy love, the kind that persists. I doubt that many classical string players haven’t at one point been in love with the Schubert Cello Quintet, and very likely after having heard it (or played it) in their teens. At a music camp I attended more years ago than I like to think, a resonant well, lined with ferns, was on the property; we kids used to go to the well in pairs and sing the cello-duo second theme of the first movement into the echoey space. That theme is almost chamber music defined: It’s melodically exquisite, but you need another voice there, really, to hear the beauty of it.

So this is one of those few, magical pieces almost everyone does well by. All the same, there are degrees of “doing well,” and also different ways of doing it. The Arcanto Quartett (with Olivier Marron as second cellist) have done well by the Cello Quintet in a manner not quite like anything I’ve heard before. Even if you’re awash in recordings of the piece, this is one to hear.

The things that stand out are the variety of articulation, the dynamic range, and the treatment of vibrato. The last is exceptional. There are places in the Quintet where little-to-no vibrato is actually your only option. The long chorale that the middle three strings play through the outer parts of the slow movement is like that — vibrate much, and you can’t blend with the other two players on the chorale, and also you won’t be able to bow slowly enough to sustain the line.

Yet, the Arcantos pare down their vibrato to a minimum in much less conventional places — including that celebrated second theme in the first movement, where the restraint is seriously impressive. The temptation to make a meal of that tune is practically overwhelming.

Even if you’re awash in recordings of the piece, this is one to hear. There’s a cello-duet place in the middle of the finale that’s even more ghostly; you’d think for a moment that you’d wandered into a viol consort recital. And yet within a minute everything is fierce, full-blooded, and very much alive. The detail of articulation is stunning. It’s a performance into which unholy amounts of thought obviously have gone, though it doesn’t sound studied at all, merely (as it were) spontaneously unanimous. A couple of places are so vivid and so unlike what I’ve heard before that I had to replay them instantly. The end of the first-movement development sounds like a choreographed dogfight; I never realized how many snapping jaws are in there.

One chord near the beginning of the finale was so perfectly and insouciantly tossed off that I think I gasped. All through the movement the quasi-Hungarian swagger is just perfect, and the impossible coda is, well, impossibly nimble.

The detail of articulation is stunning. It’s a performance into which unholy amounts of thought obviously have gone. It’s tempting to attribute the minute detail to the unconventional nature of the Arcanto as a quartet. Its members — Antje Weithaas, Daniel Sepec, Tabea Zimmermann, and Jean-Guihen Queyras — all maintain solo careers, and the quartet isn’t together at all for much of the year. But I think the extensive historical-performance experience of Sepec and Queyras has something to do with it, as well. Working in an environment where things like vibrato and articulation are thought of as primary means of expression makes you think differently, whatever instrument you’re using at the moment.

If you’ve never heard the Schubert Cello Quintet, here’s your chance. If you have, but are a little bored with it by now, here’s an opportunity to get unbored.