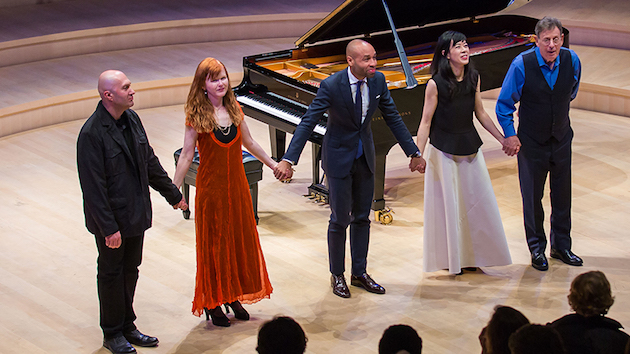 Partisans who rate the quality of modern music by the number of empty seats in the hall must find Philip Glass very frustrating. A concert of his music featuring the composer at the piano sold out Bing Concert Hall last Thursday, September 29, making a spectacular start to Stanford Live’s season.

What’s more, the program consisted of Glass’s complete set of 20 etudes for piano. Since at least the days of Chopin and Czerny, “etude,” meaning “study,” has implied a work more focused on giving pianists an opportunity to practice their technique than on appealing to listeners. Indeed, Glass began this project 25 years ago — it took him over two decades to complete — largely to give himself exercise material.

Thursday’s music all sounded like Glass — tonal, rhythmic, and hypnotic — but it was uncompromisingly diligent and most impressively long. Including one intermission, the concert lasted three hours, and not all the audience stayed the course. I admit to feeling some mental fatigue myself by the end, but the marathon was worth the miles.

One pianist would find it challenging to play the entire set at a go, and one pianist didn’t try. Even Glass himself, scheduled to play four etudes, cut down to three. But then, he will be 80 years old in four months. The heroic Anton Batagov, a robust 50, took up the slack. Glass, Batagov, and three other pianists were scheduled to play the cycle as a tag team — two sets of two etudes apiece — and with that one exception they stuck with the plan. 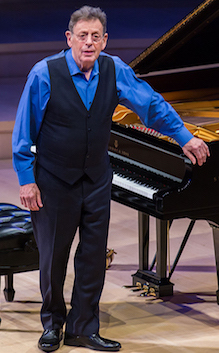 In a preconcert chat, Glass said that he likes hearing other musicians bring their own personalities and interpretations to his work. Why, as he once put it, should he wish to hear other performers being him? He must have been pleased with this concert, for each pianist was strikingly distinct. Many brought out echoes of other composers and styles, especially in the later etudes, which drift away from the strict exercise function of the earlier works.

Glass gets derided for writing ceaseless arpeggios under predictable chord progressions. There is a lot of that in the earlier etudes, but even that style of writing has a long history. Glass’ minimalism consists of being more diligent and dedicated to his patterns than other composers. What his piano music sounds like, however, depends on who is playing it.

Glass himself was the most distinctive pianist of the five. He played arpeggios with uneven, irregular, even clotted rolls, giving an old Romantic aura of emotion to his music. His Etude No. 17 had the deep rumbling of a Liszt showpiece.

The other performers, though they had no trouble achieving individual and emotional expression, did so from a drier, less subjective starting point than the composer. The most evenly rhythmic, even metronomic, work came from Aaron Diehl, perhaps surprising from a jazz musician who specializes in Gershwin and Jelly Roll Morton. But Diehl may be craftier than he initially appears. His Etude No. 13’s train-chugging rhythms never quite broke into ragtime — they just frequently seemed as if they were about to. Similarly, the exotic harmonies of No. 14 were almost the blues — just not quite.

When Anton Batagov first played the etudes for Glass, the composer noted, “When you play it, it sounds so Russian,” to which Batagov replied, “But it is Russian.” The Russian in his playing here came out as a continuous rumble in a quietly dark tone. Beyond that, Batagov played around with styles, with sprightly Spanish rhythms in No. 10, French elegance in No. 18, and elaborate hocket rhythms in No. 15.

Jenny Lin took all her emphasis off the running arpeggios and put it on the chords, which she played in bell-like ringing tones. She brought tragic emotion to the lyrical melody of No. 8 and a Chopin-esque crystalline clarity to No. 20.

Sarah Cahill, a local specialist in recent piano music, gave some of the best performances — serene, lyric, and emotional — despite a fair helping of wrong notes. The slow, quiet, tangy harmony in the repeated chords of No. 5 and the gentle, light running of No. 6 and No. 11, despite the percussive repetition in the former and emphatic Rachmaninoff-like passages in the latter, were especially effective.