Robert Schumann holds a special place in the repertoire of a young and talented pair of musicians, pianist Hillary Nordwell and violinist Monika Gruber, who call themselves the Eusebius Duo. Therein lies a tale: Schumann gave names to the two polar sides of his personality and used them when moonlighting as a critic or even when signing movements in his compositions, "Eusebius" being the introverted, and even depressive, side.
From the joy and enthusiasm that was in evidence on Sunday at Old First Church, I would have thought the other name, "Florestan," would be better for the duo. The two Schumann Sonatas for Violin and Piano enfolded one of Johannes Brahms' loveliest chamber works, the First Sonata in G Major, which shone like a ray of sunshine between these two serious, even tragic works. It was nearly the ideal program to demonstrate their complementary talents. 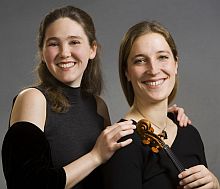 Schumann was nearing the end of his career when he composed his two sonatas for violin and piano. In them you get a synthesis of the two poles of his personality. The first sonata, composed when the composer was 40, doesn't even contain a slow movement, but merely an Allegretto between the two lively outer movements. Poor Eusebius seems to be waiting in the wings. The soulful and the passionate appear to be united in song as it passes between the two instruments.

When playing, Gruber, a fine performer with a wide variety of dynamics, tone, and inflection, seemed comfortable speaking in a conversational tone, as well as singing with her violin. This added an engaging element of dialogue, which is frequently called for in the music. Somehow, the little imitative bits that happen frequently sounded fresh and as though both players were really listening to each other.
Mastering the Poetic Extremes
Of course, you still need a pianist who understands that Schumann's soul truly lives in his piano writing. Schumann started out as a pianist and in his first 10 years as a composer only wrote for piano solo. His music requires a range of expression that extends from manic highs to depressive lows that characterize the poetic extremes found in the early masterpieces, like Davidsbündlertänze and Kreisleriana, plus the ability to adjust to the sound and inflections of another player.

From the moment the two players came on stage, led by the slightly more impulsive Nordwell, you knew that she was up for that challenge. It was marvelous to hear how she gave full emphasis to the piano writing, never being the slightest bit obsequious, and yet never covering the violin line. Indeed, she encouraged the more reserved, but equally passionate, side of her partner.

In Brahms' First Sonata, also written when the composer was well into his 40s, the dialogue between violin and piano deepened, revealing structural subtleties over and above mere instrumental finesse. For example, the return of the theme toward the end of the development in the first movement, before the "real" return in the recapitulation, was beautifully done. The plangent opening of the second movement in the piano was bracing and unsentimental and provided the right backdrop for the entrance of the mournful theme in the violin.

Gruber's many varieties of vibrato were well-chosen and contributed to the thoughtful, "Eusebius" tone of the recital. Given Brahms' tempo marking, Allegro molto moderato, the final movement seemed hurried. However, the ending, which Brahms marks "even more moderate," ended the work in a rapt reverie.

The Schumann D-minor sonata was given a thrilling performance with a pizzicato duet that was intimate and captivating, calling for an encore that was aptly chosen: Bach's Bist Du bei mir.