Like intrepid space explorers expanding human knowledge of the cosmos, the Friction String Quartet is boldly broadening quartet repertoire by commissioning and performing new music. On Sunday evening at UC Berkeley’s Hearst Memorial Mining Building, an ample audience tuned in for Friction’s “Spaced Out,” a program of works inspired by ideas about the universe. Just as cosmic phenomena can be both familiar and mysterious, this performance was accessible yet surreal.

Friction’s young players are as accomplished in their artistry as they are unpretentious about everything, including performance space. While Hearst is beautiful, its three-story atrium and unlocked doors resulted in boomy acoustics and unsuspecting students occasionally wandering in during the performance. These quirks contributed to the concert’s charm. 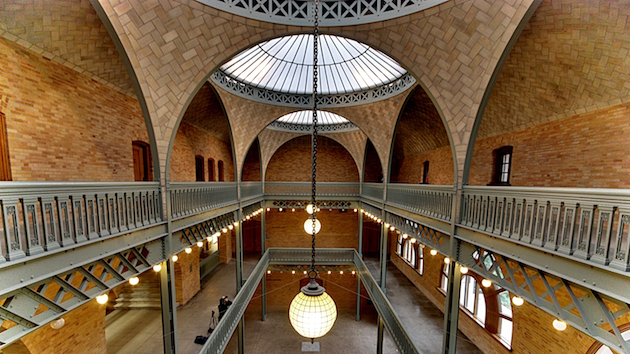 Composer and UC faculty member Jon Kulpa introduced the premiere of his Negative Expanse with an expression of gratitude so heartfelt that I felt like I was eavesdropping on a toast at a stranger’s wedding reception. Commissioned by Friction and the Sounds of Science Commissioning Club — a group that interacted with Kulpa during the compositional process — this work for string quartet and eight-channel electronics is “a sonic journey through a black hole.” The players began with one player in each corner of the space’s perimeter. To mimic gravitational redshift — an observed reduction in frequency and energy that happens upon falling into a black hole — the pitches and rhythms from the performers were, respectively, flattened and slowed through speakers in the room’s center.

Then, the ensemble moved closer to the center of the room along diagonal paths, signaling a new musical section and the crossing of the black hole’s event horizon, where relativistic complications happen to space and time. Particles of sound scattered throughout the room, and whether they were emanating from the quartet members or the speakers became blurrier.

The quartet moved again to seat itself in the room’s center for the final section, which represents being both obliterated and preserved by a black hole. All told, the work is conceptually fascinating and musically compelling. It also seemed staggeringly composite: the players adopted earpieces to navigate their intricate parts even while playing physically dispersed. Two people manned the electronics, and the interplay between all these elements was confounding. Kulpa described Negative Expanse as one of the most satisfying projects on which he has worked; it was easy to hear why.

“Spaced Out” continued with Satellites, a three-movement piece by Garth Knox, who is also the violist of the Arditti Quartet. The first movement, “Geostationary,” was born from the idea of simultaneously moving quickly and getting nowhere. The notion of astronauts seeing many sunrises and sunsets within a single 24 hours prompted bright chords in the second movement to be followed by “dark” passages in which solo players improvised.

Knox’s third movement, “Dimensions,” included a strong visual component. Different sections required bowing both across and — unconventionally — parallel to the strings. Players also rebelliously smacked their amplified instruments like drums, and near the end, they audibly brandished their bows through the air like whips.

Knox’s finale might have made for a jovial conclusion to the program, but Friction followed it with Adam Cuthbért’s universe explosion for double quartet, with the second quartet being on a prerecorded track. This tripartite piece is meant to convey the lifecycle of a universe from birth to death. For me it was deeply calming, and evoked a pulsating orb repeatedly expanding and contracting before ultimately deflating like a weary balloon.

Friction has won numerous recent honors, including a Carnegie Hall debut through a program with the Kronos Quartet. Judging by Sunday’s program of intense musicianship coupled with ambitious programming, Friction’s potential seems — a bit like the universe itself — immense and incalculable.

Correction: This story as originally published failed to mention the Sounds of Science Commissioning Club, the organization that commissioned both Jon Kulpa and Friction Quartet for Negative Expanse, and paid for the piece.