For tasteful, technically assured virtuosity and highly expressive musicality, you won’t find many toppers to Valentin Surif’s piano recital on Friday evening in San Francisco’s Old First Church. That plus excellent programming made for a special evening for those of us who braved the awful weather to hear him. 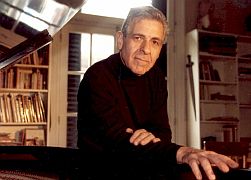 The Argentine pianist split his program into two equal parts, with a sonatina and a sonata in each. He opened with two of his specialities, the 1950 Sonatine of Carlos Guastavino and the fireball First Sonata, Op. 22 (1952), by Alberto Ginastera. With Argentine music served, Surif offered a second half of Ravel’s Sonatine (1905), followed by the big and thorny B-Minor Sonata by Franz Liszt. He played only one encore, Debussy’s “La neige danse” (The snow is dancing) from his Children’s Corner Suite.

Guastavino (1912-2000) was mostly famed for his songs, which were often found in the repertory of major vocalists like Teresa Berganza, José Carreras, and Kiri Te Kanawa. Although he toured widely in Europe as a pianist, his piano music is far less known, at least by me. His three-movement Sonatine is simple, conservative, quasi-impressionistic music full of lovely tunes and savvy piano writing.

It is not unlike the Ravel Sonatine, without imitating that work in harmony or melody. The colors of the piece carry the aroma of Argentina, and in it there’s something of the melodic inflections of Astor Piazzolla’s famous tangos. On the other hand, Guastavino avoided any notable tango or gaucho rhythms. It’s a wonder that it doesn’t show up more often on recitals, since it’s playable and most effective.
Sobered by Bartók
Ginastera’s sonata, the first of two, is made of sterner stuff. As with many composers, Ginastera writes music that falls into three periods. His early works, from the late 1930s to the early 1950s, veered toward a Coplandesque folk style with strong Latin flavors. Best known are his 1936 ballet, Panambi (Op. 1), and the Variaciones Concertantes, Op. 23, of 1953.

By the early 1950s, however, Ginastera had discovered a more advanced means of handling national colors as he increasingly came into contact with Bartók’s music. From these experiences bloomed the aggressive First String Quartet and First Piano Sonata. Then, into the 1960s, Ginastera toyed with a serial music style that came to dominate his late works.

The four-movement First Sonata is a virtuoso display piece that requires both savage pounding of the keyboard in the first and last fast movements, and the most subtle delicacy in the superfast, but quiet, scherzo — a little like the finale of Chopin’s Second Sonata — and the pensive slow movement. This sonata demands the full panoply of artistic abilities from the performer, and in particular a keen sense of architecture to maintain the formal balance of the piece. Surif’s performance was close to definitive, wildly assertive or purring with lyricism as the musical moods shifted.

Surif’s lyrical strength and light, stylishly French touch came into play during the Ravel. He moved things along, adding subtle, light bits of rubato here and there, letting his fingers flow through a relaxed interpretation of the composer’s homage to the 18th century. Best of all was his utter lack of sentimentality. Ravel intensely disliked gooey playing in his music. As he once complained to a young pianist, “Madame, I wrote a pavane for a dead princess, not a dead pavane for a princess.”
St. Valentin Tames a Monster
It goes without saying that Liszt’s large tone poem-cum-sonata is a dragon to play. It’s a masterpiece that can easily sink into silly trivia. But if a pianist has musicality and nimble fingers, you end up being bowled over by the performance’s heroics. One particularly ticklish spot is the big Grandioso section, which can sound heroic or vulgar depending on the way it’s played. As with Ravel, the section has to move along without pomposity. Too much melodrama and it will evoke snickers.

Here, as all evening, Surif’s playing offered the epitome of good taste, a sign, perhaps, of artistic maturity. He stretched phrases a little here and there to let the musical line breathe. Those always hit the mark, free of exaggeration. He sometimes misplayed a note, but in this work that’s to be expected. I’d seriously doubt most people noticed.

The most surprising part of the concert was Surif’s ability to completely transform his playing to meet such a variety of styles. He could be rambunctious for Ginastera and Liszt, or almost breezy for the lighter Guastavino and Ravel works. He was the complete pianist, ever adjusting to the composer’s needs, not just his own. The finest actors do that, and so can the finest musicians.