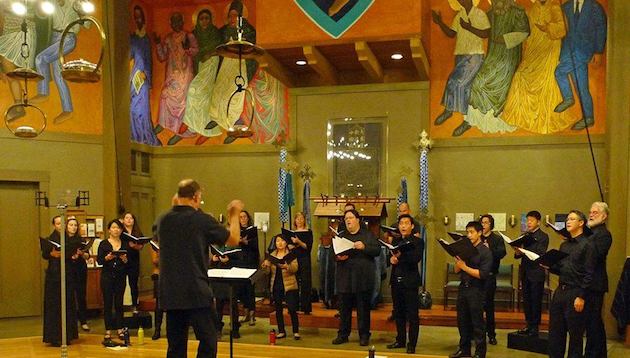 The colorful mural of the 100 Dancing Saints in St. Gregory of Nyssa's Church in San Francisco was the perfect backdrop for the opening concert, poetically titled "Want Me: Songs of Longing and Desire," of Volti’s new concert season, last Friday.

Because of the monumental icon, the interior of St. Gregory is not only visually arresting, but — the occasional outside sound notwithstanding — also an excellent acoustical environment for Volti’s 20 magnificent voices and their sheer infinite expressional capabilities.

For an ensemble that is dedicated to the ‘discovery, creation, and performance of new vocal music,’ performing a world premiere is almost a matter of course, but for this concert, Conductor and Artistic Director Robert Geary had programmed no fewer than three: Want Me and Allergy by Carl Schimmel; and Dawn by Mark Winges, who is currently Volti’s composer/advisor in residence.

"Dawn" is the first movement of a larger composition Pandora’s Gift, based on the Ancient Greek myth of Pandora’s Box, containing all the evils of humanity. The 35-minute work for voices will be premiered in a fully staged version in May 2015, by Volti and the Piedmont East Bay Children’s Choir.

Winges describes the text by poet/translator Denise Newman for Pandora’s Gift as “a perfect mix of curiosity/the calm before the storm/apprehension.” His composer’s note reads: “The music reflects these elements. It is a combination of fast and slow, words that are clear, text that is obscured, sung sounds, spoken and other non-sung sounds, culminating in a whispered ‘furious’ as Dawn dissolves into coordinated chittering and hissing.”

That very factual description doesn’t do much justice to the magnificent, atmospheric soundscapes Winges draws with his musical imagery, but it considerably raises the level of anticipation for the performance of the completed composition, next May.

San Francisco poet Melissa Stein supplied the text that Carl Schimmel set to music in his compositions Want Me and Allergy, the other two world premieres on Volti’s program. Schimmel arranged the luscious words of Want Me in thick, densely layered tone clusters, savoring the sound of the words, whereas the list of real or made-up allergens in Allergy (a 2014 Volti commission) became a swirling whimsy of sound and words, ascending and accelerating up to a midway climax, after which the composition slows down, falls apart and unceremoniously lands on the word “tongue,” in another loudly whispered ending.

On of the most beautiful moments of the concert was the performance, right after intermission, of In Lumine by Huck Hodge. With the singers positioned far apart, the piece worked almost like a sound sculpture. With whispers, hisses, whistling, droning voices, and all kinds of other fascinating sound effects, it created such enchantment that audience hesitated to start applauding when it was over.

Another treat, in the form of two (of four) Ecstatic Meditations by Aaron Jay Kernis, to texts by medieval mystic Mechtild of Magdeburg, concluded the concert. It didn’t take much imagination to see St. Gregory’s Dancing Saints enticed by Mechtild’s example in I Cannot Dance, O Lord (unless you lead me), which ends in a spiraling repeat of “whirling, whirling, whirling”.