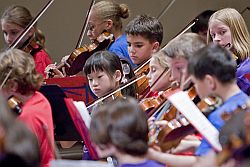 What is the ideal age for a child to start learning an instrument? The answer is: it depends.

No matter what the instrument your child needs to be mature enough to be able to focus on formal learning—the age of reason, so to speak—even if it’s just for a relatively short period of time. For piano and string instruments, the general consensus seems to be that you can start formal lessons around age five, or even earlier, in a Suzuki program, although some teachers would still wait until age eight or the third grade. For other instruments, waiting a bit longer will actually give your child a better chance of success. The A music school, for example, doesn’t start students on guitar, bass guitar, or drums until they’re age eight, and many teachers recommend waiting until ages nine, ten, or eleven to start lessons on other instruments. According to Dianna Gomez, who is band director at Presidio Middle School and has taught at lower levels, fourth graders have an eighty percent chance of failure. She finds that fifth graders, on the other hand, have about an eighty percent chance of success.

A lot of it has to do with physical size. Often, smaller-scale stringed instruments are readily available for children, and while a small child will not have the reach of an adult, they can still play basic chords. But it takes a certain amount of arm and body length, wind power, and small-movement coordination to play other instruments. For example, a flute, clarinet, or trumpet might still be too big for a fourth-grade child. Joan Murray, founder of the Golden Gate Philharmonic and a public school orchestra director, points out that younger and smaller children simply cannot play a trombone.

When it comes to vocal lessons, most choral groups won’t accept applicants until they are at least five years old. Before then, they encourage parents to let children experiment with their voice and singing and discovering the sounds they can and can’t make, and help them learn things like how to hold a pitch and even start learning how to sight-read music. Once a part of the group, they need to be able to keep pace with the rehearsal. One thing all vocal coaches agree on is to take care not to strain or push a child’s voice. It’s very easy to damage a voice at an early age.

No matter at what age your child starts, experts agree that finding a teacher or program that also stresses learning music theory at the same time helps speed progress. Even before your child begins formal lessons, you should also expose your child to all types of music, from classical concerts to church choirs; Murray suggests sitting up front, where children can actually see the orchestra or band. She also suggests listening to recordings and helping children learn which instrument makes each sound. Local music groups often have concerts tailored for kids, so search them out. Above all, encourage children to move and sing along with the music they hear.