The San Francisco Bay Area is home to a quartet of famous jazz music festivals. Here they are, in order of appearance. 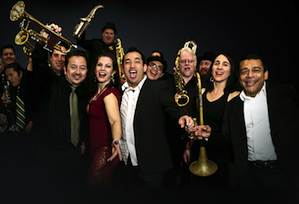 The festival is currently running through June 22 and is put on by SFJAZZ, which, since its founding in 1983, has become the fountainhead of jazz in San Francisco. The organization has a varied mission that includes educational outreach, notably the SFJAZZ High School All-Star program; family matinees; and Discover Jazz classes, including master classes. Note also the Jazz Lab where you can take classes in digital music production. Also under the umbrella is the SFJAZZ Collective, an all-star ensemble with eight top performers/composers in jazz today. They next perform at the Newport Jazz Festival on August 2. SFJAZZ resident artistic directors include Regina Carter, Bill Frisell, Jason Moran, John Santos, and Miguel Zenon. 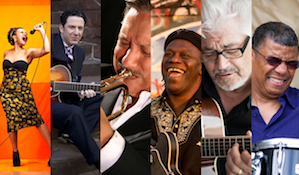 The festival is put on by the Stanford Jazz Workshop (SJW), which grew out of informal jam sessions at a campus coffee house know as CoHo in 1972. Forty-two years later, SJW has become one of the nation’s mainstays in the study and performance of jazz. In addition to the festival and various summer programs in which students, of all ages, can find mentors, SJW serves educators and musicians in schools , offering partnerships and scholarships, along with a new middle school program called the Giant Steps Middle School Big Band. 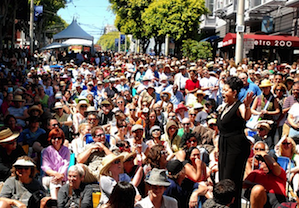 One of the city’s summer highlights: a street fair and jazz happening on that iconic spine that runs from the lower Haight up to Pacific Heights and down into the Marina District. It’s a street connecting rich and poor, and was once the city’s Holy Land of jazz, and, one might argue, rock as well. Consider the music royalty that played at the Fillmore during the 1960s, from Aretha Franklin to Jefferson Airplane. Incidentally, the building in which you’ll find the Marcus Bookstore, at 1712-1716 Fillmore St., was once home to Jimbo's Bop City, that illustrious jazz nightclub in the ‘40s and ‘50s. The building was moved from its old location on Post St. to Fillmore St. during redevelopment of the area in the 1960s. Marcus’s is the oldest continuously running African-American-owned bookstore in America. As for the street fair, it’s wildly popular, with a different band on every block and endless stalls filled with food, jewelry, and political pamphlets. Don’t miss this. And use public transportation if you can.

Who: Artists include, among others, The Arabelle Schoenberg and Nora Stanley Group; Faye Carol and Kim Nalley (she is very special); Waves of Silver; Anna Kristina. On Sunday: the Oakland Jazz Choir; Kitty Margolis; Pamela Rose with Wayne De La Cruz and Hammond Organ Party, among others.

Where and When: Saturday and Sunday, July 5, 6. (Rain, no matter how unlikely, or shine). From about 10 a.m. to 6 p.m. both days. Fillmore St., between Eddy and Jackson. There are four stages. Admission is free. 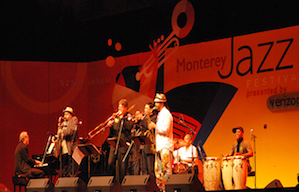 In 1958, Dave Brubeck played for the Monterey city council as part of an effort by San Francisco jazz radio broadcaster Jimmy Lyons to gain permission to hold an annual, weekend music festival. They were putty in his hands. What followed is one of the great stories in jazz presentation.

The festival is a nonprofit educational corporation; all proceeds go to music education. Incidentally, the definitive coffee table book on the festival is The Art of Jazz: Monterey Jazz Festival / 50 Years, written by the Zimmerman brothers, Kent and Keith, the identical twins who live in Oakland and are known for their many books on music legends. They have been quoted to say, “While jazz radio and major labels cut back on musical choice and commitment, the Monterey Jazz Festival has widened its scope by expanding the parameters of jazz, blues, and rock. … Happily, MJF is now as diverse and vibrant as Lyons imagined it ever could be.”

Who: 500 artists on eight stages. ‘On the grounds’ you get, among many others, the Christian McBride Trio, Red Baraat, Cecile McLorin Salvant; the Harold Mabern Trio; the Melissa Aldana Crash Trio; Gilberto & Getz; the Sarah McKenzie Quintet; Lisa Fischer; Ana Popovic. Not to mention a number of top high school bands, from around the country. In the arena, of course, you get the famous names: Herbie Hancock; Robert Glasper Experiment; Gary Clark Jr.; Booker T. Jones; John Batiste & Stay Human, Michael Feinstein; the Charles Lloyd Quartet, to name a few.

Where and When: Friday through Sunday, September 19-21, 11:30 a.m. to around midnight; Monterey County Fairgrounds.There are daily and weekend packages. Arena three-day packages run $290-$580. Three-day access to concerts on the grounds $50-$125. Parking, available as another package, is $45. montereyjazzfestival.org.