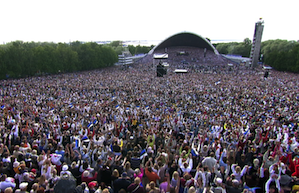 Once more Maestro Robert Geary has gone off to Estonia, along with his passport to international citizenhood, his 40-strong Piedmont-East Bay Children’s Choir to the Laulupidu Song Festival in the capital, Talinn. This is a rare and hallowed invitation — to join with 30,000 other child choristers before an audience of 75,000 or more at one of the most revered choir festivals in the world.

The two-day festival is held every five years, in July, and has been designated by UNESCO as one of the Masterpieces of the Oral and Intangible Heritage of Humanity. That’s one indication of why Laulupidu always signifies a moment of personal and national reaffirmation and renewal, and at the same time, for some, a moment of soul searching.

There is much to find in Estonia’s soul. It is that ancient, northernmost Baltic state claimed over the last 800 years by various European powers. And so a history of relentless supervision, debasement, and forced identities, with the result that Estonians have been both victims and perpetrators. On the one hand, in the 1930s, tens of thousands of Estonians were murdered or sent to the gulags during Stalin’s Reign of Terror. On the other hand, in 1942, Nazi collaborators in Tallinn killed nearly all the Jews in the city, 932 by one account. Later, some 5,000 non-Jewish, Soviet collaborators were also killed. 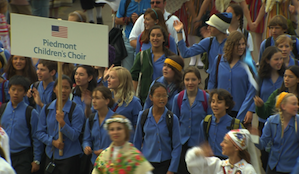 How do you fashion identity — and salvation — from such a tangled past? One answer has been music, singing in particular, which has also been empowering politically. In 1991, with Russian tanks idling at intersections throughout the capital, Heinz Volk, a Havel-like character in Estonia, both politician and artist, coined the term “The Singing Revolution” along with the slogan, “One day, no matter what, we will win.” That became a rallying cry throughout the Baltic states and in Estonia lead to a tradition of night-singing concerts on the Tallinn festival grounds.

The Singing Revolution began in the spring of 1988 with the Tartu Pop Music Festival followed that fall by another, even larger, festival called the Song of Estonia. It was one of many that finally ended with independence on August 20, 1991. In that way, the Laulupidu Festival is a legacy of that time and a profound act of reconciliation.

“When Estonians sing you are immediately aware of their sense of beauty, of commitment, of joy.” — Robert Geary, director Piedmont-East Bay Children’s Choir

“The strength of the human spirit is not to be underestimated,” Geary wrote from Talinn earlier this week. “The Estonians have suffered so much, but they have not gone adrift. In their music and in their persons they seem grounded and strong. They are very worried about Putin right now but have been through this kind of thing before. When they sing you are immediately aware of their sense of beauty, of commitment, of joy. It is just a wonderful experience. The Estonian language is also very musical and it just turns into song.”

To Breathe as One

The Piedmont International Touring Choir includes 46 choristers, 7 boys and 39 girls, all between the ages of 12 and 18. They represent 19 different schools throughout the East Bay.

Andres Beck-Ruiz has been singing with the Piedmont Choirs for six years and sent an email on Wednesday, July 2, from Estonia with this anecdote.

“Today, after spending time with the girls from the Estonian choir we were waiting outside before dinner was ready. We were all a little impatient since it was taking so long, so we decided to play a game called “Pony,” in which we run around in a circle singing songs that our choir enjoys.

“A couple of my friends and I immediately began singing and clapping and forming a small circle. Eventually, more and more people began joining even though the Estonian girls had no idea what was happening. But they caught on and started mimicking what we were doing. After a couple minutes, the game was in full swing and everyone was laughing and smiling and enjoying themselves.

“This was a significant moment in our tour so far because of how the girls joined in without knowing anything, and in the end were all laughing and having a good time and so were we. This showed how easily two countries across the world that speak completely different languages can bond and communicate, and that meant a lot to me.”

A 2013 documentary film about the Piedmont choir’s last trip to Talinn in 2009 will air on KQED on July 5 at 6 p.m. The film, To Breathe as One, was made by James and Maureen Castle Tusty and features choristers talking about their experience, as well as the history of the Laulupidu festival, which opened in 1869. The initial festival was to celebrate the anniversary of the end of serfdom.

“This showed how easily two countries across the world that speak completely different languages can bond and communicate, and that meant a lot to me.” — Anders Beck-Ruiz, member, children’s choir

One singer on the trip in 2009 is Akela Franklin-Baker. She was in the chorus for eight years and majored in vocal performance in college. She wrote the other day to say, “singing has become less of a hobby for me and more of a lifestyle choice. It is the thing that makes me happiest, most fulfilled, and most confident. The Estonians take this to a higher level. For them, the idea that “singing is life” exists in the truest sense. Singing together is the definition of their culture, freedom, national pride, and unity as people. It fills their very souls. It was a huge honor to be able to join the Estonian people in the Laulupidu. If I had to describe the experience, it was like I could feel love coming off the souls of all 30,000 people singing around me. Sounds cheesy, but its true!”

The Piedmont East Bay Children’s Choir program offers a series of music camps, which begin in both the middle and at the end of July and still has openings. However, the drop-dead date for applying to the camp beginning on July 30th is July 15th. There are four camps.

Camp Joyful Voices is much like a conventional fishing and marshmallows-by-the-fire camp, only with a lot of singing. For children ages 7 to 11. Tuition: $985 for the full week. A 10-day Performance Level Choir Camp begins on July 30 through August 10. For concert choir, ensemble, and interested children, ages 12 to 16. Many of the choristers returning from Estonia will join this camp. For more information about these camps and others: https://piedmontchoirs.org/camp.