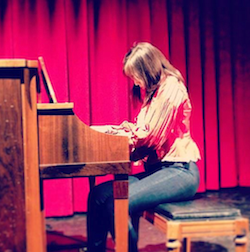 Last week Anais Azul went to look at the music program at Boston University, where she’s been accepted for college. She’s a 17-year-old senior at Berkeley High and while BU was not her first choice she came away from the visit in a swoon. In a swoon from seeing both the university and Boston, itself: those glorious magnolia trees, the city’s architecture and history; the sheer wealth of resources, and for her, especially, the feeling of a cozy bohemian city. Not overwhelming the way frenetic Manhattan can be, or by the same token as rustic as the hinterlands of New York, at the University of Rochester, another school she looked at, or for that matter, as impersonal and Shanghai-like as she’s come to find downtown San Francisco.

“Definitely the right place for me,” she felt as she took a tour of the campus and the city around it last Saturday morning — not to mention new grand pianos in all the instrument practice rooms, the dazzling technology at your beck, the way you need to swipe a card just to get into the practice rooms, the way you can change the sound settings in a room to give the effect of a cathedral or a night club. You name it. In other schools, you go into the practice rooms and you can always hear others playing, no matter how faintly. But not here. The silence itself said all there was to say.

Privilege was the word that came to mind to describe it all.

And on that morning, last Saturday, before returning to the Bay Area, the end point on her tour was the plaza downtown where she was able to see the activity involved in readying the finish line for the 117th running of the Boston Marathon.

“It was very scary to hear news of the bombings,” Azul told us earlier this week. “But it hasn’t deterred me. I’m still going to move. After all, that could happen anywhere. It’s hard to prevent those kinds of attacks; now there will probably be even more security.”

Azul, who is set upon a music career, has an interesting biography, and one that may serve as preparation to live in post ‘415’ Boston.

She was born in Lima, Peru in 1995, to parents who are both relatively well known local visual artists and poets: Susana Aragon and Adrian Arias. Arias is a multimedia coordinator at the Mission Culture Center for Latino Arts in San Francisco.

Azul was four when the family moved to Berkeley, and so began her journey to the arts. “Some of my best memories growing up were going around with my parents as they went to poetry readings or recitals in North Beach or in the Mission. I remember falling asleep in art galleries and listening to people with crazy new ideas. Someone once said to me, ‘once you meet normal people, you’ll change.’ But for me ‘strangeness’ is normal. It’s among ‘strange’ people that I feel most comfortable. That’s where I find newness. I think if you want to be an artist, and if you want to be a visionary, which I would like to be one day, then you’re always looking for experiences that are new and original.”

Azul attended the Longfellow Middle School before going to Berkeley High. She took up piano in 2009, and then a year and a half later began writing music, deeply inspired by Karen Wells, the orchestra director at Berkeley High. Last summer Azul took a workshop at the John Adams Young Composers Program at the Crowden Music Center in Berkeley and has learned the geography of cellos and clarinets and how to use various software programs.

“That got me listening to sounds in a different way,” she says. “I’m always listening to the world around me: a car zooming down the street, finger nails tapping on a table, the sound of skateboard wheels. Or dry leaves. I love to hear that sound of leaves crackling. I’m always collecting sounds and that’s how I think of musicians — as ‘ecologists of sound’ — always sampling and organizing the chaos of sound. Cleaning things up. And so everything has the potential of being music …”

“Right now I’m writing a piece for a flute, piano, cello, and bass quartet. It’s a very challenging ensemble to write for. When I start something I always start very intuitively and by improvising. In this piece I stumbled into a water theme, and so I went with that, and wrote something based on all kinds of water sounds: a water fall, rain drops, driving rain, water in all its forms …”

“The way I make my music I’m not always thinking of the goal or the overall ‘meaning’. But in this case I will dedicate the piece to the victims and families in the (Newtown) Connecticut shootings. And now after these bombings, which were also dedicated to the victims of Newtown, that’s also affected me. The way I think of it is that water connects us all to each other. It's a basic unit of life, and if this piece has a meaning, it’s not what we hold in common in death but about what we share in life and how to appreciate life.”

On Saturday May 18, the Crowden Music Center will present 10 new works by several members of the John Adams Young Composers Program, including a piece by Anais Azul. The performance, which features members of the Left Coast Chamber Ensemble, will begin at 7 p.m. and is free. Composers are aged 10 to 18.