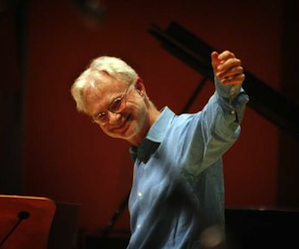 Time again to celebrate the birthday of John Adams, the man who The New Yorker has called “maybe the most vital and eloquent composer in America.” He turns 66 this weekend, still finding musical expression for the American zeitgeist.

He began composing at 10 and first heard his music played just a few years later. Last year he composed his Saxophone Concerto, which he notes in his blog was quite a stretch from The Gospel According to the Other Mary, his much heralded, three-hour oratorio. Nevertheless, the concerto reflects a lifelong affection for the great jazz players such as John Coltrane, Eric Dolphy, and Wayne Shorter.

It may also be a reflection of his ‘people’, including his mother who occasionally sang in a professional jazz band in the 1930s. In his 2008 book, Hallelujah Junction, Adams wrote: “She had a commanding stage presence and a rich, powerful voice. I suspect she was attractive and sexy. Even in her 60s she could stop a noisy party of celebrators in its tracks with a gutsy rendition of “Won’t You Come Home Bill Bailey?”

Adams’ birthday coincides with the 30th anniversary of the Crowden Music Center, which includes the John Adams Young Composer Program. The program was established in 2007 in honor of Adams, who is also a long time Berkeley resident, and once a year comes to the center to teach a master class and find out what young composers are writing these days. 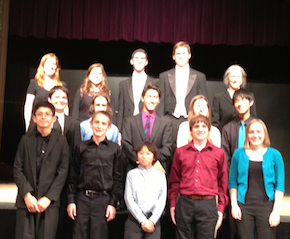 The Young Composers Program may be unique in this country, in terms of depth and scope. But it is particularly noteworthy because it’s open to children as young as 7 and also because it draws out the unruffled imagination and encourages creativity, as opposed to forcing young musicians to become mere vessels for the great classical composers. The spirit of the program is largely improvisational, which, of course, is rarely taught in classical circles and reflects John Adams’ own affection for jazz.

The program allows students to participate in regular weekly group workshops with program faculty, and to attend master classes with visiting artists, including the likes of the Left Coast Chamber Ensemble, composers David Conte and Samuel Carl Adams (a Crowden School graduate), and the San Francisco Choral Artists Quartet, directed by Magen Solomon.

“What’s beautiful about the program,” says its director Marty Stoddard, who also teaches music at the Lick Wilmerding School in San Francisco, “is that it leaves room for a lot of different perspectives and the whole goal is to provide the tools for young musicians to express themselves and create a structure [for them] to really hone their craft.”

“What’s beautiful about the program is that it leaves room for a lot of different perspectives.” - Martha Stoddard, director, JAYCP

She goes on to say that sometimes kids in the program get an idea but because it’s their idea they don’t know to question it, or how to question it. When John Adams comes, he gets directly to the point. “He’s not going to sugar coat anything, and so he’ll ask, ‘Where is this piece going?’ ‘What do you want to say here?’ He always wants kids to become realistic judges of their own work.”

Last March, Anais Azul, then a 17-year-old senior at Berkeley High School, took a master class with John Adams. She’ll never forget the moment when he spoke to her.

“He was asking us to show him some of the music we’d been writing and after it was played he told me he didn’t see it having a trajectory. I’d felt pretty good about the piece but then he showed me how it could become much more developed, how there were tricks you could use and how it could really become something. I’d always thought of music in terms of melody and harmony and I hadn’t realized the real challenge — to become rhythmically engaging.” 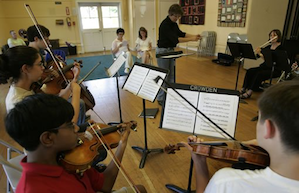 But it was a moment when Adams came out to meet her father that Anais will never forget.

“It was one day when I was being picked up and [Adams] just said, ‘I’m going out to meet your father,’ and he comes and he introduces himself and he says, ‘you know, she’s really got something, she has real talent’. And that just meant so much to my family, particularly my dad. You know, coming from such a renowned composer and you just wouldn’t expect that. It was an act of true kindness.”

Robert Yamasato, a composer, is a member of the Crowden faculty, and a lecturer in the Music Department at UC Berkeley. He remembers the time last year when Adams dropped by a weekly meeting of young composers.

“I remember him asking the students if they could sing their own compositions. A few students raised their hands, but most sat silently, probably anticipating the advice that was to come … Instead, Mr. Adams remarked something to the effect of, “oh, for those of you who can, that’s good … I don’t sing my music because I’m not a good singer. I wish I could.” And at once the expected ice between an established composer and slightly intimidated teenagers began to melt.

“I’d felt pretty good about the piece but then he showed me how it could become much more developed. I’d always thought of music in terms of melody and harmony and I hadn’t realized the real challenge — to become rhythmically engaging.” - Composer Anais Azul

“The “teacher/student” relationship was not a relationship that Mr. Adams wanted to foster. He was more interested in what music the students’ listened to, their sense of humor, and in general, their worldview. Although he did give concrete advice, I never got the sense that he was there to communicate universal truths to the students.”

Composer Sivan Eldar, now working on a Ph.D. at UCB, is another program faculty member. Asked about John Adams, she replied, “You know how some teachers are either too critical or too complementary; he has just the right balance. I think it comes from the fact that he doesn’t teach often and so he’s not jaded; he’s genuinely excited.”

And she added, “It's really about how John sees the JAYC students as young emerging composers, as the future of music, and as part of the music ecosystem. The program is not about teaching young children how to write a fugue or a sonata in a certain style. Really, it is about helping them explore their own voice, even at a young age. And to let that unique voice be heard in the highest level possible.”