Aaron Copland, born 113 years ago today, was famously dubbed “the dean of American composers.” He has written some of the great “Americana” scores that we know and love: Billy the Kid, Rodeo, Fanfare for the Common Man, Appalachian Spring, Old American Songs — scores that made him famous, and which we still hear in TV and film scores. 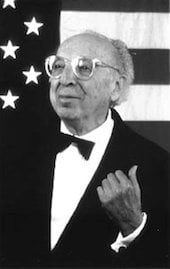 But he was also a “dean” in the school sense: He was a mentor to scores of young musicians, including, preeminently, Leonard Bernstein, who also became a great conductor of Copland’s music. He wrote a number of articles about modern music and composers and kept up with new styles, the way a scientist might keep up with new discoveries.

Copland’s “populist” style, however, was partly born out of financial necessity. When he came back to America in 1925, after having studied for three years in Paris with the composition teacher Nadia Boulanger (who had already acquired her formidable reputation), he was caught up in the modern styles of the moment. A few years later, the Great Depression hit, and by 1933, when Franklin Delano Roosevelt was inaugurated as president, even the frugal Copland was under pressure.

Copland was also influenced by his association with the artists’ circle around photographer Alfred Stiglitz, which included a number of people taking inspiration from the American West and the ideal of representing American democracy in art. And by 1936, politics was taking a hand in the development of Copland’s interests: The civil war in Spain (1936-1939) caused people on the political left (like Copland) to form a “Popular Front” to defeat Fascism. Part of that program involved “art for the masses.” All of these influences formed the music we associate with Copland now.

But Copland never left his European modernism completely behind and some of his later scores like the Piano Sonata and the orchestral work Connotations round out the picture of a complicated composer.