The Cypress String Quartet returns on May 4 for two weeks of free concerts. The program includes the complete string quartets of Beethoven, whose works are at the heart of their repertory.

It’s also a celebration of the quartet’s 20th anniversary; a thank-you gesture to San Francisco for having been such a reliable host all these years, and also what you might think of as a dramatization of the ‘gospel of unexpected beauty.’

The Cypress comprises violinists Cecily Ward and Tom Stone, violist Ethan Filner, and cellist Jenny Kloetzel — with whom we spoke earlier this week. She is forever a woman in love with Beethoven, both his genius and its effect. She is also one of the founding members of the quartet, a much decorated music veteran of concert tours in this country and abroad, a Juilliard graduate, a Baltimore native who plays a cello made in 1701 by Hieronymus Amati II, a member of that illustrious family of Cremonese string instrument makers.

“Often,” Kloetzel told us, “people dismiss this music because they haven’t had an experience with it. We wanted to do this project as a way to offer the unexpected, so that someone walking by might stop and listen and go, “wow! I didn’t realize what a string quartet really sounded like, and I had no idea how much I would like this. I want to know more.”  And so we cast this as a way for a wide range of people to have this experience, first by performing in every district in the city but also by making the concerts free.”

Kloetzel paused and then added, “One of Beethoven’s defining qualities is that he plays with all of our expectations, and we, ourselves, as musicians, are playing with everyone’s expectations as well.”

The series begins at St. Anthony’s Dining Room, that iconic refugee in the Tenderloin District, on the corner of Golden Gate and Jones, where for 40 years Fr. Floyd Lotito was the Franciscan friar in residence in his robes, Sicilian smile, and baseball cap, chatting it up with people in line for dinner, blessing the animals and cab drivers alike. He died in July, 2009.

Kloetzel cautions that the CSQ wanted to perform in every district but not only at landmarks. “We wanted to reach out to places where people wouldn’t expect to find a quartet, and here, at St. Anthony’s, although you could say it’s iconic, it’s also unusual and it seemed natural to start here with the first quartet (No. 1 in F major, Op. 18) — if only because the second movement is so beautiful and passionate. It’s really inspiration on the deepest level. That seemed appropriate.”

Another location was San Francisco General Hospital, which made a ready match for quartet No. 15, Op. 132. “Beethoven wrote this when he was sick, and trying to regain his health. It was written in Lydian mode. Why did he choose that? I think because it captures a magical air, along with the kind of energy you need to get up from your bed and be made well. A literal translation of the German title is a “holy song of thanks given to the godhead from a recovering convalescent.” For us, playing this at the hospital made perfect sense.”

And then Sutro Baths at Land’s End. The foundation of that Ozymandian ruin is all that’s left, but Sutro Park is still magnificent. The quartet will play Quartet No. 14, opus 131. “Arguably,” said Kloetzel, “the most revolutionary string quartet ever written, in seven movements and played without pause. It’s written in C-sharp minor, an interesting and dark key, which makes for a stormy piece and the perfect accompaniment to crashing waves.”

Out of Their Everyday 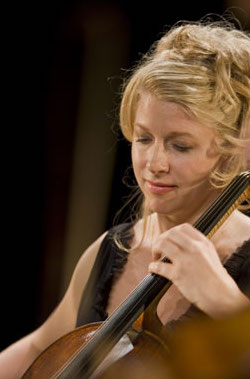 “Our hope,” Kloetzel explained, “is that people will be transformed in some way, even if only in a little way. If only to be taken out of their everyday. If only to spark curiosity. And if you ask, ‘but how do you make Beethoven new in this day and age?’ the answer is that we’re not trying to make his music seem new so much as we’re trying to draw people to a new way of hearing him … The idea of art is not to stand still, and in no sense will we be standing still, we’ll be trying new things — which includes new things for us because we’re not used to playing outside the concert hall.”

Kloetzel talked about how this all plays to the notion of relevancy, which has become the meme among many classical music administrators these days. “Relevancy is a hard thing to talk to me about because this is my life and basically when you question relevancy, you’re questioning my reason for existence. I wouldn’t trade what I do for the world….

“I think everyone is concerned not only with relevancy these days but also legacy. You think of these great artists who have died recently, Bowie and Prince, and what they brought into the world and what their legacy is. But at the same time, I’m thinking, “yes and we’re still talking about Beethoven 200 years later. So something about him must be relevant. And the truth is that his music has become part of our society.”

“One of the things I’ve noticed when we’re out performing this music, whether in a popup or a concert hall, is that people often have no relationship at all to Beethoven or his music. And of course that’s partly because two generations ago people were listening to this music at home. It was familiar. Now, we see kids who’ve never heard of a string quartet, much less Beethoven.”

The quartet is always receiving letters and one in particular struck Kloetzel. It arrived following a concert in Alaska, written by a woman who while listening began to cry.  “‘I’ve never had an experience like it,’ she wrote, ‘I realized later I was actually grieving for a family member who had died two years earlier. This was just such a cathartic experience and so magical to me.’”

“I love those moments,” Kloetzel finished, and added, “you know everyone is always telling us how we should market ourselves in a certain way. But my sense is, ‘Just listen to the music. It’s the music, and we’re just the vessels through which to share it.”