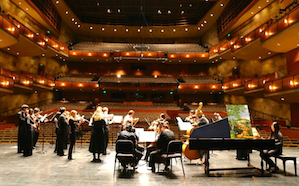 Suzanne Bono, the creator and long-time host of NPR’s Sunday Baroque, once posed the question on her Facebook page, “what makes Baroque Music so appealing to you?” The replies were laconic but to a nonmusician seemed generic, contradictory, and unsatisfying. The music is like ‘beautiful mathematics’ someone said. Or, it was “contrapuntal,” “deep,” “energizing,” or “soothing.” Bono herself suggested that the “unique complexity of a Bach fugue or the driving sixteenth notes of a Vivaldi concerto … seems new, almost foreign.”

As for musicians, she pointed out, clearly it requires a different technique and stamina, and inevitably true practitioners get caught up in the romantic spell of the phrasing, as well as the instruments themselves, the gut strings and tuning to a different pitch frequency.

No matter the reasons, Baroque Music is hotly popular and getting more so. And now the biaennial Berkeley Festival & Exhibition begins on June 1. It lasts one week and on the main stage you’ll hear some of the foremost Baroque ensembles in the world: among others, Ciaramella, playing “alta capella music from the Burgundian Renaissance”; Vox Luminis, the renown Belgian ensemble; The Choir of Trinity Wall Street doing J.S. Bach’s motets; a dozen great individual performers and … the Davis Senior High School Baroque Ensemble.

This is no last-minute, novelty act. The Davis High Baroque Ensemblefirst performed in 2009, under the direction of its founder, Angelo Moreno, and has gone on to become one of the most accomplished young ensembles in the country. Its 34 members, from grades 10 to 12, rehearse daily as part of their class schedules and are a dedicated, ambitious and very talented group. Audition required.

“[It’s] larger than I had ever imagined,” Moreno told us earlier this week in an email, “but as the group's accomplishments grew so did the numbers.”

He went on to recount how an ensemble setting provided students with the ability to focus on Baroque performance practices and techniques. “There is an entire period of music that was inaccessible within the organization of the orchestra program prior to the creation of the ensemble … [which] allows orchestral students the ability to access a rich and diverse wealth of orchestral literature and gives them a unique identity which they enjoy.”

Moreno, 40, is also a conductor with the Sacramento Youth Symphony program. He says his own interest in Baroque music took root despite living in a family with limited musical influence. It was in college, at UC Davis, that Moreno discovered his quest. “I had the great privilege of meeting and studying under Baroque master teacher, violinist, and director Michael Sand and harpsichordist and director Phebe Craig, two of the most influential musicians in my life. Some of my fondest memories in college were playing in the UCD Baroque Ensemble with friends and together exploring this vast and diverse Baroque musical language.

“I remember the first time I was inspired by Michael as a violinist and by the Baroque violin solo music I had heard. I was hit with such a raw attraction to the style and energy of the music. It was at that point that I said to myself, "I really want to do that!".

Moreno, who was named Teacher of the Year in 2005, established the ensemble at a time of budget cuts and layoffs. It took him six years to enroll enough students for his request to be taken seriously. Initially, the course was labeled elitist and for a long time Moreno’s argument fell on deaf ears that the course was part of a well-rounded music education.

He was also faced with finding the money to convert instruments and expand the music library: “Having a strong parent support network and booster organization as well as support from the community of Davis were key aspects of developing this group and allowing for students to rehearse and perform on period style instruments. The third challenge was presenting the group experience to the students so they were excited about wanting to join the group. Having period style instruments and developing authentic Baroque performance traditions gave the group a “cool factor” that has become very attractive for other students looking for a new way to challenge themselves musically.”

The Davis orchestra was unique until 2010, when the curtains went up for the Stevenson Baroque Ensemble, at a senior high school outside Chicago. The group has acquired its own illustrious reputation — it is, apparently, the only high school chapter affiliated with Early Music America — and according to the director, Enrique Valesceo, has acquired a noteworthy collection of Baroque instruments.

Students in the Davis Baroque orchestra play on instruments that have been either fully converted or semi-converted to the style of the period. And so a cello or violin includes a baroque-style bridge, a different tailpiece and chin. All metal and plastic is removed.

“We use all the more natural materials, and we use baroque bows. The issue is largely a matter of money. A full conversion costs about $1,500 per violin, a half-conversion is $400, and you get virtually the same sound.”

“Vilaseco’s instruments are more pure form,” adds Moreno, “and having a Viola de Gamba — and a musician to play it — is certainly very cool.”

Among the musicians in the Davis Baroque orchestra is Alex Asera, a 17-year-old junior who started playing the cello in fourth grade.

“Learning how to play Baroque-style has been like learning another language” she told us earlier this week in an email. “It has the same “letters” as Classical music, but they are arranged and expressed in a completely different way. … I don’t think Baroque music is necessarily better than other types of music, but I do think it is a fascinating glimpse into that specific time in history as well.”

Asera describes herself as quiet but not shy, and a leader, as well as an athlete. Well-rounded in a word. Beyond a typically busy schedule she says perhaps the toughest obstacle she’s faced is “anatomical.”

“Since Baroque cellos have no endpins, we have to hold them between our legs. I’m a short girl, and so this is an extra challenge for me!”

Asera says she is not planning on a career in music but plans to keep playing the cello throughout her life. Her advice to young musicians who might be interested in Baroque music is to explore: “You don’t only have to like or play Baroque music or any one genre— for example, I love heavy metal, too!”

“Learning how to play Baroque-style has been like learning another language.” It has the same “letters” as classical music, but they are arranged and expressed in a completely different way.” — cellist Alex Asera

“Some musicians worry that their classical technique will suffer once they begin learning Baroque technique. I’ve been conscious of this concern, and I haven’t found it to be a problem. If anything, learning how to play Baroque music has actually benefited my modern playing — it has helped me be more aware of my phrasing and articulation. Also, being part of a smaller group has its benefits — each person really matters.

Moreno says, somewhat facetiously, that his success is in large measure his unwillingness to ever be satisfied, and his “want to always think about the next area of musical or professional growth. Some call this my compulsive, professional, mental disease!”

Asked to sum up his interest in Baroque music, Moreno replied, “As a music educator, I always think in terms of my role and responsibility in passing on the tradition to the next generation… Once lost in performance practice, it will cease to be passed on… For me personally, this music has an array of emotions, charm and character, intricacy and complexity that challenges the listener, while still maintaining familiarity and a relatability.”

The Davis Senior High School Baroque Ensemble will play at St. Mark’s Episcopal Churchin Berkeley, on Wednesday, June 4, at 5 p.m., in a concert of Bach, Corelli, and Vivaldi. Tickets are $10/$15; $5 for students under age 30 with ID. Discounts for members of the San Francisco Early Music Society are available. To purchase tickets online visit berkeleyfestival.org, or by phone at (415) 697-1957.