Joan Jeanrenaud, the great cellist and now composer, first began using digital audio programs shortly after leaving the Kronos Quartet 15 years ago. She started with a guitar processor and a looper then eventually graduated to Pro Tools, the digital workstation; and Sibelius, the music notation software. These days, she uses Tools to create, along with pen and paper, and her cello. She uses Sibelius mainly to publish, although sometimes she may compose directly into Sibelius. 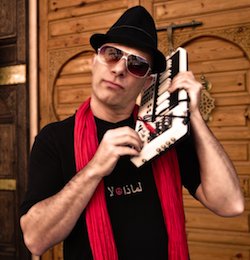 Jeanrenaud, who gave what she insists is her last performance as a musician on January 25, this year, her 58th birthday, is currently composing a score for KT Nelson, artistic director at ODC, as well as a piece for Alice Sheppard, the dancer and choreographer acclaimed for compositions for abled and disabled dancers.

“I’m pretty much self-taught when it comes to composing,” she told us the other day, “and these digital tools have really helped me learn how to do that. For example, I can record an eight-bar figure and then loop it and record something on top of that. It’s also helpful if you do cross rhythms ...”

“But how important is this? Sure, Mozart didn’t need all this stuff. So in that sense I don’t think it’s absolutely essential for a musician, but it is becoming pretty essential for a composer.”

The question remains, as a “serious” musician — or composer — how digitally savvy must you be these days? The answer is something that’s becoming an old truth: In the new world, you have to be entrepreneurial, you have to be your own music producer, publicist, secretary, librarian, manager, software engineer, and nerd. You need to know not only how to make instrument repairs, but you need to realize the potential of your laptop, which has become a recording facility.

For a composer, particularly, knowing the technology has become all-important, if only because with the knowledge comes the challenge to explore the new forms of music that electronics provides.

As you survey composers and musicians the consensus is that, at a minimum, you need to be facile with various software programs. You might begin with Apple’s Logic Pro X, for example. It’s a digital audio workstation and MIDI sequencer application that costs about $200. As you become more adept you might graduate to Pro Tools, for Mac or PC, or the Ableton Suite, the German application that costs about $750. Beyond digital audio platforms, to make a video, certainly if you are a composer, you need to be facile with mixers, keyboards, cameras, lights, and all the wiring that goes with it. 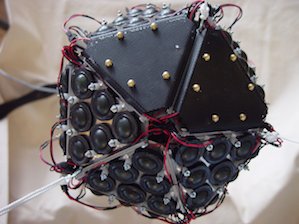 Jef Stott is a composer, producer, and performer, best known for his interest in world music, particularly music from Turkey, Egypt, and Morocco. He is also in the forefront of the International Global Bass Movement. He has just returned from a tour in Japan and has appeared in, among other festivals, Symbiosis Pyramid Eclipse, Harmony Festival, Earthdance, Beloved, Outside Lands, and the Joshua Tree Music Festival.

Stott also teaches a digital production course at SFJazz (digital lab), and has two classes coming up in July. The classes are held in the state-of-the art digital music lab at the SFJazz center, and actually were sold-out before being announced. However, he’s offering more classes in October, for both beginner and intermediate-to-advanced students. Ten students to a class. Three hours a week for three weeks. Courses focus on the three leading digital audio programs: Logic, Pro Tools, and Ableton. The cost is $275. Students in intermediate classes must be familiar with the particular program and should have released some of their own music.

“Now, composers are thinking about new ways to embrace and embody the technology in their work.” — Richard Andrews, associate director, Center for New Music and Audio Technology

He added, “you also have to be able to cultivate your own voice, because in the end your individuality is all that sets you apart. It’s the ‘Age of the Amateur.’ Some kid gets a home studio, releases a track, and it goes viral. Anybody can get on iTunes. So, on the one hand, with this democratization and decentralization, where the whole notion of content has become a gray area — nobody is honoring copyright laws — there’s a lot of amazing work coming out. On the other hand, it’s harder for really valuable work to be heard, and it’s a lot harder to monetize your talent. Back in the day, with record companies, studios, and even The New York Times, they were like quality-control filters, but now we don’t have those.” 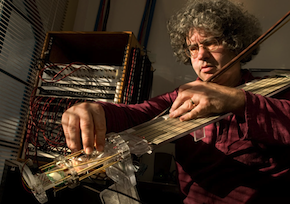 Among the great music labs in this country where one can study this revolution, there is the Center for New Music and Audio Technology (CNMAT) at UC Berkeley. It opened, unofficially, in the 1980s, with a focus on the creative intersection of acoustics and electronics. It offers a variety of programs, including performance, education, and research. The latter is profoundly interdisciplinary and links such disciplines as music, architecture, mathematics, statistics, mechanical and electrical engineering, computer sciences, psychology, physics, space sciences, the Center for New Media, and the Departments of Theater, Dance, and Performance studies.

“The question is, how do we make relevant art from this?” asks Richard Andrews, the center’s associate director. He’s also executive director of the Eco Ensemble, which, incidentally, will be performing at the Venice Biennale on September 20 and 21, 2014. The concert will include works by Frank Bedrossian, Cindy Cox, John MacCallum, Edmund Campion, John Adams, Philippe Leroux, Steve Reich, and Aaron Einbond.

CNMAT is offering one of its signature courses next month, July 21-25. It’s open to people across the spectrum, from no experience (including high school students) to performance artists, dramatists, teachers, musicians, composers, and faculty. The course is immersive, with a lecture in the morning; workshops in the laboratory in the afternoon, and then in the evening a discussion of Max/MSP advanced concepts. The days runs from 10 a.m. to 9 p.m. and includes dinner. The cost is $750. (More information.)

“It used to be,” notes Andrews, “that when people in laboratories were trying to create something useful, all the efforts went toward building some sort of very basic artistic tool. That was decades ago; now, the tools are very sophisticated and there’s a much broader access to hardware and software. Now, composers are thinking about new ways to embrace and embody the technology in their work.

“I think for composers, at whatever stage, this is both knowledge you need and it’s also very exciting.”