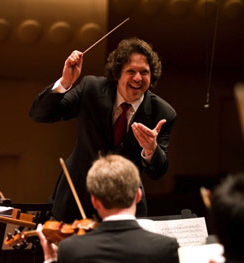 We spoke to the ever-affable Donato Cabrera earlier in the week. He was just coming off a Day of the Dead performance that was not merely a great concert, a combination of classical music and ethnic dance, but also an illustration of his desire to reach out to the community. We began by asking how he’d put together the youth orchestra program, and in particular how he chose Danish composer Carl Nielsen’s Symphony No. 4, ("The Inextinguishable"), written in 1916 against the backdrop of World War I, notably the interminable battle of Verdun.

Cabrera noted that the program was put together last spring, in consultation with conductor Michael Tilson Thomas and several of the youth orchestra coaches.

There are certain challenges that Nielsen poses that are different from any other composer. First of all, his harmonic language is unique. And so you can’t say, ‘well, go listen to Brahms and you’ll get an idea of how to play this. Or listen to Sibelius and you’ll understand Nielsen’s language.’ And then I would say that certain aspects of this symphony are very challenging, particularly the final movement. It’s very songlike and valedictory in its message, but there are certain moments, at the very beginning of that, about two minutes into it, that are very jagged. They’re just hard, for any orchestra. Not just a youth orchestra. But also what this piece does is showcase all the sections. And incidentally the other challenging thing with this is that he required two timpanists, on either side of the stage, they dueling against each other and that’s difficult to coordinate.

Cabrera decided on Copland’s "Four Dance Episodes" from Rodeo because it’s well known to the orchestra and from roughly the same period as Nielsen. It premiered in 1942. It’s also compelling music and part of a tradition that Cabrera feels is important to appreciate.

I always chuckle because if you ask, "Have you ever seen a John Wayne movie?," maybe one or two will raise their hands. Things that are cultural references to you and me, and that you might assume are still cultural references, but they are not. And so I encourage them to go home and watch a John Ford western or see an old episode of The Lone Ranger. I also play them some wonderful footage of the original choreographies and in many ways this populist movement that Copeland’s music is so representative of are the American answer to what the Ballet Russe and Stravinsky and Diagalev were doing in Paris at the beginning of the 20th century — bringing Russian folk dance to the stage. Copland and Agnes de Mille were doing the same thing 20 years later with Appalachian Spring, Rodeo, Billy the Kid, bringing American folk dance to classical ballet.” 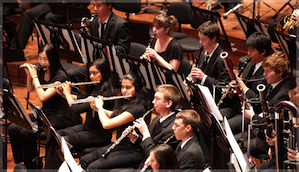 Following Copland, is Ernest Bloch’s Schelomo, written from 1915-1916, and the last of his “Jewish cycle.” The piece will be performed by cellist Oliver Herbert who is not only “fantastically gifted,” but also has a personal connection with the symphony through his father, David Herbert, who was principal timpanist with the San Francisco symphony from 1994 until this last summer when he went on sabbatical to take the same position with the Chicago Symphony Orchestra.

Cabrera has been director of the San Francisco symphony youth orchestra since 2009. We asked his thoughts on the evolution of the orchestra? “Like with any orchestra there’s a shorthand that develops around the sound the conductor is looking for. I talked a lot about that in my first couple of years; now I don’t have to discuss those things as much. Of course, I still do to some extent because there’s about a 30 percent turn over each year as kids age-out, or turn to some other activity.”

At the heart of Cabrera’s shorthand is his notion that to succeed “you must tell the story of the music you’re playing to the audience, and I think we do that and that’s the major evolution.”

And what is the sound Cabrera is looking for?

I am certainly one who likes a deep, dark, rich sound from the strings, and the balance is ‘downward,’ which is to say that the sound of the orchestra comes from within the largest instruments on stage. So when I have the strings playing by themselves, for example, I have often asked the first violins to listen ‘down’ to the second violins and they in turn to listen down to the violas, and the violas to the cellos, and the cellos to the bases, so that the sound is richer one and a darker one rather than a brilliant and bright sound.

We also asked how Cabrera conducts auditions and the qualities he’s most interested in.

What we’re looking for naturally is technical proficiency and a certain level of musicianship, but also people who can respond to teaching. We treat each audition as a mini lesson. It’s not behind a screen; it’s interactive — just because these aren’t fully formed musicians yet and it’s important that we see how they play their instruments so we can get a sense of technical issues or physical issues. But really in this 10-minute window we’re looking to see if we can develop a rapport and see how they respond to suggestions and advice.”