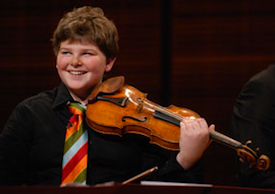 "From The Top" is a decade-old nonprofit in Boston whose productions you may know through the weekly NPR program hosted by Christopher O’Riley. The focus is on young musical talent, for ages from 8 to 18. But this is far more than a showcase. "From the Top" is really a cultural relay station focusing on, among other things, getting musicians to be agents of change in local communities.

Now one of the programs is going to be taped on Thursday, Oct. 25 (rehearsal is the night prior), at Jackson Hall on the UC Davis campus. The sponsor is the Mondavi Center for the Performing Arts at UC Davis. Featured performers include flutist Annie Wu (15) from Pleasanton and Phoebe Pan (14) from Irvine. Other performers have yet to be announced. For tickets and more information, go to mondaviarts.org or call 866-754-2787.

If you are a young musician, or you know one, this is an event well worth attending, if only as a way to inspire budding talent. Highly recommended. Incidentally, Davis is the Winesburg, Ohio of California, sweet, low and hot; a college town but slow moving, not oppressive. And plenty of restaurants.