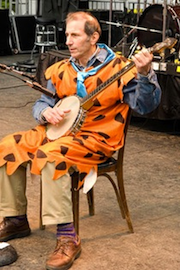 Warren Hellman has passed away, but the torch has been passed: Long live the Hardly Strictly Bluegrass festival. His largesse is legendary and he arranged an endowment to support the festival for 15 years after his death, which was in December 2011. His fortune was largely made as co-founder of a private equity firm. And so now he will be remembered in Hellman Hollow this weekend before such performers as Chuck Mead and His Grassy Knoll Boys, Red Baraat, Lloyd Cole, Patty Griffin, Dwight Yoakam, and the absolutely incomparable Patti Smith.

This is a festival appreciated by both connoisseurs and the merely curious. It is something for the entire family. There are kids everywhere. On a clear day this is a spectacular setting; but even not on a clear day, which quite honestly, it might well not be, even though this is supposed to be an Indian summer in the Outer Sunset District. No matter, this is one of those festivals where everybody’s in a good mood. The music rises to the occasion. It’s hassle-free and pure fun. Highly recommend.