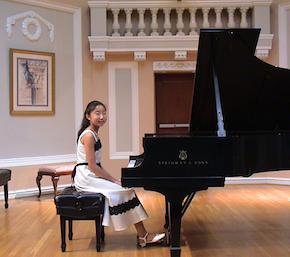 Jady Wei’s favorite piece of music for piano is Prokofiev’s Sonata No. 2, in D Minor; Op. 14, which was written in 1912, in honor of one of Profkoviev’s friends from conservatory, pianist Max Schmidthof, a young man who had committed suicide earlier that year.

She is a distinctly optimistic person but has always been drawn to the mournful quality of this particular piece. Wei, 15, is a sophomore at Monta Vista High School in Santa Clara, and has studied piano for 10 years. She learned Sonata No. 2 from her teacher Hans Boepple, the renowned pianist and long time music professor at Santa Clara University.

“He’s taught me to look deeper at the music,” says Wei, “and at the same time to be part of the music.”

We reached Wei earlier this week, in fact just as she returned from a ceremony honoring her success in The 2013 National French Contest, otherwise known as Le Grand Concours. She placed 9th out of 90,000 participants.

Among other awards, she won an audition at the 58th Junior Bach Festival in 2011; in 2012, at 14. She came in third in the Menuhin-Dowling competition (she played the Bach English Suite in A Minor).

But why such interest in this particular piece of Prokofiev?

“Yes, it is mournful,” said Wei, “and there is a feeling of anxiety, particularly in piu mosso section, but at the same time the piece is also thrilling and invigorating.”

Her interest in music began when she was five; about the time her parent bought a Seiler piano. She sat down at the bench and has never really left.

And so if you had to choose a career today, we asked, what would it be?

“I’d like to be a music therapist,” Wei replied and went on to say that when she plays Prokofiev, for example, she feels very connected to both the music and the world. “I can see how you could use music to help feel better about themselves.”

But as you might suspect with unusually talented young people these days there is more to Wei’s ambition. While she’s going to be taking master classes for three weeks this summer at the California Music Society for Young musicians, and continues to practice two to three hours a day, you can hear the first hint of change, the first allure of the world outside music. At one point in our conversation she mentioned that she’s taking AP Computer Science and AP Chemistry, and that she’s the captain of her school’s mock trial team.

And then that mantra-defense you hear so often even from the most promising music students: “If I went to Law School what would I do with music? I certainly wouldn’t drop it, music is something I will keep doing all my life …”

Have your parents pressured you much one way or another, we asked.

“For me personally my parents don’t pressure me. I know that’s true for other kids, who are pressured to go toward certain careers in the sciences or engineering. But that’s not been my experience. Not at all. At the end of the day I make the decision.”

Wei often begins a sentence by saying, “at the end of the day….”

You think of Joseph Campbell’s urge to ‘follow your bliss’ and everything will fall in order. But then how do you read the likes of Jady Wei? At the end of the day, whenever that is, which will be the real bliss: playing music or perfecting legal arguments or studying signs of chemical life?