Just Being Yourself, at 18

Suzy Lee Weiss is the high school senior from Pittsburgh who wrote a controversial Wall Street Journal opinion piece recently complaining that even with a 4.5 GPA, 2120 SATs, and an internship in a U.S. Senator’s office, she had not been accepted by among others, Princeton, Yale, Harvard, or the University of Pennsylvania. Or Vanderbilt for that matter. Her argument is that the trappings of teenage life these days, along with the murky requirements of political correctness, are far more important for admission to the best schools than academic substance; and the admission director’s homily, just be yourself is, at the least, insincere.

After her satire was mistaken by a few for righteous indignation and brave rebellion, it turned out her lament was partly faux. She wasn’t bitter as the article suggested; her parents were not the tiger-less people she described, and she’s been accepted by the University of Michigan, which is comparable to some Ivies.

In a news cycle of tried news and easy virtue, Weiss was called to the Today Show and played the moment for all it was worth. On the WSJ’s own news channel the interviewer ended the segment saying to Ms. Weiss, “I bet there are a lot of universities out there feeling very, very silly right now for not taking you.”

As though the ‘house of intellect’ is now built simply on attitude. As though moxy is synonymous with character. As though ‘being yourself’ excuses mediocrity or a poor work ethic. As though a one-off appearance on television is a proper substitute for years of work. For real achievement.

Incidentally, Weiss’ rant did not include the unfairness of legacy in gaining college admission. Perhaps she was talked out of that by one of her sisters, a former Wall Street Journal editorial editor.

Mirror, Mirror, on the Wall 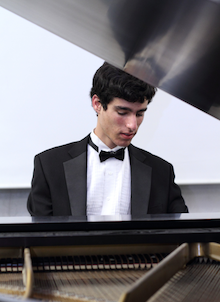 The American world is full of brilliant kids these days, with ever more resplendent resumes. And now that so many students have maxed out their grades, naturally one’s other life is becoming more and more significant. But if Weiss’ anger represents a widely felt injustice that top colleges are looking more at political correctness than real achievement, then perhaps a comparison to the resume of someone, who has been accepted into the top schools is in order.

Consider Joshua Herman, 18, a senior at Monte Vista High School in Danville. He is, in a word, accomplished. He has studied piano for 10 years and completed Panel Level of the Music Teachers’ Association of California Certificate of Merit. He has studied cello for seven years, most recently with Randy Fromme at the San Francisco Conservatory of Music. He was a Young People’s Symphony Orchestra (YPSO) cello intern with the Berkeley Symphony in 2011-2013, and played at its regular concerts under conductor Joana Carneiro. He has won numerous honors, including First Place in the 2008 Contra Costa Sonata Competition. He was a winner of the 2010 YPSO Concerto Competition, and got to perform the first movement of the Grieg Piano Concerto. He is also a tenor in the Chapel College Men and Boys Choir, and has sung for the Monte Vista Chamber Singers and the Contra Costa Children’s Chorus. He has a penchant for musical theater and last summer sang the role of Tony in West Side Story with the Youth Musical Theater Company in Berkeley. He is captain of his high school Public Forum Debate and was the 2013 Poetry Out Loud champion for Contra Costa County. He narrowly missed getting to the state level.

He plays several sports although not competitively, largely because he doesn’t want to jeopardize his music participation. On various days of the week he drives his siblings from place to place, and is ever protective of his time with friends. He also takes advanced classes in Torah studies and, as you would expect, receives top grades in the most difficult courses.

And so on and so forth.

The Loneliness of the Concert Musician

When we talked to Joshua earlier this week, he had just 24 hours to decide which college offer to accept. He’d received nearly a dozen acceptances. His second choices included UC Berkeley, UCLA, Brandeis, Pomona, Tufts and a couple of others.

“I’m still looking at my options,” he said matter-of-factly. Those included going after a dual degree in science and music at Carnegie Mellon; going after a dual degree in any academic subject and cello performance at Oberlin College; going for similar opportunities, although with less intense music programs, at the University of Pennsylvania and finally Brown, whose music program includes an esteemed cello teacher.

Considering his interests you might have assumed Joshua was leaning toward one of the two music schools, but as he went on it became clear he was not. And at the end of 24 hours he would choose Brown.

Nevertheless, the reason he’s letting go his grip on music is telling.

“I don’t know if I ever really saw myself as a concert musician, as a soloist. That’s such a difficult career, not least because it’s so lonely. In freshman year we went on a tour to Alaska. I was very young. I really just wanted to spend time with other kids and enjoy a new place. But there was no time. I’d spent 12 or 13 months learning the Grieg Piano Concerto in A Minor, which I then played in concert. But then it turned out I had to play it again on this tour and work on it for two more months — and perform it in a new hall on a new piano. That really gave me a taste of what that life would be like.”

Later when pressed, he conceded, “As a career I would rather be an economist than a musician.” And he added a little defensively, “I will always keep music in my life but as a hobby.”

Again and again he was clear on that point. “Music is a critical component that I can’t live without.” “Playing music is often when I'm happiest.”

Asked whether he’d reached a stage where he expected to win a competition, he replied, “No, I expect not to win but to grow. And that’s the thing I like about music competitions. It’s hard to practice when you have academic priorities as well; in that sense, the system is not balanced. But for example in the annual sonata competition they gave me the things I would have to prepare for and the moment I committed to that and started playing, I felt happier.”

In effect, competition deadlines force him to put music at the top of his priority list. It’s a psychological trick he plays on himself. To get to the music, and in the very intense way he most enjoys, he enters a contest.

“As for the competition itself,” he says, “winning is worthless; the trophy is worthless. but playing is everything and playing with an orchestra increases that ten fold — because it’s a group. That's really the reward.”

The group that’s meant the most to Herman is the Young People’s Symphony Orchestra, which was founded in Berkeley in 1936 and remains the oldest youth orchestra in California and the second 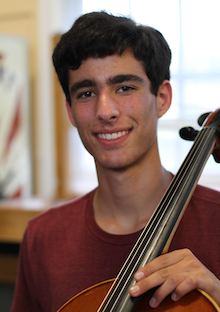 oldest in the nation. It was started by violinist and conductor Jessica Marcelli, who in turn took the advice of Clarabelle Bell, an amateur harpist and Berkeley resident. Bell was forever struck by the sound of a youth orchestra she heard while on a trip to Portland.

Herman joined the orchestra in 2009, in 8th grade, and quickly found that it served as a platform for many of his musical interests. “Not only has it given me friends but something to shoot for and opportunities that probably wouldn’t have come around otherwise.”

YPSO has also provided an example of how people working together, and with passion, can create something larger than themselves. It is a kind ‘idealism-house’, an exercise in group bonding and a refuge from the cutthroat atmosphere of college admission with its relentless zero-sum game.

The atmosphere at YPSO, says Herman, “is very nondconducive to that competitive atmosphere. Of course music can be competitive, and I am myself very competitive, but what binds us together here is not that. It’s actually a very humbling experience playing with these people.”

In an era of “me, my, and mine,” you begin to realize that perhaps the next generation is finding comfort and strength in the group. Which incidentally was very much the message Joshua’s parents have given him. “My family has always stressed using music to make social bonds, not only for personal development but for group bonding. The ultimate achievement is doing something together.”

Beyond family and orchestra, one other place where Joshua has found solace and strength in the group experience, has been in his Jewish studies. “That’s been very fulfilling. The teacher is wonderful and the way he teaches is as important as what he teaches. He encourages people to adopt opinions but you’re not tied to those opinions. He encourages intellectual flexibility, and so there’s debate and dialogue, and it’s all a very open and liberating environment.”

But having said that, even with all the enjoyment and security that playing the cello or the piano, or singing or acting affords; even with bonding experience of the YPSO, and the pleasurable dialectic between being soloist and member of the chorus, the gravity pull to music in not quite enough. The future is just not there. Which is perhaps the sign of an inquisitive mind that needs more space and freedom, a bigger playground. And so you wish the kid luck, but at the same time you wonder how much it would take to hold such a promising musician to his bench.

On May 11, YPSO holds its spring concert. Joshua Herman will play the first movement Rachmaninov’s Piano Concerto No. 2 in C Minor. “I have always been drawn to the first movement,” he says, “beginning with its series of relentless chords gaining power out of a distant silence, and then revealing some of the most exquisitely moving and powerful themes I have ever encountered.” The concert, which also features Beverly Fu playing Aram Khachaturian’s Violin Concerto in D Minor and the Shostakovich Symphony No. 5 in D Minor, begins at 8 p.m. at the First Congregational Church in Berkeley. Admission: $15 general/$12 students and senior citizens. For tickets and more information, call 510-849-YPSO (9776), or go to www.ypsomusic.net.