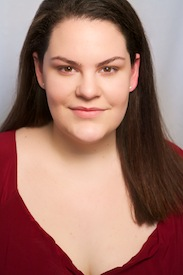 Laura Arthur is a 21-year-old lyric soprano, a budding ingénue who imagines one day becoming a full lyric soprano, perhaps in the steps of the great Italians, Mirella Freni and Renata Scotto.

Arthur recently won the 2013 Marin Music Chest scholarship award, first given out in 1934 to promising young musicians in the county. The award is for $1200. This is the second year in a row she has won.

The award follows a difficult year. Her father died in September; her mother has been hard pressed to find work. Were it not for free room and board at the San Francisco Conservatory of Music, in exchange for being a resident assistant in the dorms, and also working as an assistant receptionist in the conservatory’s student life office, Laura says she might not have been able to make it through college this last year.

Nevertheless, recently, she has found strange solace in arias from Carlisle Floyd’s opera Susannah, which premiered in 1955 and, next to Porgy and Bess, remains one of the most popular American operas. You may remember that Floyd’s version of the story, first told in the Book of Daniel, is a good deal less hopeful than the original. In that, two lecherous elders try to seduce Susannah as she returns from bathing in the river. Unless she surrenders they threaten to testify that they caught her with a lover. She resists and at trial, Daniel arrives in the nick to cry foul. In a scene out of Wallender, he catches the two elders in a lie when, independently, they each claim the scene with Susannah and her lover happened under a different kind of tree.

Carlisle Floyd: "The Trees on the Mountains"

In Floyd’s version, the elders are condensed into Blitch, the hypocritical southern preacher who rapes Susannah, then asks for forgiveness, and is finally killed by her brother. At the climax, in a feminist touch, in Floyd’s Appalachian court-of-last resort, Susannah meets her accusers with a shotgun. They disperse and Susannah is left the existential hero, between ‘Being and Nothingness’ as it were.

“I really connected with the character, and with two of the arias,” says Arthur, “‘Ain’t it a pretty night’ and ‘The trees on the mountains are cold and bare.’ The one is very hopeful; the other is just heart-breaking.

“Since I first really listened to it a little more than a year ago, ‘Mountains’ has become one of my go-to pieces; I sang it as the Redwood Opera Workshop last year and it’s the piece I began my [Music Chest] audition with. Sometimes I’ll find myself singing it; it gets stuck in my head.”

“And yes I do think of my father when I sing it. There isn’t a way to perform anything without having that in the back of your consciousness; it’s always a constant undercurrent. But at the same time it’s a kind of boost because he would be so happy to hear whatever I’m performing. He was always, always encouraging me.”