Let’s say that as an artist you often feel confined, as though in a box; and so how to get out? How to think out of the box, literally? For example, you might feel that no one city gives you enough space and so you live in several. Or, you might feel driven by your father’s idealism — driven is not the right word, but in a way that’s your inheritance, and a kind of box of its own — and so to escape, to find your own idealism, your own identity really, you are forever composing a life of big ideas, even as you realize that the desire to get out of one box becomes another. 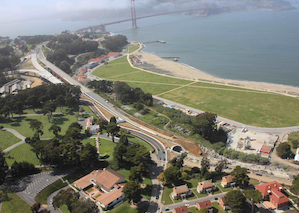 Think of this as a sketch done in lipstick, on an end-of-the-night table cloth, a rough impression of the motivation behind an upcoming music event: Lisa Bielawa’s “Dispersal,” for lack of a better name, which will be performed three times in two days next October 26 and 27 at Crissy Field.

Bielawa is a 44-year-old composer-vocalist, known for her complex arrangements and imaginative musical settings, including the “Encounter” series she has done in several European cities. These serve as prototypes for this current project.

Bielawa still tours as a singer with the Phillip Glass Ensemble and she co-founded the MATA Festival in New York, which celebrates the work of young composers. She is a San Francisco native, went to Lowell High School and on to Yale, and holds a composer’s pedigree from her father, retired San Francisco State music professor Herbert Bielawa.

She is also the new artistic director of the San Francisco Girls Chorus, where she was a member herself nearly 30 years ago. In a recent talk at the school, she noted that, coming from a musical family — her brother is also a composer — the chorus gave her a place to come into her own, musically.

She lives in San Francisco, New York, and lately Berlin, where, on May 1 at the old Tempelhof Air Base, she’s putting on a show, a happening, much like the one planned for Crissy Field. You should note that both events are on what were once military airfields. Although this is more by coincidence than design; that fact gives the project its title Airfield Broadcasts.

When she first described the idea, as we stood outside a rehearsal by a Chinese youth orchestra of 50 strong in Oakland, where she was doing some recruiting, all I could think of was the last scene of Fellini’s 8 ½, with Marcello Mastroianni, the beloved Guido, escaping his own box, dashing around, and under, with his bullhorn, feeling suddenly invigorated to finish his film, or his Jungian self-analysis, as some critics have claimed. 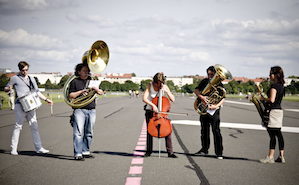 Bielewa’s vision is this: 600 musicians, made up of 12 to 15 groups, including at least two choruses, several bands, and instrument ensembles, each group lead by an embedded professional musician or two, everyone gathered in the center of Crissy Field, which then will include several Mark Di Suvero sculptures. At some prearranged moment these groups will begin to play melodies and phrases written by Bielawa, and then disperse — no chairs, no stands, cheat sheets only — and in the process of stop, play and retreat, each group will move at its own rate, in a kind of big-bang motion, the circle slowly expanding, each group giving and taking cues, the cues spreading from west to east, to catch the wind; each group with just enough separation that they can hear cues but not close enough to drown out neighboring groups.

If it sounds mechanical it isn’t. Groups have choices of what to play. The professional musician-leader within each group will choose one of three phrases, which the group will repeat; the effect will be “like a human megaphone.”

Not mechanical, and yet there is a kind of automated quality to it because the system of cues is based on a series of six algorithms. “The compositional structure,” Bielawa explained, “is game-theory based. Each group will have it own sort of melodic-orchestral signature, and each group is discrete and will play when, and only when, they hear a certain thing happening across the field. There will be a lot of cueing across the space, and as soon as it hears a cue a particular group will play on its own. … Of course, it’s impossible to align rhythmically in that space, especially as the groups, theses blobs, move further and further apart, and as their responsibility to hear each other becomes less and less.”

This will take about an hour; at the end the musicians will drift away and disappear at the perimeter. There will be no amplification. Instruments that carry better than others will be placed strategically. It may be that musicians will wear different colored t-shirts that signify a particular kind of instrument; and so musicians playing strings, from violins to erhus, might all be wearing blue shirts.

It’s all reminiscent of Christo, but instead of cloth the places will be wrapped in swathes of music. As Bielawa puts it, “Yes, it is like Christo, it’s what he might call a ‘gentle disturbance.’”

“No, there’s no abstraction. It just feels right to me and I’m not exactly sure why. But that’s why I became a composer.” - Lisa Bielawa

And like Christo, there’s no message with these panoramas, no metaphor — which would be a box after all — only the sensation born from Bielawa’s curiosity to see how you can expand the dimensions of a public space and the simple pleasure of watching the process as well as its effect.

“No, there’s no abstraction. It just feels right to me and I’m not exactly sure why. But that’s why I became a composer. I tend to find there’s a lot of energy in things that can’t be specifically tied down to a metaphor. Otherwise, I would have gone on in literature, which is what I studied in college. For me, it’s just nice to invite people to experience whatever they feel, and so in that sense this is not message-oriented. My music has always been more an invitation to bring whatever the situation is within the listener to the surface and to have something for the soul to work with. I consider success when people feel that my piece reaches some part of their emotional life.”

Bielawa had come to Oakland see the possibilities of including some Chinese instruments. “I need to learn what these instruments can do if I’m going to use them, and of course one of the challenges is that many Chinese instruments are very soft and there’s no amplification outside. For me it’s also about taking the temperature on different relationships. This isn’t for everybody and I want to be sure that within all these groups people want to have this communal music-making experience.”

San Francisco Classical Voice will provide an online portal by which to experience the concert. As Bielawa points out this is not an effort to represent the event the way you would with an HDTV broadcast of the Metropolitan Opera. “To document this in that way you’d have to create a movie set, but we’re talking about blogging, sound clouding, tweeting as other ways to experience this.”