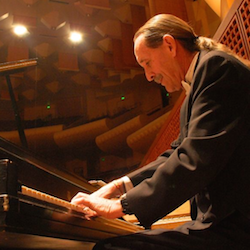 Robin Sutherland never imagined it would turn out this way; after all, he was just a gangly kid from Greely, Colorado — well, there was more to it, of course, but that’s the conceit all these years later — a Frank Capra character, a been-nowhere-know-nothin’-student-from-the-plains, standing alone, in the hallway of the San Francisco Conservatory reading a letter from his mother saying the family dog had died. And just then the Conservatory president himself, Milton Salkind, looked out of his office, his head was all you could see, and he said, ‘hey kid, they need a pianist down at the symphony to play Hindemith's Kammermusik. No. 1. Sutherland looked up. What? he said. The president waved him off. “The soloist is sick, get down there right away.”

That’s roughly the Grove Street legend of how a 6’ 5”, dark-horse, pianist named Robin Sutherland, wearing his “retarded brown suit,” got his first gig at the San Francisco Symphony. Which was a decent regional band in those days, in the fall of 1972. Still, in this case at least, there was no audition, being in the conservatory was enough; the expectation was simply to fill in and ‘play me a river.’ The kid did, and did it well, and the next year somebody named Seiji Ozawa invited him on for real. And now, 42 years later, Sutherland is the senior-most member in what has become one of the hottest bands in the world.

“And by the way, it’s beginning to look like steady work,” Sutherland will say in his dry, ironic way. It’s a well-rehearsed, throwaway line for the press. But at the same time a hint of something else: Steady acceptance is another way of putting it. But what does that mean? And how did the kid from 50 miles northeast of Denver come in from the wild, as he might say, and make it to the big city, and what is it that still binds him to the music? 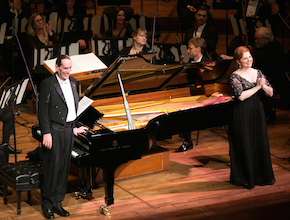 Sutherland stepped into a side room offstage the other day for a phone chat. He’d just finished rehearsing Rachmaninov’s Symphonic Dances, conducted by Stéphane Denève, the French conductor who, a few nights later, would lead the symphony with a lunatic’s energy, his curly red mop flying — and at the end of the Dances, his very last gesture was to mimic the motion of hitting a homerun. An ode to the World Series, perhaps. On the phone, Sutherland was ebullient: “Stéphane gets this music so magnificently and I told him that, not five minutes ago.”

Sutherland went on to explain his own connection to Rachmaninov, and how he grew up musically in “that Russian, pianistic, Moscow Conservatory sort of tradition.” That was the gift of his teacher Rosina Bessie who, along with her husband, Joseph Arkadievich Lhévinne, were renowned pianists of the day, beloved émigrés who made their way from Europe to America after World War I and joined the faculty of what became Juilliard. But the stirring significance for Sutherland was that Lhévinne graduated from the Moscow Imperial Conservatory at the top of a class that included Rachmaninov himself.

And what is it that Denève gets about the music? “Sometimes,” said Sutherland, “you have to pause for a moment on a couple of notes and then you have to hustle up on a couple of other notes [an expressive device called “rubato”]. The trick is to know on which notes to pause.” He went on about how his chamber music teacher, Efrem Zimbalist, the great Russian violinist and long time director of The Curtis Institute, called it ‘poor rhythm.’ “He would say, ‘you can’t have poor rhythm unless you first have really good rhythm.’ And that’s what Denève understands; he totally gets it. … So often it’s in the moments of silence where the music lies.”

“The deal got sealed,” Sutherland explained, “when Rosina and I were sitting, alone, arms around each other, in this dark room, watching the moon landing on July 20, 1969 … She was old as the hills; I was young as nothing.”

“Zimbalist would say, ‘you can’t have poor rhythm unless you first have really good rhythm.’ And that’s what Deneve understands; he totally gets it.” — pianist Robin Sutherland

This was the moment, during the Aspen Music festival that Robin Sutherland, then 17, realized his connection to the piano was bigger than life, and true. Here he was with the incomparable Rosina Lhévinne, at 89, who had married Joseph the year Brahms died, whose composition teacher was César Cui, who had dined with Gorky, Chekhov, and the great Russian bass Feodor Chaliapin; who embodied the age of Romanticism, and the whole ethos of personal expression. Who, at the same time, had sacrificed her own creative life to her husband and, when he lacked the drive to go further, had given him that as well. And here she was with Robin Sutherland, in another century, in somewhere called Colorado, looking at the lunar landing. “I cannot believe I am watching this,” she told him, with her light and melodic Russian accent. “In the first years of my life, I traveled only by sleigh.”

That evening was one great step for Robin Sutherland, who suddenly felt he’d gotten out of a time machine in the 19th century and come upon not only a unique connection to music history and the piano, but also a sense of personal history, which he himself was unsure of. In a cruder sense, he saw an opportunity and took it. “They don’t come any gayer than I do,” he told us, “but I do really well with older women. … I insinuated myself and she took the bait.”

You have to see through Sutherland’s provocations and his irresistible desire to be outrageous, and also you have to remember the attachments that young artists sometimes make. This was not in any way a sexual relationship, but rather one of those odd liaisons with the appearance of romance. His manipulations, such as they were, were driven by the ambition to find a mentor and grand figure, a grand dame, as it turned out, who could place him securely on a path. The truth is that Sutherland was absolutely devoted to Rosina Lhevinne and she rewarded him by taking him on as her student and brought him to Juilliard.

But his moon shot didn’t last long. New York was a disaster. The Upper West Side at 100th and Broadway was not what it is today. He found the city unappealing and uncaring, and Juilliard “a breeding ground for suicide.” His apartment was a solitary and lonely confinement. Then Rosina got sick and had a series of surgeries. Robin was terrified. After a year and a half he fled, partly for reasons that even he didn’t understand. He’d been so close to Rosina, always one of her ‘faves’ is how he remembers it, but her frailty unnerved him. “She looked like she was on her way out and I quietly left.”

She wrote a letter urging him to stay, but it was too late: He was set on San Francisco, if only because it was far away from New York. But then it turned out Rosina was not on her way out and lived another five years. Sutherland had seen a shadow and shied. Looking back, he may have made the right move for the wrong reasons, but that’s not always solace. “If only I’d been more patient,” he sometimes thinks, wondering where other paths might have led, and regretting not having seen the relationship through.

Life Through the Orchestra

“There’s literally no one of stature that I haven’t worked with or played with, or made glorious music with,” Sutherland told us. “In that way, it’s been enormously rewarding. I didn’t see it coming.” He’s been to Moscow and Paris, of course, among so many other cities, and there was the time Beverly Sills told him, “I love your hair, but mine’s better.” Then, in 2011, he met a clarinetist, not in the San Francisco Symphony, who became the "love of his life," and his future partner.

“People don’t seem to think what we do matters anymore and that’s what terrifies me.”

He’s seen all the different regimes in San Francisco: “There was the brilliant tenure of Seiji J Ozawa and then along comes Herbert Blomstedt — how can I put this delicately? — he built the shit out of this orchestra. He made some critical hires. … Followed by Michael Tilson Thomas. And finally, we’ve got it.”

It’s all been a wonderful life, even though the “built-in audience” that once seemed permanent is gone; now, from his perspective it’s the marketers and publicists as much as the musicians that must induce and recruit the audience. “People don’t seem to think what we do matters anymore and that’s what terrifies me.”

“I can’t wait to do the Symphonic Dances tonight,” he said a few minutes later and with genuine enthusiasm, “because, as Jessye Norman says, ‘that’s where I live.’”

He went on to describe the place where he lives, in the harpsichord cadenza in the first movement of the Brandenburg Concerto No. 5, for example.

“You start off and then all of a sudden the orchestra stops and the harpsichord continues on, alone. It’s as though you’re cast adrift, so alone, and yet so conjoined to your fellows, and when they join up with you again, it’s one of the most intense feelings I can name. It’s like a lighthouse and you see it and you come home and all your peeps are there waiting for you. There’s just nothing like that; nothing, nothing in the world. To me, that says everything we need to know about humanity, to be recognized and to be cleansed and to be safe. What else on earth is there? That’s what we yearn for. It’s all settled in that one moment.”

“I’m an adopted child and all I ever wanted in life was to come in from the cold and when that can happen musically … that’s when I’m the most content.”

The conversation lost momentum. There was a long silence and Sutherland added, “I’m an adopted child and all I ever wanted in life was to come in from the cold and when that can happen musically, as it does very frequently, that’s when I’m the most content.”

A few nights later we went to Davies Symphony Hall, and there was Sutherland up on his hill as it were, almost above the conductor, Robin’s head bobbing to the rhythms, the angular-faced cowboy, with ponytail, riding his Rachmaninov. And at the same time, a Malkovich character, countercultural, an odd lord of the manor, sweet and difficult, and purely San Francisco.