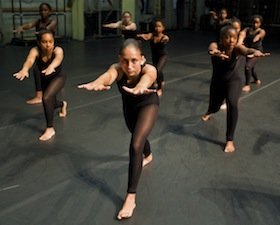 Jazz class at the Berkeley/Oakland AileyCamp at Cal Performances: 12 children standing in rows. ’Tweens and barely teens. Three boys in front, two rows of girls behind. Roughly at attention. It was midafternoon in early July, on the vast stage of Zellerbach Hall on the UC Berkeley campus. One of the boys yawned.

“You yawn again,” said the instructor, “and the entire group does 50 jumping jacks.”

Later, in one of the routines, two girls caught your eye. They were jazzing across the stage, practicing a phrase, a “grapevine,” with a direction change. The girls were tall and lithe, elegant in their way, chins up, moving together, but not exactly together, they didn’t have to, that wasn’t the point, they were just on their own but aware of each other, clearly friends, stepping carefully yet casually, like two actors practicing carelessness.

It brought to mind a scene in James Baldwin’s novel Another Country — Lenox Avenue, in the late 1950s. He’s describing the indifference that had taken over Harlem neighborhoods just then. “The beautiful children in the street, black-blue, brown and copper, all with a gray ash on their faces and legs from the cold wind, like the faint coating of frost on a window or a flower, didn’t seem to care, that no one saw their beauty.”

Baldwin (a favorite writer of Alvin Ailey, by the way) inadvertently calls up a truth about the Ailey dance camps. Kids come in the door. They’re from all over the map of worldly experience. Someone — one of the instructors, maybe, or one of the other dancers — sees their beauty, and then all of a sudden, or after weeks, the child see it in himself or herself. And when that happens, it’s a great thing.

The first Ailey Camp opened 23 years ago. There are now 10 camps across the country: two in Kansas City, and the newest in Newark. Houston, Detroit, and St. Louis are on tap. Each camp finds support through local foundations or city agencies. It takes about three years and $200,000 to set one up.

Someone sees their beauty, and then all of a sudden, or after weeks, the child see it in himself or herself.This summer, throughout the country, there are about 1,000 students enrolled, all told. The numbers are going up, from roughly 80 to 100 at most camps.

Not, however, at Berkeley, where you’ll find 56 campers, down from 80 two years ago. The main reason for the contraction is the cost of food. These camps supply everything for free: uniforms, instruction, transportation, and two meals a day. In Berkeley, it costs $40,000 to provide two meals a day for six weeks, for 56 children. 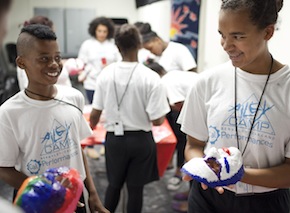 Why supply food? you might ask. Couldn’t they bring their own? Some could. But many don’t get two scheduled meals a day. A mother is working; a father is missing. Grandmother is in the hospital. Support is catch as catch can. And then things may not be going well at school. Or in the neighborhood. There’s often a culture of violence, as you might expect, and a teen culture of disrespect and foreboding.

“It’s a mix of children,” notes Mares Myerson, a long-time funder of the program, and also one of the people who interviews children before they are accepted. “Some are interested in dance. Some are told by the principal that they need to come to camp to go on to the next grade. Some are just falling through the cracks. And so that’s part of our goal: to provide some basic skills, as well as self-confidence, at a crucial moment."

Learning That He Mattered

“You’ve changed in so many ways ... all this struggling to find self-respect, and then the curtain goes up. The lightbulb goes on.” – Yejide Najee-UllahWho better understood these problems than the late Alvin Ailey himself? He was born to a 17-year-old mother, in a nothin’ town of about a thousand, in Rogers, Texas. His father left when Alvin was 6 months old. His mother was 22 when she was raped by a group of white men. Eventually, the family moved to Southern California where Alvin went to middle and high school.

About his life in Texas, the noted dancer and choreographer once told an interviewer, “There was the white school up on the hill, and the black Baptist church, and the segregated theaters and neighborhoods. Like most of my generation, I grew up feeling like an outsider, like someone who didn’t matter.” 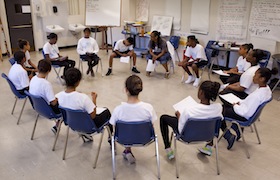 Which is why he would later become such an advocate for reaching out to at-risk communities. It was a kind of promise he asked of his dancers: to take their talent and success and grow it in some other place.

David McCauley, the dance camp director from the beginning 10 years ago, danced with the Alvin Ailey American Dance Theater for 15 years. He tells this anecdote of working with Ailey himself:

He would always find something good to say. I remember once when I was in the junior company — this was in about 1978; Alvin was in his late 40s. I was dancing with Pearl Primus. We were doing a piece called Hard Times Blues. It was a really intense piece and at one point you’re crouched down on your haunches and hands and then you fling yourself up into the air, and you shake and you writhe, and then sink down again into this crouch. So I was doing that and all of a sudden I found myself down on the floor, in fourth position, but with one leg going one way the other leg going another way and looking right into row A.

It felt like it was forever and I felt awful because I had made this huge mistake in this gala performance, and my first thought was, Alvin will never talk to me again.

After the performance I was standing around, wanting to be part of the wall, and Alvin came up to me. He could see I was upset and asked what was wrong. I said, ‘I’m so sorry I messed up.’ He said, ‘But it was magnificent. You popped up into the air from fourth position, it was fantastic. It was great. Don’t worry about it; whatever mistake you made, no one saw it.’ As demanding as he was, he would always find the positive. He could transform the moment. 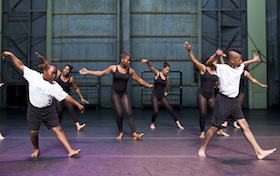 This is how Shawn Nealy transforms the moment onstage in Zellerbach Hall, where she is the Personal Development instructor (she’s a percussionist by trade):

I remember one camper. From the day she arrived, her demeanor was very closed and shut down. At 14, she was the oldest in her group. Depending on how her energy was on a particular day, she had a huge impact on the rest of the campers. The problem was that often they didn’t know how to navigate being around her. Some even wanted to leave the class because of her.

I also want to give them a place to cry. And here was this young girl who was holding onto so much in her body because of where she lived — in East Oakland. She’d experienced a lot of gang violence, and so had a lot of emotional armor. In addition, her mother had told her that it’s a sign of weakness to cry.

It was probably the third week of camp and one day she seemed particularly unhappy and the group reflected that. I completely scratched my agenda for the day and drew them into a circle. I asked what was going on and went on to stress that this is a place where you can be honest and no one is going to judge you for what you say.

Everyone was silent and I said, ‘OK, that’s fine, let’s just take that in.’ Finally, somebody started to speak and then someone else and someone else…. But this one girl remained quiet and really, really tight. So I stood behind her and put my hands on her shoulders. I said, ‘You’re in a safe place, it’s OK to cry, just let it go.’ She held on for a couple more minutes and then the tears started to fall and she just cried and cried and cried and cried. And once she started, others started crying too.

So finally the group got to see this other part of her and people felt so relieved. For her, for themselves. From then on she was completely different.

Driven by Commitment and Fun

Yejide Najee-Ullah was 14 when she came to the Berkeley camp in 2002. Her mother signed her up. She, herself, had no interest, and the first few days didn’t go well. She didn’t make any friends, She found the discipline oppressive. She didn’t understand the significance of "leaning into the discomfort." She didn’t see the point of making masks or keeping a journal. 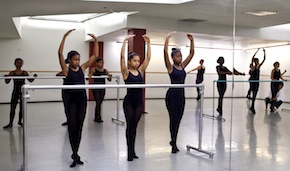 Frankly, she also may not have imagined herself "at risk."

Moreover, the endless dancing and all the obsession with precision was tiring. You have consecutive one-hour classes in ballet, Horton-based modern dance, jazz, and West African dance. And then there are classes in creative communications and personal development, which in turn explore conflict resolution, drug abuse, decision-making, and goal-setting. It was all interesting and off-putting at the same time.

Later, Najee-Ullah would go on to study anthropology at Smith College and join a marketing company in Boston. But each summer she returns to Berkeley to her role as a group leader. She’s now 23. What drives her commitment is the fun of dancing; the satisfaction of working with these children; and also the performance at the end of each year’s camp. This year it will be on August 4th, a 90-minute free performance entitled, appropriately, Transitions.

“That’s the one moment every year that means so much,” says Najee-Ullah. “That exact moment before the curtain rises.”

In the exact moment there’s almost complete silence. Although here and there dancers are freaking out. Their hearts are coming up their throats. Even Yejide is caught up in it. Even after all these years.

But for you, at 11 or 12, or whatever you are, the tension is nearly exquisite and you'll remember nearly all your life. Here you've done all this work and struggled and you’ve changed in so many ways, although it’s not clear in your mind exactly how, but you do feel something different — confidence, call it — and people telling you, ‘you’re a diamond, you are’, and ‘you’re worthy of doing some great thing, just go and do it,’ and ‘if only there was an SAT for dance, for drawing, for creativity itself, you’d be at the top, but you’ll get there anyway,’ and then suddenly the curtain goes up.

The light shines on your face, and now everything is loud and fast, but in that exact second, you turn into something else, and whatever it is you find you are ready and it all works.