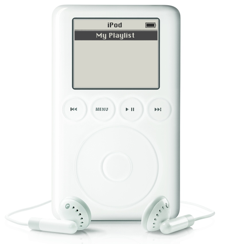 The iPod (and, by extension, iTunes) not only revolutionized the world’s listening habits early in the last decade, expanding the sheer variety of music people listen to; it also changed the manner in which people think of and hear music. It’s true that not everyone has an iPod (or an iPhone or an MP3 player of some sort), but virtually everyone understands its significance. The device holds music that fits in your pocket, offering you an easy way to listen to vastly different things, even a way to juxtapose and to mash-up music or sounds that would normally seem as far apart as a Formula One racecar and a pony.

The most significant musical inventions from Apple’s iPod (and, by extension, iTunes) are the shuffle, the mashup, and the playlist.

The shuffle feature is fairly obvious. It randomizes which tracks will be played from your device. I’m almost certain that, when it was created, it was not intended to be revolutionary; rather, it was a simple means to create variety. But oh, such variety! Suddenly, people who engaged with myriad forms of music, who loved jazz and country, classical and rock, were hearing these pieces back to back. Within a few hours after they loaded the device, all the music they owned was in a single place, rather than scattered around the house on various systems. It’s true that, in olden days, we had multidisc CD changers (though I’ve never seen one — man, I’m young ...), but even those held 10 CDs at most. The smallest MP3 players today can hold considerably more than that, and my computer (not including the external hard drive) has 56 full days of music on it, in case I’m ever stranded on a desert island with nothing to do. All music has taken on the label of “music from my iPod,” where anything goes. People even move music to their iPod that they are embarrassed by or don’t like. Now, that’s weird.

What happened when music began to be played this way? Well, overnight, people started hearing similarities between odd things. Composers who drew their influences from Perotin and Stevie Wonder and traditional Indian ragas were heard to apparently have things in common. These elements come up in a random shuffle, and hearing them juxtaposed became commonplace. So these days, composers who are tuned in to such devices and aren’t technophobes can continue to draw inspiration from all over the map and across time.

With composers and listeners picking up whatever they want and playing it all together, instead of serially, genre became much less important. Sure, there are still opera fans and bluegrass fans and jazz fans. But, to my generation of listeners, the distinctions that matter lie in content: How does the music speak to you? Identifying that feeling can lead people to look for connections across boundaries, then to mashing genres together.

A mashup, like it sounds, is the juxtaposition of pieces based on a common factor. A simple example would be if you typed the word adagio into your search engine and then listened to works by Bach, Barber, Bartók, Beethoven, Berg, Bogdanovic, Brahms, and Britten (the composers in my iTunes, or rather the first eight alphabetically, to have written adagios). The adagio keyword creates some pretty straightforward connections, because it only invokes a slow tempo or a form of movement in classical music. But if you searched for a word such as light, then things will turn even more bizarre and interesting. I suggest you play around with the search engine, also typing portions of words (a search for ada... can turn up hits for adagio, adagietto, Adam [composers Adolphe and John]). (Astute SFCV readers can make use of its extensive online glossary, under the main “Music Resources” tab.)

I recall a time in high school when I went to a movie theater in San Francisco to see a James Bond flick. Instead of the usual advertisements beforehand, they had the screen covered, and music was playing through the speakers: Pablo Casals’ recording of Bach’s first cello suite. At first I thought this was really nice and pleasant, and I happily sat through the end of the suite. After it was over, the next piece on was the Yo Yo Ma recording of the same cello suite. Now, I love the cello suites as much as anyone else, but it seemed odd to me that they would play two different recordings of the same cello suite back to back. What was going on in that booth? Then it suddenly struck me — no one engineered this; someone probably typed into their search engine “007” (thinking about the code name for James Bond) and received the slightly esoteric Bach cello suite whose catalogue number is “1007.”

What a world of discoveries iTunes has made possible.

The other most significant recent invention in the field of recorded music is closely linked to the shuffle and mashup features: the playlist. This has led to interesting developments. First, a lot of people my age couldn’t care less about the album. I myself don’t give a fig that you were clever enough to pair Adams and Ziporyn; to my way of thinking, the Adams piece still goes under “A,” and the Ziporyn under “Z.” The thought and care you may have given to the program of your CD yields to my reinvented order.

We can, in essence, create our own “albums” (playlists) that have nothing to do with who’s playing (as most albums do). We can combine things by whatever criteria we choose, like “pieces with ‘Rain’ in the title” or “pieces that last 4 minutes and 33 seconds” or “all the pieces that influenced John Adams’ Dharma at Big Sur. (Yes, I have all these playlists on my computer.)

To me, this is an incredibly exciting feature. Every time I sit down to start composing a new piece of music, I create a playlist. I recently wrote a woodwind quintet, so I prepared a playlist of all the woodwind quintets I had or could find. Last year, I was writing a piece and having difficulty with the slow ending, so I made a playlist of every piece that has a slow ending, then slowly weeded out the pieces I felt were less applicable to my scenario. (With digitally stored music, you can continually edit playlists without harming the originals — how cool is that?)

So thank you, Mac, and thank you, Apple Inc., for revolutionizing the way we listen to and appreciate music. While I do get nostalgic sometimes and crank up my old CD player and plop a CD in, it never lasts long, and I end up plugging my iPod into the speakers less than an hour later.

To relive my experiences with mashup and shuffle and playlist, I created a playlist of the first 15 pieces that showed up on my random shuffle. I then listened to them every day for a week. Here are the pieces for your enjoyment.

1. The Beatles, I Feel Fine

I fell in love with the Beatles from my parents, children of the ’60s. “I Feel Fine” happens to be one of my favorite songs, primarily because of the use of feedback at the beginning.

This turns out to be the Andrew Manze recording, which I adore. His use of ornamentation is elegant and smooth.

I don’t honestly remember why Haydn’s 44th is on my computer, but now I’m really glad to have it. Deleting music from my computer is avoided at all costs, as I come back to it again and rediscover an affection for it, even if I don’t know why.

Many years ago, the San Francisco Symphony performed the massive Britten War Requiem, and it was one of the truly great artistic experiences of my life. I immediately put the recording into my computer.

Bogdanovic is one of the world’s most underrated composers, and also a great performer and improviser. A guitarist who taught for a long while at the San Francisco Conservatory of Music, he famously mixes complicated meters in a way that makes them elegant and pleasing to listen to.

The master of the tango, Piazzolla just got better throughout his life. My favorite albums are his final three: The Rough Dancer on the Cyclical Night, La Camorra, and Tango: Zero Hour. My cut is from La Camorra, since it embodies passion.

I put this one on my computer when I was contemplating joining a ska band in high school. The Planet Smashers still hold some retro charm for me. This is music for a (slightly) younger me.

It seems I have no fewer than seven recordings of Bach’s G-Minor Sonata. The one that came up was by Max Zuckerman.

A flamenco-method book that my father purchased came with a CD that included this piece. I don’t think I’d ever listened to it before this shuffle. It’s a fun piece that makes me want to go find that book and see what I can learn from it.

I’m honestly shocked that so little “modern classical music” ended up on this playlist, as it’s what I listen to more than anything else. Takemitsu is one of the greats, and I’m particularly a fan of his, because his music rarely (if ever) sounds Eurocentric, though it still recognizes what’s going on in Europe. I worry that composers frequently are either too inspired by that continent’s culture, or too awed to avoid it. Takemitsu walks that middle ground nicely.

11. François Couperin, L’Apotheose de Lully, one of the later movements

I teach a music history course at a local high school. My students never leave the course without having listened to some of this masterpiece. It’s an underrepresented classic.

I have no idea why “Bright Eyes” is on my computer, or why I put it there. I don’t even know that much about the music, but I do like the several albums of Big Picture I have there. This work comes from the album Lifted, or The Story Is in the Soil, Keep Your Ear to the Ground (2002).

Perotin is a composer of the medieval period whose music shows up from time to time. He was writing circa C.E. 1200 and I first became interested in him because of Steve Reich (who cites Perotin as one of his major influences) and the Kronos Quartet (which released a CD called Early Music pairing Perotin and others like him with modern composers like Alfred Schnittke and Arvo Pärt).

Considered by a former teacher of mine to be the greatest work of all time, Wozzeck is an opera that shows the horrors of a life falling into despair and depression. Rarely does music get inside the head of an operatic character as effectively as it has done here.

A traditional Irish folk song, this is an arrangement for solo guitar written for students. I use it primarily for educational purposes, yet it’s a gorgeous piece.

Certainly among the top two arrangements of The Star Spangled Banner of all time (the other being, of course, by Jimi Hendrix), this recording is from the London Symphony Orchestra and Michael Tilson Thomas’ Stravinsky in America CD, which is wonderful.