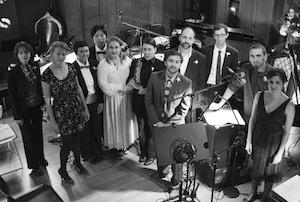 It’s spring, and the annual Switchboard Music Festival is upon us. The festival is now in its fifth year, and is celebrating in style. Switchboard has specialized in bringing together artists who are challenging, blending, and breaking down traditional genre distinctions. The three directors of Switchboard, Jeff Anderle, Ryan Brown, and Jonathan Russell (all alumni of the San Francisco Conservatory of Music, where they met), each push genre boundaries in their own way, and feel that this realm is where the most exciting music is being created today.

To date, Switchboard’s previous four marathon concerts have showcased some fantastic groups and artists, from Edmund Welles (a bass clarinet quartet specializing in “Heavy Chamber Music”), Melody of China (a group known for its traditional Chinese instruments), The Japonize Elephants (hardcore-Gypsy-circus-klezmer-pirate-clown-madness for everyone), miRthkon (a group delivering “sonic blasphemy,” as they call it), and the awesome Weiner Kids. The results: people approaching music, from vastly different perspectives, all in one festival.

This year, all sorts of exciting groups and ensembles will be playing. Director Russell mentions being particularly eager to hear Dominique Leone’s dramatic reimagination of Igor Stravinsky’s Les Noces. It will be staged, use costumes, and incorporate screen projections. Leone is a musician with an enormous range of influences, from the vernacular to the avant-garde. His take on Stravinsky should be shocking and unique.

Leone has worked with Lindstrom, Mungolian JetSet, Kevin Blechdom, William Winant, MaryClare Brzytwa, Odawas, R. Stevie Moore, Wobbly, and others. If you recognize even two names on that list, than you have some understanding of the sheer variety of interests that Leone will bring to this Stravinsky.

Ryan Brown mentions that he is incredibly excited (choosing tactfully to not mention his own composition, with the SFCM guitar ensemble playing Banksy, a work inspired by the street artist of the same name) about George Hurd and the Hurd ensemble. Hurd’s music organically blends classical-style composition with the timbres and grooves of rock, jazz, and world music. It’s a natural, clearly articulated sound that encapsulates the “in-between genres” zone that Switchboard seeks to explore.

I’m especially curious to hear Faun Fables, which was described to me as being “hobbit metal.” I’m also looking forward to hearing The Living Earth Show, which has consistently been programming awesome and adventurous music and performing it at a phenomenally high level. It’s probably one of the more creative ensembles in terms of self-promotion, as well (see its recent Kickstarter campaign). Honestly? I think almost everything on this coming fifth-anniversary Switchboard Music Festival is going to be hugely entertaining. For more information, check out www.switchboardmusic.com.