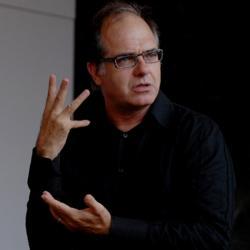 Steve Schick and the San Francisco Contemporary Music Players have hit another home run of a concert. Sure, some of its music Monday at Herbst Theatre may not have been to everyone’s taste (particularly the new music), but that doesn’t matter in the least. Every piece was sharing a different worldview, and every piece engaged with the audience in its own way.

My personal favorite on the concert was probably the most “in-crowd” work I’ve heard in a while. Mark Appelbaum’s Pre-Composition is a work that’s painfully funny and that hits close to home for a composer or a musician who’s suffered working with one. It was less “composed” and more scripted for eight loudspeakers, each projecting Appelbaum’s own voice, all having a conversation about the piece they’re writing (which the audience is listening to). They spout ideas, both good and bad, try things out vocally (humming, glissandos, chirping), have meaningful conversations and pointless ones, argue, and so on. (The inner voices in my own head sometimes sound much like that.)

Another favorite of mine was Nathan Davis’ Bright and Hollow Sky. Davis, who has worked closely with I.C.E., presents both jarring and tense soundscapes that evolve slowly over the course of the piece. One note would sound clearly in the flute, and then you’d realize that it’s intentionally out of tune, before the trumpet joins in on the “correct” note, and the clarinet spouts a multiphonic with the same pitch. The gradually growing structure reminded me of a glacier, slowly moving and, in many ways, causing fear, yet leaving rejuvenation in its wake.

Aaron Gervais’ Culture No. 1 didn’t leave me with such a sense of grandeur. The premise of this work alternated samples left over from other pieces of his with piano and harp music musing on the samples. It didn’t feel connected enough, musically, to the samples. I wonder about his process of pitch selection, as it hovered (for me, ineffectually, though hovering can be amazing) between tonality and atonality. It didn’t seem to go far enough. Still, it was played expertly by Karen Gottlieb and Karen Rosenak.

Lou Harrison is among my favorite composers, and his presence is always a welcome addition to any program. His Serenade for guitar is a personal favorite of mine (and in fact a piece I’ve performed a number of times). That being said, it seemed that David Tanenbaum wasn’t playing up to his usual standard. Despite not having his most successful night technically, he was nevertheless able to convey the absolute openness of Harrison’s expressive language.

Campion combines visual components on stage with resonant and haunting music, the archaic with the avant-garde, the beautiful with the horrifying.

The final piece on the concert, and brilliant throughout, was an SFCMP-commissioned premiere by Edmund Campion. Campion is a composer that I always forget about until his music is in front of me, and then I remember how much I love it. He combines visual components on stage with resonant and haunting music, the archaic with the avant-garde, the beautiful with the horrifying, and all done in an incredibly compelling manner. His new work, Small Wonder (The Butterfly Effect, was no exception. The stage was set up to look like a metaphorical butterfly, with a bassist and the conductor functioning as the thorax, and the wings made by a percussionist, clarinetist, and violinist each. As the piece began, the “butterfly” began to metaphorically flap its wings, sounds fluttering across the stage, first from one wing, then from the other, then back, creating a live stereo effect. The harmonies opened up and the butterfly began its figurative flight. The bass player, Richard Worn, played his astonishing part with both passion and poise.

I regret that this time around I wasn’t able to attend the Contemporary Insights session, held Sunday. This is a project in which the players and composers participate in an open discussion of a particular piece a day before its performance. This time, the work under discussion was the Campion, and I wish I had been there, since the Contemporary Insights program is one of the most consistently engaging chances to hear the thoughts of musicians, programmers, and composers on the work they do.