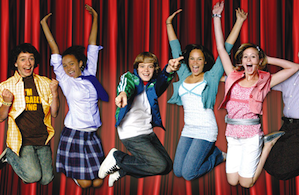 Among the opportunities for children interested in musical theater is Children’s Musical Theater (CMT), a nonprofit now celebrating its 45th anniversary. It was started by a 17-year-old performer named John Healy, Jr., in 1968. The company, which focuses on kids between 8 and 19, has been under the artistic direction of Kevin Hauge since 1996 and has become known for its audition policy of not turning away any performer. Such was the dream of John Healy, who passed away a few years ago.

In November, the company is putting on Barnum (with a cast ages 8 to 15) and Les Misérables (ages 8 and above). CMT shows often include two casts, each with as many as 60 performers. In the past the company has produced everything from Annie to High School Musical.

Is there a difference in the casts? We asked Hauge: “No. If you mean in terms of acting ability, no. If there was ever a method to my madness, I would say I have a tall cast and a short cast.”

The spring 2013 schedule includes four musicals with children ages 8 to 14: Godspell (February); Aladdin (March); Music Man (May) and Heidi (May). For older kids, ages 14 to 20: In the Heights (February), Phantom (March), and Jesus Christ Superstar (May). Auditions and workshops will start in early January. The workshops cost $190; however, there is financial aid and Hauge insists no one has ever been turned away over tuition.

“We’ve been recognized by the NEA” Hauge says, “not because we’re a children’s’ theater company, or even because we’re so inclusive, but because of the excellent quality you see in our performances. And because we’re the only one of its kind for children. Our methods focus on breaking a show apart and making sure we’re creating moments where everyone participates, from young people who have some experience to those who have never been on stage before, and then putting it all together in a seamless performance.”

CMT also offers Master Audition classes in which you spend an afternoon with guest and resident teaching artists and directors. The focus is on process: “How to perfect an audition song, how to make the most of a cold reading and how to stand out during a dance audition.” Cost is $95 per class, which are held prior to auditions for CMT productions.