It is the Year of the Snake, sometimes called the Year of the Little Dragon; the year for people who are intuitive and graceful, and both cunning and wise. New Year’s day is February 10. “Of course the new year is always associated with luck,” Chunming Mo told us. She’s been a violinist with the San Francisco Symphony for more than 20 years, and is originally from Shanghai. “If this is your year, it’s always good to be a little more careful. Some people wear gold or jade. Some people wear red as a way to protect themselves. Rice cakes are also good luck.”

With that in mind we offer a taste of various celebrations. Chunming, of course will be part of the concert and celebration at the San Francisco Symphony, featuring erhu player George Gao and a reception with Chinese dancers, calligraphers, children’s activities, and more.

But if you can’t get there and wish to get a refined sense of the syncretism of Chinese music and Western Classical music, consider the second annual Lunar New Year Celebration Concert presented by the El Camino Youth Symphony at the Flint Center in Cupertino on Feb. 2.

The performance, which naturally begins with a dragon dance, will feature the Senior Symphony and Sinfonietta Orchestras, as well as Concert Competition winners Byron Fan (violin), Sophia Lo (marimba), and Mindy Cheng (piano). 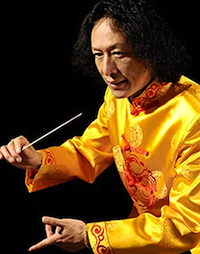 Fan, 17, a junior at Saratoga High School, will play in the highlight of the concert, Chen Gang and He Zhanhao’s Butterfly Lovers Concerto. This piece was commissioned in 1954 to celebrate the tenth anniversary of the People’s Republic of China and was composed by a violinist and a professor of music. The concerto was written for Western instruments, including the violin, which was, in part, perhaps a sign to Soviet allies that China was refined as well as progressive.

The story, based on a legend from the Tang Dynasty, is reminiscent of Romeo and Juliet. It has been made into an opera and a series of films. The story is this: Zhu, Yintai, a girl from a wealthy family is sent away to school. Because girls are not allowed to attend school she casts herself as a boy and meets Ling Shanbo. Eventually the ruse is uncovered; the two fall in love but are faced with the displeasure of Zhu’s parents who arrange for her to marry someone else. Ling becomes ill and dies of a broken heart. On the day of her wedding Zhu’s procession passes the gravesite of Ling, and just at that moment, a miraculous thunderstorm. Lightening strikes Ling’s tomb, which opens, and Zhu jumps in. A metamorphosis occurs: Two butterflies flutter out of the tomb.

Fan has been preparing in earnest to play the piece since September and has clearly fallen in love with both the story and the process of eliciting the various emotions. “It’s really a lot of fun because you feel like you’re telling the story as you play. And at points the color of the music changes; there are a lot of runs and chords when she’s angry at her parents. And then, toward the end the solo violin is muted to represent the spirits in their new form and that leads back into the melody, which is very simple but very beautiful.”

While the Butterfly Lovers Concerto may be the highlight of the concert Gordon Lee will also conduct his signature piece, Young Impressions of the Old City. Lee, 60, founded the Firebird Youth Chinese Orchestra in 2000 as a way to spread Chinese culture and the country’s musical heritage to new generations of Chinese Americans. Programs allow kids from 7 to 18 to play folksongs, folk music, and musical storytelling, and there is a steady concert calendar.

We reached Lee to talk about his piece, but also his view of the syncretism of Chinese and Western music. He pointed out that Western classical music, both the music itself and instruments, were greatly influenced by the Industrial Revolution; whereas Chinese music and instruments grew out of an agricultural economy, in effect folk traditions in which “millions and millions” of songs are passed down through the generations, and gradually changed. Authorship is unknown and unexpected. In that sense Chinese music is much more open to collaboration, and perhaps innovation.

“Chinese music hangs in the air, like a cloud,” said. Lee. “It has no attachment to a place or a person.”

Chinese music also includes that body of songs taken from the countryside, which became the jealously guarded property of the empire. “Even if you were a lower ranking official in the emperor’s court,” said Mr. Lee, “if you gave the music away you might be killed.” While much of that particular music has disappeared, it remains embedded in the folk traditions

Young Impressions of the Old City, written in 2009, was performed to mixed reviews initially but has since evolved and attracted much more positive attention. The piece describes three scenes from Lee’s life growing up in Beijing. One scene captures one of the nine gates around the Old City, Anding Men. A second scene is a reminiscence of the alleyways in the old city, which provided both short cuts and exotic boyhood destinations. A third scene evokes the dangerous thrill of climbing the city walls, 20 meter high with holes here and there large enough for a single singer, and so you imagine the boy rock climbing up these walls, and often falling off.

“I think one should come away from listening to this piece with the thought that this reflects a great culture with a great history. You should always feel the nervous energy, along with the fun and excitement of youth.”