The holidays are about personal and professional traditions, as well as seasonal ones. And so we asked around to find out how some in the SFCV community celebrate this time of year. Here are a few of the responses.

Founder of Volti and the Piedmont East Bay Children’s Choirs. 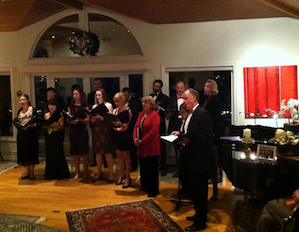 “I grew up in New England with a very strong tradition of Christmas but on the West Coast, without snow, without the European traditions so firmly ingrained, and in a world of choral music that now ranges far beyond the Christian tradition, the Haus Konzert has come to be a significant event for me. There is a great deal of meditative beauty in the music of Christmas, as well as a lot of light-hearted fun music.

The Haus Konzert, which has been going on for 25 years — the Jarretts actually built their house/haus with a music room for this purpose — is the one time when I can relax into the traditions I remember from childhood, singing carols and being with others who have come together with a similar orientation. Sigrid Jarrett, hostess of the Haus Konzert, and a former singer, is German and the Germans really know how to celebrate Christmas. A significant number of the guests at that party are also Germans. Volti performs some ensemble music but most of the program is made up of duets, trios, and solos by the Volti members. This past week there was a somewhat typical blend of Bach, Mozart, Fauré, holiday standards, some cabaret, etc.” 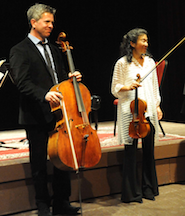 Our family has a long tradition of playing chamber music during the holidays. Last Christmas, with my wife Amy’s family, we read for about six hours. This Christmas we’re going up to Seattle. We’ll play Tchaikovsky’s Souvenir de Florence; last year we did some Brahms sextets. We play what people request and then send out the sheets a little bit ahead of time. Usually everybody comes prepared. The problem is that we just have so many string players in this family, and among our friends, and so we put together sextets.

We usually have around nine or 10 people and the one person that gets routinely excluded is me. We have two cellos — my daughter, Mariko, is the other — so I sit out. We don’t have a viola so Amy learns those parts. We’ll start in the early afternoon and play for five or six hours; we take a break for sweets and drinks, and then play on through the evening. We end up playing every piece of music in the house.

(The Wyrick Chamber Players will be performing at the Firehouse Arts Center in Pleasanton on  Jan. 12 at 2 p.m. The program includes Beethoven's quintet in A Major and the epic quintet in C Major by Franz Schubert.

Artistic Director and Conductor of the Young Women’s Choral Projects 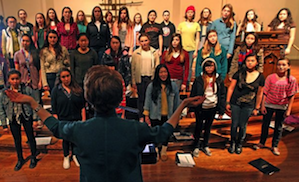 “I was brought up by a German mother and we always sang Silent Night in German. For the past two seasons, I've had my Young Women's Chorus of San Francisco sing Stille Nacht as an encore at their holiday concerts, holding candles in the darkened church, singing the first verse of the carol in German. It was a nice tradition to share with them.

The other tradition we share is Secret Santa, something I did in elementary school, and that even my high school young women love to do. They draw names, buy a few inexpensive presents for that person, and at several performances, give them anonymously with some clues. Then, on the last day of gift giving, they disclose who they are. Lots of fun!”

“There is not much of a tradition for me with these holidays. Often I have gone home to Tennessee to be with family, which I will do this year as well. But the older I get, I often like to stay in my 'real' home in San Francisco. Sometimes I do celebrate the Solstice with a walk through the woods to come out on a valley to view the sunrise (with friends Jack and Dahlia Kamesar).” 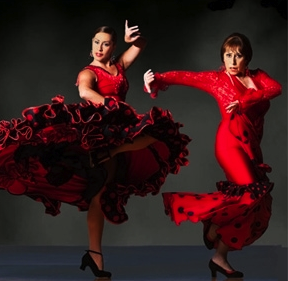 “My family always celebrated Christmas with midnight mass on Christmas Eve, followed by a family gathering at home with different types of foods from Spain (tortilla de patatas, Spanish rice, assorted vegetables grilled on the stove), and from Mexico (tamales made of pork, beef, as well as sweet ones; Spanish rice, whole pinto beans with lots of cheese, albondigas (meatball soup with vegetables and rice), green salad; and hot chocolate, egg-nog, churros, white wedding cookies.

I have very fond memories of these traditions from childhood and throughout my life!”

“For me it's often a time to do a sort of musical house cleaning. We usually have some time off. So I work on things I need or want to learn and refocus on basics. I slow things down and concentrate on relaxation, sound production, scales (Galamian or sometimes Flesch), rebalancing technique, and music. A preparation for the coming year.” 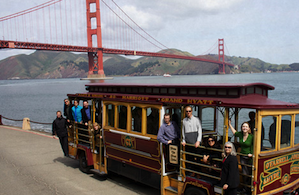 “I’ve long said I don't think many people understand how important music is to Christmas celebrations. It's a great opportunity to contact the Conservatorie, or any small group of musicians to ask them to play at your event. A string trio or quartet makes an evening party magical. A group of carolers, even for a half hour, is something that sets an evening apart in your memory.

For 15 years (the late 80's and early 90's) we had a caroling group that met and rehearsed. We had our own caroling book with arrangements of very early carols done by my friend Conrad Susa, and two or three times in the early 90's we even convinced some student musicians to bring a trumpet, percussion and recorders. It was thrilling to stand on a hill overlooking the city and let our voices carry out. People who heard us were very kind, arriving with things to eat, or hot chocolate or apple cider. I realize now that caroling is becoming rarer and rarer. I'd advise anyone lucky enough to hear carolers — to hurry out of your house and pay attention, thank them with enthusiasm, and give them a reason to return the next year.”