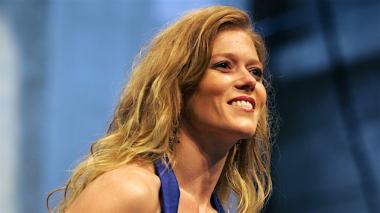 Last year, while violinist Patricia Kopatchinskja was turning the 72nd Ojai Music Festival on its head like a musical agent provocateur, Canadian soprano/conductor Barbara Hannigan — who will take center stage as music director for this year’s festival (June 6–9) — was in the audience quietly looking on.

It was Hannigan’s first visit to Ojai, but the plans for her festival were already taking shape in collaboration with Ojai’s artistic director, Tom Morris. She knew that the 12-concert schedule would feature her in her dual roles as conductor and vocal soloist, as well as her signature style of conducting and singing at the same time.

There will be two double concerts: the first (at 11 a.m. and 1 p.m., June 7) devoted to music composed and performed by John Zorn; the second an homage to the Ojai Festival’s 2005 Music Director, composer Oliver Knussen (11 a.m. and 1:15, June 8). And, as they were last year, the members of JACK Quartet will be in residence.

On June 9, the festival’s final day, Hannigan will conduct a complete performance of Stravinsky’s ballet Pulcinella, and end with her star-turn rendition of songs by George Gershwin (arranged by Bill Elliott), Girl Crazy Suite.

Because of her schedule involving the pre-Ojai European performances of The Rake’s Progress, Hannigan took time to respond in writing to questions I posed regarding the coming Ojai Festival.

Last year you attended your first Ojai Festival. What were some of your key impressions, especially looking ahead to your defining role this year?

The audience! Active listeners, game for seemingly anything, curious and generous!

Would you talk about your relationship with LUDWIG and your Equilibrium Initiative.

LUDWIG and I have been working together since 2012, and many of the players are colleagues of mine for almost 20 years. They, with EQ, are at the heart of this year’s programming, and the spirit of the LUDWIG collective and the EQ initiative will join forces with this year’s other guest artists in what I expect will be an electric union.

The festival will open with Stravinsky’s The Rake’s Progress. Tell us about the origins of this project, your collaboration with the Gothenburg Symphony, and the European performances leading up to the festival?

Rake’s Progress was the first major opera I ever sang (25 years ago), and I felt that besides its masterly music and text, the story (selling one’s soul to the devil without even realizing it) would be one that we all can identify with. Even if we look at that act as compromise — it’s something we all are caught in, often and sometimes without a clue that we have done so. I wanted to bring this masterpiece to my younger colleagues and to our partner orchestras and presenters including Gothenburg Symphony, Munich Philharmonic, and, of course, LUDWIG. So far it has been an incredible journey — challenging, exhilarating, and confronting.

It’s not unusual for an instrumental soloist to also conduct the orchestra. What are the biggest challenges of performing as a singer and conductor?

It makes more sense for a singer to do so. At least physically, our arms are free! Seriously, I was at first leading chamber music groups and then smaller orchestras without actually conducting until I finally took up the challenge for my official debut in 2011. My technique has developed with generous mentors, advisors, and colleagues, but also in a natural way to what my own musical instincts express through my particular physicality.

As a singer, like woodwind and brass players, I deal with the connection of breath to sound. And on top of that, my approach always has some element of dramaturgy in it — probably because as a singer, I am always dealing with text and storytelling. And so even when I am working in purely instrumental music, I have a subtext or dramatic imagery in my system.

You wrote that “This Festival will be a synthesis of dark and light — chiaroscuro — and brings the human voice to the forefront of many events, exploring the various ways composers have been inspired to express themselves through the interplay of text and music. Could you be more specific about the way the works contrast one another?

Well, if we look at the vocal material: Stravinsky, Gershwin, Zorn, [Mark-Anthony] Turnage, Schoenberg, folk songs, Grisey, [Claude] Vivier, and then the silliness and wit of [William] Walton’s Facade, we are really running the gamut. Indeed, I didn’t program any classical vocal rep, although both Stravinsky pieces are neoclassical and the vocal approach will be very familiar to the audience.

As we move to the Grisey and Vivier, we have a kind of spectral vocal writing, which is in a way, keening and primal: lullabies and love songs in a modern setting. The Zorn is total virtuosity and sometimes also very lyrical and honestly one of the toughest pieces I have ever learned. Performing it gives me a joy unlike anything I have ever experienced. And the Gershwin ... just wait and see!

You’ve chosen to end the festival on a swinging note. When the last Gershwin inspired tune fades away, what would you like the audience’s overall takeaway to be?

This is something I don’t want to control. I think everyone will leave with something different, something very personal.

Dawn Upshaw and Peter Sellars are collaborating to produce a unique festival that will come to Berkeley, as well. Sellars and Artistic Director Thomas Morris give SFCV the skinny.