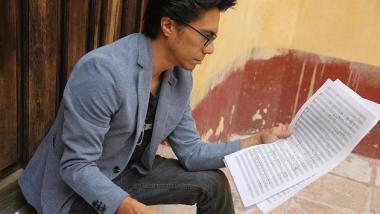 The Internationalists Have Their Say at L.A. Phil’s Mexico City Festival

There were no shouts of “Viva Mexico,” at the Los Angeles Philharmonic’s Green Umbrella concert on Oct. 17 at Walt Disney Concert Hall. This was “serious music” and of the five pieces on the program, four were world premieres commissioned by the L.A. Phil. The concert represented the culmination of the orchestra’s CDMX: Music from Mexico City festival and bore little resemblance to the parade of pop-friendly, exuberantly colorful, dance-rhythm-filled, cinematic musical performances that had come before.

In fact, all of the five young composers represented on the program: Édgar Guzmán, Juan Felipe Waller, Alejandro Castaños, Iván Naranjo, and Diana Syrse have spent as much time living, studying, working, and performing in the music centers of Europe as they have in their native Mexico. The most impressive composition of the evening, and the only one that confronted this duality head-on was Syrse’s Connected Identities, co-commissioned by the Deborah Borda Women in Arts Initiative.

The subject of national musical identity came up during the preconcert discussion when moderator/composer Veronika Krausas asked each member of the panel to talk about what it meant to them to be Mexican composers? The answers for the most part tended to be defensive or evasive, or frankly dismissive.

“I avoid using Mexican references,” said Naranjo categorically. “There are no mariachis.” “Music is without borders. Art is about uncertainty,” said Guzmán. “I spent 23 years living in Mexico and the next 23 years living in Germany. I live in Berlin but Mexico is home,” said Waller. The interesting exception was Syrse, who said simply, “Mexico is in me.”

Ultimately her composition proved the best answer to Krausas’s question. While openly embracing cultural, musical and historical aspects of her national heritage (without the use of mariachis), three movements of Connected Identities — “Nahual,” “The Tower of Babel,” and “Aleph”— explore themes of indigenous mythic culture, personal cultural duality, and a more universal sense of human connection. It was also the only piece on the program to feature its composer as its star.

Diminutive in stature, barefoot, and clad in a short shimmery dress of exotic fabric, Syrse rose from the kneeling position of a temple supplicant to prowl the stage like a wary panther. She displayed a beautifully toned voice as she sung much of the first movement in Mayan, which added an air of exoticism and deep cultural roots.

Of the opening movement Syrse writes, “A nahual is a spirit being or animistic entity closely associated with a human being in the Mexican culture. … The character of this first part is half-jaguar, half-human.”

The musical atmosphere she creates in the first movement is a world of dark shadowy places (you can almost see the creeping vines of the jungle) accentuated by bright glittering gongs like so many fireflies and pulsating marimbas reminiscent of Villa-Lobos and the exoticism of Yma Sumac.

A prerecorded montage of unintelligible voices appropriately began the second movement, “The Tower of Babel” as the central character moves from jungle mysticism into a world where she encounters other cultures and attempts to connect with them. The musical vocabulary here reflects a more international style. The third movement (whose title is taken from a short story by Jorge Luis Borges) represents the culmination of the character’s journey of discovery. “Suddenly I hear a voice,” the singer proclaims, “And I know it is mine.”

Each of the other works on the program were more academically rooted in cool explorations of sonic densities, incremental compositional development, instrumental layering and contrast, and a style of slowly evolving exploration of time and musical space.

In keeping with that idea, the concert started with a Big Bang in the form of Guzmán’s piece, Phantasy on A. Scored for a small brass ensemble and percussion it evolved as a series of blasts, slurred overlapping tones and sputters that intentionally or not took on a flatulent nature.

Echo Chamber by Waller picked up where the previous piece left off, but with a more expanded orchestration conducted by Carlos Miguel Prieto. According to the composer the title refers both to the traditional usage, describing sound reverberating in a closed environment, and the reverberation that occurs within chats on the Internet, where a conversation goes through its own echoes and permutations as layers of interaction cause subtle variations to occur.

Puntos de Inflexíon for string quartet by Castaños was a virtuoso expression of instrumental interaction and soloistic bravado. At times the piece moved at the speed of light with rapid bowing that seemed ready to cause spontaneous combustion, with other sections (“scenes” as described by the composer) that slowed to a pace that brought to mind Dali’s melting clocks. The quartet featured Nathan Cole and Akiko Tarumoto on violins, Ben Ullery on viola, and cellist Jonathan Karoly.

Naranjo’s composition for chamber orchestra, also conducted by Prieto, was another space/time exploration, as musical elements gradually coalesced out of an endless galaxy of dark matter. The process was superbly modulated. The only problem was, once the structural formations came together they ended up spinning their cosmic wheels and never going any further.

Just as it accomplished last season with its Reykjavik Festival, CDMX proved to be a fascinating survey of the multiple and diverse musical threads that make up the rich tapestry that is Mexico City.