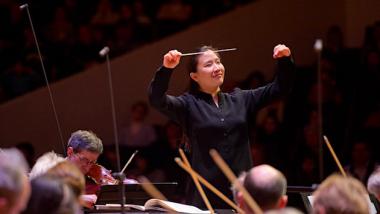 Anyone who heard Eun Sun Kim conduct Dvořák’s Rusalka last spring at San Francisco Opera knew that the performance was special. The reviewers, her artistic colleagues, audiences, were all thrilled, and a few probably thought that she might be a fit for the company’s vacant music directorship. Apparently General Director Matthew Shilvock and his search committee thought so, too, because six months later she was introduced as the company’s fourth music director. But almost every time Kim steps to the podium, whether for her breakout La bohème in Frankfurt, or her Traviata in Houston (where she was signed as principal guest conductor), or any of her orchestral and opera engagements here and in Europe, people want her to come back. Her dance card is full, and San Francisco Opera looks to have made a smart choice. SFCV spoke to her about the appointment two weeks ago.

I gather that Rusalka was the moment when things came together?

Well, I’ve only been here once, so … [Laughs] I guess the process was like, they were looking for a music director since Luisotti left … I have no idea how this happened [behind the scenes]. I was just there for Rusalka and …

Did they approach you?

Well, a guest conductor gets invited to a lunch or something. It was just a normal thing that we started conversations.

And it felt right for you?

Absolutely. Because I lived here for seven weeks. You could say it was just one production but for an opera production you live every day with them, except company free day. You rehearse with the singers, you rehearse with the [orchestra] musicians, you have meetings where you get to know the people in the company, and every artist in this Rusalka team was just on the top level, not only professionally, but they were really artists. And I was grateful that the company [was able to] put all of us together.

And not only artistically, but also Matthew [Shilvock] and Greg [Henkel, managing director], the leaders, they were all supportive and collaborative and made me feel that anything could be possible with their support. So it felt really like home from the very beginning.

Yes, because I’ve been guest conducting for the last decade and I had a feeling that I needed a home, not just a place to live but an artistic home. Because one of the advantages of guest conducting is that every time is so fresh and attractive, because you get to know new people. But time is always limited. So you have to make it, in this short time, the best thing [possible]. But sometimes you feel that, “oh, one more rehearsal would be …” — and then you have the feeling “it would be good to have my own orchestra.” I actually dreamt of it but it was not ever opera over symphony, because I’m doing all these symphony concerts. But it was the right timing, that I needed a home — I had been living out of a suitcase for the last decade.

I heard that you got a standing ovation from the orchestra after the final dress for Rusalka.

That’s happened often to you?

[Laughing] Well, sometimes. But you know, Rusalka is actually not, let’s say, standard repertory. So the music was not quite familiar to the musicians, because the last time they played it was ’95. Except for the few players who played it [the last time] it was completely new music. So I was really glad that at the end I could see how much they enjoyed making this new music their own and we found the language.

Was it the first time conducting this score for you?

Yes, it was the very first time. But as always, I just do my job — I want to find the language of the composer, what he wanted to say. And that’s why I’ve learned so many languages [six, so far] because I want to live in this composer’s language. Then you can find all these elements that you can bring out — it’s all there, it’s all written in the score.

Was Czech a barrier? That’s not one of your languages.

Well it was challenging. But, of course, you have to learn these languages when you conduct, because music is language, all about the language. I can’t say I speak Czech now, but I learned it, of course, enough to conduct this opera.

When I was the assistant conductor in Madrid, I assisted on two Czech operas, Káťa Kabanová

and Jenůfa, so [the language] wasn’t very new to me, and by the time of Rusalka, I was conducting symphony concerts with Dvořák’s works, so I was also familiar with his nuances.

It’s amazing you can pick up a language that quickly.

Well, it’s not quickly. I work hard. I speak many languages, but my mother tongue is Korean. I learned English in high school, but all other languages I learned when I was in my twenties, so it’s actually late to become a native speaker.

And you were actually cueing the singers in Czech [during Rusalka].

Yeah, well when you study a score and really learn it, you just remember all the words.

It must be hard, though, to bring the orchestra in and then also do vocal cues for the singers.

Well, imagine what a difficult job the singers have! They have to move, they have to think about technique, they have to look at the conductor and listen to the orchestra, so they’ve got a lot of jobs.

It makes you realize how much goes into bringing an opera production together on a big stage.

And not only the singers, but the stage crew behind them, and all of the support staff and [front of house] people.

How soon are you going to be helping out on the planning for upcoming seasons?

Well Matthew and I and Greg will talk about the repertory, of course, so I’ll be involved with what I’m going to conduct. I want to conduct as broad a repertory as possible — I’m not a specialist of anything. I want to conduct everything, because I admire every composer.

I studied composition and I always think, when I see a score, “how could he create such a music” and I’m just with him and I fall in love. So I don’t have any narrow focus. We’ll see the balance through the season,

Any specific operas that you haven’t conducted, that you’d like to do?

Well, I’m coming back [in September 2020] for Fidelio, which was already planned before this music directorship. And Fidelio is something that, for every conductor is kind of a dream because it’s Beethoven, and this will be [during] Beethoven’s 250th anniversary year, so I’m really looking forward to that. And Fidelio is really something that every conductor would like to do with his [sic] own orchestra.

What’s your connection to composition now?

I don’t have time, now, to think about it, but I definitely can say I didn’t stop composing; and that was my teacher’s idea. I actually got to study conducting because I took a conducting class when I was a composition student. I wanted to learn some basic skills to lead or rehearse my own pieces. And at the same time, I was the rehearsal pianist for the university opera production. And the same conducting teacher for this opera production and the class, who saw me, suggested that I consider conducting. And he saw a potential that I didn’t. And he told me, because I wanted to go to Germany after my graduation, “you can be composing even when you’re 90, but you have to start now if you want to become a conductor.”

At the beginning, it was not about “becoming a conductor,” but about studying over there. Because I was curious — the music is the same — but I was curious about the language, the musical history, because classical music was born there. I wanted to know the culture there, and I really wanted to explore. So, the beginning was just about the music. And it became my job.

That’s the best way to pick a career.

Yes, and luckily what I love is what I can do best.

Do you keep up with modern composition?

Can you tell me a little about your career in Germany?

As with many young conductors, I started from a small village — in Germany, every small village has opera — just like Karajan. And then, I got a chance, in Frankfurt, to conduct this one performance of Bohème. And they have a different system there than here. They play opera every day. So classical repertory — La traviata, La bohème, Magic Flute — they play every season. So it’s like, Monday: Magic Flute, Tuesday: Traviata, then Wednesday they’re playing this premiere — every day it’s a different opera. That means, for the young conductor, they get a chance to conduct the classical [rep] but without rehearsal.

And it’s just normal. My Bohème in Frankfurt was also without rehearsal, so I just walked in in the evening and you just conduct. And because [the orchestra] plays so many times, they know [the classic scores] from memory. So you can create in the moment, and when you do it just a little bit differently, they are just there [with you]. They are so flexible, and they get to see what the conductor wants, because they are not sticking with their parts, but they know the music.

So that production in Frankfurt was a breakthrough.

What’s another big difference between conducting there and here?

The musicians rotate, because they play every day. You get to see different musicians in every performance [of a run]. When we did Rusalka, we had five performances and just have one orchestra. And you can see the development and we get to be really closer, musically. But there it’s different every time. So it’s kind of fresh and live because you have to make it new again and again. It’s a different rhythm of life.

All the Women Conductors in San Francisco Opera and Symphony History