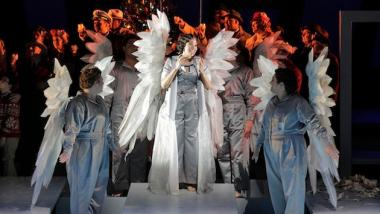 Holiday traditions can be a sensitive thing. That festive parade of concerts that begins in late November and doesn’t let up until the new year is a time-honored convention in the world of classical music, and it’s not going anywhere anytime soon. But against a backdrop of Nutcrackers and Messiahs, a few Bay Area arts organizations are offering something genuinely new. San Francisco Opera and Opera Parallèle are making the case for two contemporary works to be included in the annual holiday lineup. Local traditions, like the Oakland Symphony’s “Let Us Break Bread Together” concert and Smuin Ballet’s The Christmas Ballet, continue to innovate within their respective models. There’s still enough Tchaikovsky and “Sleigh Ride” to go around, but with so much to choose from this December, why not try something new? Here’s just a small sampling of what’s on offer around the Bay Area this month:

San Francisco Opera: It’s a Wonderful Life (Dec. 4, 7, 9) — The West Coast premiere of Jake Heggie’s It’s a Wonderful Life portends a new holiday tradition in the making. Our reviewer offered some perspective on it all, but one thing seems clear: this is fun (and popular) holiday entertainment, with performances through Dec. 9.

You can always count on the San Francisco Symphony for reliable holiday fare. The orchestra offers an established, month-long lineup that includes classical and popular favorites, celebrity guests, and family-friendly movies accompanied by live orchestra. Here are some of the highlights:

Handel’s Messiah (Dec. 14-15): Jane Glover returns to conduct that ubiquitous Christmas classic — one of several renditions around the Bay Area this month.

Home Alone (Dec. 19-21): The highest-grossing holiday film of all time boasts a John Williams score, to be rendered live by the S.F. Symphony and three children’s choruses.

For a full list of holiday events hosted by the San Francisco Symphony, check out the orchestra’s online calendar.

Smuin Ballet: The Christmas Ballet (Dec. 5-9) — Now in its 23rd edition, the Bay Area’s local alternative to The Nutcracker is a holiday favorite in its own right. Performances play at the Mountain View Center for the Performing Arts through Dec. 9, before moving to the Yerba Buena Center for the Arts on Dec. 13.

San Francisco Ballet: The Nutcracker (Dec. 12-29) — Yes, it’s expensive, but oh, so special. Knockout set and costumes, a wonderful cast: there’s a reason they do 30-plus performances a year.

New Ballet: The San Jose Nutcracker (Dec. 14-24) — Ballet is alive and well in San Jose, and this year, the reincarnated New Ballet offers two different Nutcracker productions — the full two-act ballet, plus an abridged edition for younger children, titled My Very First Nutcracker, which runs just about an hour.

Oakland Ballet: Graham Lustig’s The Nutcracker (Dec. 22, 23) — The Oakland Symphony accompanies this production, which offers a special post-performance reception, with holiday sweets and characters from the ballet, available as an add-on ticket purchase.

And for a less conventional take, try the San Francisco Lesbian/Gay Freedom Band’s…

Dance-Along Nutcracker (Dec. 8, 9) — It’s a three decades-old holiday tradition that started as a fundraiser. Now at the Yerba Buena Center for the Arts, this parody production takes a different approach every year. For 2018, it’s “Clara Potter and the Elder Baton,” perfect for Harry Potter fans of all ages.

Marin Symphony: Holiday Concerts (Dec. 11) — Alasdair Neale conducts the annual holiday concert, but the real push this year is the Youth Orchestra, who are raising funds for their first European tour in 20 years. Catch ensembles of young musicians around the North Bay this month, at Town Center Corte Madera and the Marin County Mart.

Oakland Symphony: Swing and Soul – Let Us Break Bread Together (Dec. 16) — Michael Morgan’s “inspired, multifarious, musical bash” is a venue for wide-ranging inclusiveness. Plus, an evening of great music. SFCV’s only complaint, issued annually: There’s only one performance!

Santa Rosa Symphony: Holiday Soundtracks (Dec. 16) — Classic movies are the best part of the Christmas season, and the Santa Rosa Symphony brings to life the music from some favorite holiday films old and new.

California Symphony: ‘Tis the Symphony (Dec. 22) — Howard Blake’s score to The Snowman, performed live with film, is the standout work on this program of holiday pops standards.

Ragazzi Boys Chorus: For the Beauty of the Earth (Dec. 9) —  Ragazzi’s boys sing of nature’s beauty, celebrating human resilience in the face of challenges.

Kitka: Wintersongs (Dec. 8-21) — This popular musical celebration of the power of community singin, takes advantage of the position of Eastern Europe as a crossroads of religious and musical traditions. The women of Kitka have mastered repertory from all over and include everything from Sephardic songs to Eastern Orthodox sacred choral works; to Baltic pagan incantations for the return of the Sun Goddess, to Romany tunes and much more, some in arrangements by choir members.

California Revels: Ancient Mysteries of Andalusian Spain (Dec. 8, 9, 14-16) — The Revels blends traditional music, dance, ritual, and folk plays into a program presented by a large volunteer chorus of children and adults drawn from the community, along with a number of highly talented professional actors, musicians, artists, directors, and “bearers of tradition” from many cultures. This year, the Revels visit Andalusian Spain, circa 1600. “Three individuals — a young Moorish woman, a Sephardic Jew, and a Castilian scullery maid — happen to meet, each armed with a mysterious clue that is guiding them on a quest. They are all hoping to find their way back through time to the era of La Convivencia, a time when, as they understand it, all three cultures — Muslim, Jewish, and Christian — lived in a spirit of tolerance and peace.”

The Gryphon Carolers: Holiday Concert (Dec. 9) — The Gryphon Carolers formed in 1975, when composer/guitarist Ed Johnson and singer-songwriter Carol McComb recruited students from their classes at Palo Alto’s Gryphon Stringed Instruments. In early years, the Carolers serenaded passers-by on the streets of Palo Alto. Today, the Gryphon Carolers is a 30-voice ensemble with guitar, piano, mandolin, fiddle, saxophone, bassoon, bass, percussion, and more. The group features unique takes on classics, like a Brazilian-influenced “Hark, the Herald Angels Sing,” and original songs.

Chanticleer: A Chanticleer Christmas (Dec. 10-23) — The one Christmas concert to rule them all. This men’s chorus is one of the best and their Christmas program is a tried and true favorite, featuring music from throughout their very expansive repertory. If you haven’t caught up with this group, they’re helpfully scheduling 12 performances around the Bay Area this year. They’re also performing in L.A., New York, Chicago, and a few other places besides.

San Francisco Contemporary Music Players: Sonic Meditations (Dec. 16) — This community event is for contemporary music lovers. SFCMP hosts with a performance of one of Pauline Oliveros’s best works, and then the audience is invited to join in musical recitation of an ancient Confucian text.

San Francisco Girls Chorus: Holidays at Davies (Dec. 17) — The extraordinary chorus performs this year with the Kronos Quartet and women’s chorus Musae. As is traditional with SFGC, the music spans the globe and includes new music, this year from Reena Esmail and Michael Gordon. 300 choristers from all of the Girls Chorus levels participate.

The Little Prince to Land on This Planet Again

Opera Parallèle’s production tells the beloved story and is a welcome addition to holiday fare in the Bay Area.

The renowned conductor talks about her long career, her new book on Handel, and her upcoming stint with the S.F Symphony.