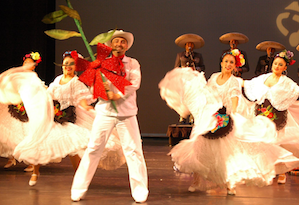 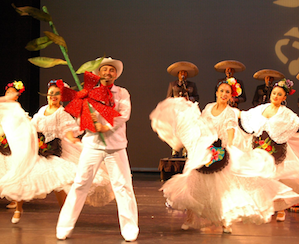 This weekend the offering is a holiday concert featuring some 30 dancers performing choreography reflecting Christmas traditions in Mexico, particularly traditions from the state of Oaxaca, which lies in the southernmost part of the country. There are at least 50 different styles of folk music and dances in Mexico, and eight of those originated in Oaxaca. This performance features five of those styles.

What distinguishes folk culture in southern Mexico is often the lack of Spanish influence, and so the costumes reflect indigenous peoples — unbleached cotton dresses with henna embroidery, for example. And no collared shirts for men, or the silver pipes on the pants that some mariachi players wear. Moreover, the dancing is not in that erect style reminiscent of flamenco, which is sometimes a signature of Mexican folk dancing.

What’s interesting about Ballet Folklorico is that it’s not entirely traditional, rather a fusion — and a controversial fusion at that — of past and present styles.

“We walk a fine line,” says Stephen J. Koneffklatt, a co-founder of Ballet Folklorico and now director of the company. “Tradition is emulated but changed. There are those who insist we should stay with tradition, but you have to remember that all this is based on an oral tradition and no one knows exactly what the tradition is. This goes back sometimes 300 years.”

Koneffklatt, 34, and a teacher at San Lorenzo High School, adds that his purpose is not just to educate but to inspire: “One criticism is that we are discrediting the value of tradition by modifying it. But if we don’t have people interested in what we’re doing, then the traditions, no matter how exactly they may be interpreted, will die. What I want is for people to experience this and be excited about it, talk about it and begin to engage Mexican culture.”

Beyond performances, Koneffklatt has established a school for kids ranging in age between four and 13. The school’s mission is to impart cultural awareness but also to divert kids away from TVs and computers, and complacency. Koneffklatt says he has saved at least one at-risk boy from the lure of local gangs.

“We have a community here made up of professional and nonprofessional dancers, adults and children, and we all come together to realize the value of traditional music and dance.”

One member of the company is Emily Magana, 22, a student at Ohlone Community College, where she studies graphic design. She’s been dancing for 10 years, and for the last two with Ballet Folklorico. She imagines that one day she might dance in Mexico City with Ballet Folklorico de Mexico, the group started by the renowned choreographer, Amalia Hernandez.

“I’ve never been somewhere that makes you feel so at home. They really welcome you with open arms. When I first came, I didn’t feel like I was part of anything in my life and when I danced it didn’t seem so important. But now I’ve learned how much dancing means to me. And we all push each other, but not in a bad way.”

“I’ve also learned to share my feelings in a way I never could,” she added, and for a moment, for whatever reason, she was overcome with emotion. “When things are not going well they can really talk you through it. They really care.”

Koneffklat, a former professional dancer, grew up in Berkeley and graduated from UC Santa Cruz. He has been involved in dance since childhood. “I’ve been doing this all my life and never considered stopping. I get enormous satisfaction from teaching others to dance but also from making a difference to some of these kids who want something more out of life. I do it because it’s a passion, not a job.”

He’s married and has two small children. Asked whether he would encourage his children to follow his path, he hesitated. “To be frank, I would say ‘no.’ There’s just so much instability in what I do. The ups and downs are a lot to endure. I would like them to have an easier life.”