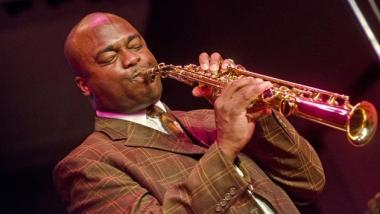 Jazz’s pantheon is populated by an extravagantly idiosyncratic menagerie of individuals, but even in that colorful company Rahsaan Roland Kirk stands out. During his relatively brief career, the virtuosic multi-instrumentalist produced a singular body of rollicking, rip-snorting, heart-baring music that erased distinctions between jazz roots and avant-garde practices. Blind from a young age, he confounded jazz critics with his uncategorizable sound, and left a trail of iconic images of playing multiple saxophones simultaneously.

The only bandleader who fully integrated Kirk’s sweeping command of jazz history was bassist Charles Mingus, a composer similarly unbound by jazz trends and fashions. He featured Kirk on the 1962 Atlantic album Oh Yeah on flute, siren, tenor saxophone, manzello, and stritch (obscure saxophones associated solely with Kirk). But it was as a leader that Kirk (1935-1977) revealed an astonishing sonic universe that encompassed his incisive philosophy of human nature, prophetic call for racial justice, and psychedelic sense of humor.

Born and raised in Columbus, Ohio, as Roland Kirk (he said he adopted the name Rahsaan after it came to him in a dream), the saxophonist had deep ties to the Bay Area. His performances sparked a series of epiphanies amongst fellow musicians and fans so profound that Steve Borkenhagen created the Eulipia Restaurant in 1977, adopting a term for creative beings from a verse by poet Betty Neals that Kirk set to music, “Theme for the Eulipions.”

Five years ago, after a remodel, the downtown San Jose space reopened under the management of the next generation of Borkenhagens as the jazz club Cafe Stritch. As they have every year since reopening, the club celebrates Kirk's birthday by hosting the Rahsaanathon led by trombone great Steve Turre.

This is Carter’s third Rahsaanathon, and Turre credits him with taking the event “to another level. James has a spirit very much like Kirk’s,” Turre says. “He knows the whole history and can take it anywhere, from New Orleans to way outside. Matt Clark has been doing it since day one, and he’s a fabulous pianist, plays the real deal swing. He got that New York training.”

One of jazz’s most celebrated trombonists and a familiar face to many via his long tenure in the Saturday Night Live Band, Turre was born into a Mexican-American family from the East Bay and grew up in Lafayette. He was an 18-year-old freshman at Sacramento State when he first heard Kirk perform at the Jazz Workshop in North Beach on a fall Saturday night in 1966.

“I was blown away,” he recalls. “I had never heard anything like that in my life. I was so moved I had to go talk to him. He was friendly and asked if I play. I told him I play trombone. He said, I like trombone, come by tomorrow and you can play for the kids at the Sunday matinee. I sat in with the band and he invited me to stay and play that night. I was excited as all hell.”

It was the start of a relationship that lasted until Kirk’s death on stage in Indiana in 1977. At first Turre would join the group when they came through town to play the Both/And club, getting a nominal fee of around $50 a week (“But it was a real gig and I was getting paid!” he says). Later, he played with Kirk at Keystone Korner, the West Coast’s premiere jazz club from 1972-83. The venue was founded and owned by Todd Barkan, who had befriended Kirk as a jazz-besotted adolescent in Columbus.

Barkan, a prolific producer who received an NEA Jazz Masters award in April, would accompany Kirk to record stores and read him the liner notes. Years later, Kirk was one of the first artists Barkan booked at Keystone, a run documented on the classic 1973 double live album Bright Moments (Atlantic) that established the club’s international reputation. Keystone was also where trumpeter Woody Shaw introduced Turre to drummer Art Blakey, which led to the trombonist moving to New York City and becoming a Jazz Messenger.

Becoming a regular member of the band, Turre started touring with Kirk, and credits the saxophonist with “really opening me up to the lineage, the importance of the music’s history,” he says. “Rahsaan taught me you don’t have to try to be different. Be yourself. But that’s hard to do.”

While he’s in town, Turre also performs Monday, Aug. 13 at the Oakland Public Conservatory with bassist Amina Scott, pianist Glen Pearson, and drummer Carl Allen. The concert kicks off a series of events and soirees highlighting the musical legacy of the historic California Hotel, which was one of the East Bay’s premiere black music venues in the 1950s and 60s.

“It’s not perfect, but it starts with first early recorded work by Louis Armstrong and goes all the way to the present day,” says Herring, who grew up in Vallejo. “You hear the development in the music. If we make it through 100 years depends on how long the guys take solos. I don’t want to cut guys off. Sometimes we only get to the 80s, and I can’t get them to play any Snarky Puppy.”

Kirk’s music couldn’t fit neatly in a production like Herring’s “Story of Jazz” because Kirk created his own temporal plane. Which isn’t to say he was disengaged from history. An intrepid activist, he used his music as a clarion call supporting the struggle for civil rights and fair treatment, a stance that has long attracted Herring.

“Rahsaan was in tune politically, and that was reflected in his music,” Herring says. “He didn’t have sight, but he had his eyes on the world and his music is very visual that way. When you think about it, Turre, James Carter, and I are all coming together to play the same ensembles that one person played. That’s pretty unbelievable, but you can see him right there on video.”

Femi Kuti: True to the Source

Fela Kuti’s son extends his father’s legacy, while creating his own.