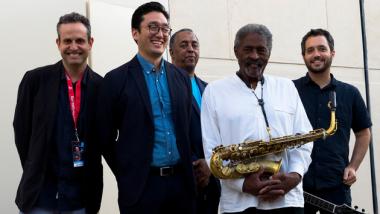 Charles McPherson makes aging look easy, and sound damn good. Sauntering onto the Dinkelspiel Auditorium stage Sunday night wearing a white guayabera and looking a long decade younger than his recently celebrated 79th birthday, the alto sax great made a persuasive case that bebop is the language of the future. His all-too-rare Bay Area performance kicked off the final week of the Stanford Jazz Festival, which over the past decade has become his primary Northern California showcase.

Sharing a piece of the “greatest living alto saxophonist” title with Gary Bartz and Lee Konitz, McPherson came up on Detroit’s fecund jazz scene of the 1950s. He gained international attention during his long run with bass legend Charles Mingus (1960-72), an intermittent run during which he also recorded a series of acclaimed albums for Prestige and Mainstream. Like fellow Motown jazz luminaries Tommy Flanagan, Barry Harris, Kenny Burrell, and Paul Chambers, McPherson honed a personal approach to bebop’s rhythmic and harmonic idioms that makes everything he plays sound timeless, logical, and emotionally trenchant.

He opened the concert with “All the Things You Are,” an arrangement that referenced the version captured on the classic 1955 recording Mingus at the Bohemia (Debut). The band sounded a little tentative, but by the second piece, his spritely terpsichorean sprint “Marionette,” the quintet had locked in, navigating the jagged melody with verve. As a composer, McPherson has a gift for crafting sinuous, blue-flame ballads and high velocity jigsaw puzzles that cohere with mathematical precision, like his hat tip to bebop piano patriarch Bud Powell, “Bud Like,” a searing 12-bar blues from his most recent album, 2015’s The Journey (Capri Records)

While McPherson gave an apocryphal account of eden ahbez’s life in introducing “Nature Boy” (the story of the song and composer is far stranger than McPherson’s rags-to-riches-to-rags tale), the quintet wrung the Hebraic melody dry, squeezing every last drop of beatific melancholy from the tune. This was a set by an artist clearly in his comfort zone.

Building from the drums up, he was accompanied by his son, the accomplished trap set stylist Chuck McPherson, and the rhythm section tandem of pianist Jeb Patton and bassist David Wong, who often perform together in trio contexts and with illustrious veterans like the brothers Jimmy and Tootie Heath (on saxophones and drums, respectively). Patton in particular turned every solo into a seize-the-moment excursion, playing with two-handed virtuosity, whether caressing a ballad or hammering block chords on a hurtling burner.

Israeli-born guitarist Yotam Silberstein, a rising star who’s thriving on the New York scene in both straight-ahead and Brazilian jazz situations, was the wild card, providing rich harmonic support and soloing with a bountiful flow of well-edited ideas.

McPherson wrapped up the set with a sumptuous version of “Embraceable You” that fully revealed the rich, lustrous quality of his tone, and a locomotive arrangement of “Off Minor” that distilled Monk’s dark chord changes. For a searing closer, McPherson and the band tore through Rodgers and Hart’s warhorse “Lover” with such grace and ferocity that an encore seemed superfluous.

Seasoned pros and upcoming tyros offer some of the best jazz tickets in the Bay Area this summer.