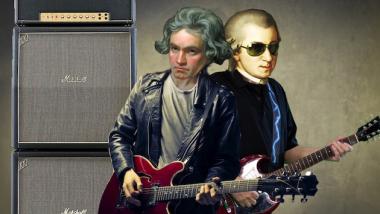 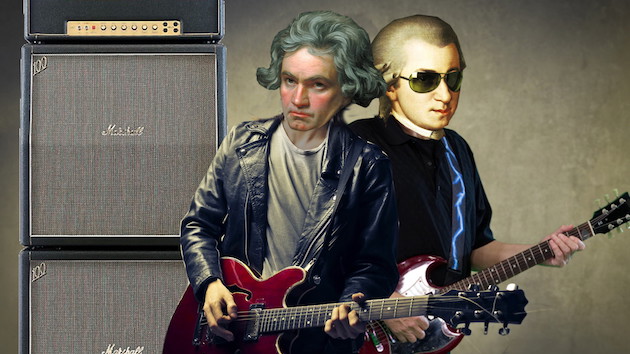 If you spend much time talking to art music composers, you realize pretty quickly that their public musical lives are only part of the story — that privately, many of them listen to, and in some cases, perform, a broader range of music than you might expect. Jazz, of course, has long been a part of the classical composer’s accepted lexicon, with enthusiasts going as far back as Ravel. And “world music” has turned up in all kinds of places, starting with Lou Harrison and Benjamin Britten, and lying at the heart of Steve Reich’s work, at least in principle, if not in terms of timbres or tunings.

Until recently, composers who grew up passionate about rock music, even as they studied classical music — of whom there are now a couple of generations — have largely kept their pop interests to themselves. But they are everywhere. At the end of a recent interview, Dan Sonenberg, a composer who was about to have his first opera premiered in Pittsburgh, turned the conversation to the question of which Kinks album was the group’s best. The composer and conductor Esa-Pekka Salonen, during a series of interviews in 2006, told me about his excitement upon meeting members of Korn on an airplane, and then arranging to have dinner with the group. Even composers as intensely cerebral as Milton Babbitt had a largely hidden pop side: Had his early efforts been successful, he might have made a career writing Broadway-style theater music, a passion he maintained despite having taken a very different path.

This is a door that swings both ways: When Salonen met with Korn, he thought he might try to interest the band in Stravinsky’s early adventures with rhythm and harmony — a bit of cross-genre proselytizing — only to find that Korn’s players were quite familiar with Stravinsky’s music. Jonny Greenwood, of Radiohead, played viola as a child, and was particularly interested in Messiaen. And when Phil Lesh, the Grateful Dead’s bassist, arranged to have lunch with Elliott Carter, he brought along a stack of Carter’s scores, and ended up subsidizing a recording of the composer’s music.

But now classical composers, particularly those who also perform, are giving their inner rockers some time in the spotlight, and the yield has been interesting. Where rock stars with a yen to compose classical music tend to use 19th- and early 20th-century models (Zappa and Greenwood are among the few exceptions), classical composers who decide to rock do it persuasively, and with a clear sense of the genre’s history and arcana.

It also, however, plays havoc with listeners’ internal musical taxonomists. Are these works pop or classical? Their instrumentation makes you want to file them under rock, but their structures and motivating processes (often minimalist or post-minimalist) pretty much invalidate them as potential pop hits, or even pop-radio fodder. Rock does, of course, have its less commercial byways, and when classical musicians rock, they tend to gravitate towards these subgenres. 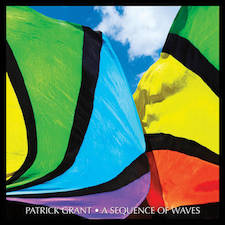 ew album, A Sequence of Waves (Twelve Stories and a Dream) (Peppergreen Media) drives that point home. Grant began his career, after all, writing chamber music and incidental theater music, mostly using conventional classical instrumentation. He made his way towards electronic works and certain corners of non-European musics — the gamelan, most notably — in the 1990s. But he also spent some time with Orchestra of Crafty Guitarists, a project directed by Robert Fripp, the founder of, and creative force behind, King Crimson. Electric guitars began turning up in Grant’s music as early as 1986 (in The Power of Light, for electric guitars, bass, synthesizers, and percussion), and if his use of rock instrumentation was sporadic back then, his experiments have become bolder — and, it seems, the central focus of his work — over the past decade.

A Sequence of Waves (Twelve Stores and a Dream) is a fascinating merger of the universes Grant inhabits. “Lucid Intervals,” its opener, is a Trojan horse: It begins as a Glassian chamber score, with a repeating viola figure around which a string, keyboard, and percussion ensemble weaves an increasingly ornate, contrapuntal fabric before crashing into chaos – and a swirling, electronic ending that tells you that this won’t be a conventional post-minimalist collection.

From there, it’s quickly down the rabbit hole. “Driving Patterns,” the second track, begins with a 1960s pop reference, in the form of the brisk repeating oscillation of a fifth that opens the Easybeats’ “Friday on My Mind.” Beyond that first few seconds, the figure never returns; instead, the piece grows into a punchy texture with angular melodies in a style that brings Fripp’s work to mind.

It’s not the last we hear of that style: In the insistently riffy “To Find a Form That Accommodates the Mess” and “Breaking Butterflies Upon a Wheel,” Grant’s distortion-laden guitar toggles between Fripp-style solo lines and quasi-Minimalist repeat-and-morph figures, which are set against an assertive, tightly interlocking guitar, keyboard, bass, and drums backdrop. And there is a distinct Zappa influence in “Firearms” (the finale of a mini-suite that also includes “Alcohol” and “Tobacco”) and in the “Primary Blues,” which pulls together blues riffs, Leon Russell-like piano punctuation, a recurring touch of 60s go-go music, unpredictable rhythmic play, and screaming metal guitar solos, played by the composer-guitarist Nick Didkovsky.

There is a lot to be said for the energy Grant and his ensemble bring to these pieces, but the collection’s real joy is its variety. True, “Prelude I” introduces another 60s reference (a reconfigured version of the riff that opens Johnny Rivers’ “Secret Agent Man”), but that piece and “Prelude II” are richly-detailed studies for solo electric guitar and some of its sound-shaping devices.

“Seven Years at Sea” and “Lonely Ride Coney Island” are largely electronic essays, the first built around looped and heavily processed excerpts from a 1934 Library of Congress recording of sea chanties, sung by Elita, Mary, and Ella Hoffpauir, and the second a wistful soundscape of electronic keyboard washes and what sound like electronic keyboard washes and sequencer riffs that begins to brighten, at least slightly, with John Ferrari’s drum entrance at the piece’s halfway point. And the album’s closer, the only piece not by Grant, is a radically reworked version of Antonio Carlos Jobim’s “One Note Samba,” for telephone tones and rock band.

Like Grant, Alan Kryszak splits his time between straightforward classical works and non-commercial rock, although where Grant’s rock works are purely instrumental, Kryszak moves a step closer to the mainstream by giving some of his rock pieces lyrics (which he sings himself in an easygoing, unpolished baritone). His classical pieces are beautifully wrought, and include a lovely set of works for clarinet and orchestra (which he released as All The Luck, in 2008), several sets of piano works, and Having an Atonal Christmas, for string quartet and harp, as well as soundtrack music for silent films, including an inventive flute and guitar score for The Hunchback of Notre Dame and a piano concerto that doubled as a score for Dr. Jekyll and Mr. Hyde¸ and that the pianist Anthony DeMare has recorded. 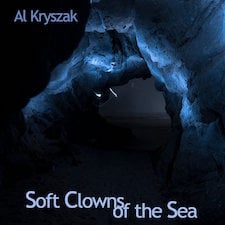 Kryszak’s new Soft Clowns of the Sea (Orchard) is a bit of everything — eight songs in a folk-rock style, 11 instrumentals, some with soaring electric guitar lines, others more jazz-tinged, both harmonically and texturally, and a healthy measure of thematic recurrence and transformation, in the best classical tradition.

Those recurring motifs give the album a sense of unity, despite its constantly shifting textures, as do the lyrics, which touch on (usually metaphorically, sometimes directly) racism, me-first nationalism, and other dire aspects of our currently fractured society. Kryszak, who is also a filmmaker, has created a video for the closing track, “Time Without Guilt,” using propaganda footage showing how happy Japanese-Americans were to be interned during World War II.

As a protest album, Soft Clowns is certainly timely, but for me, its greatest strengths lie in the instrumental works, which have an exploratory feel, and offer a broad range of textures, to say nothing of an improvisatory sensibility that offers a measure of vibrancy to counter the album’s overall dark spirit.

Some recent ventures by classical musicians beyond their normal precincts are hybrids — not crossovers, in which classical players perform established pop songs, but collaborations between classical players and musicians from other realms, in ways that do credit to both sides. 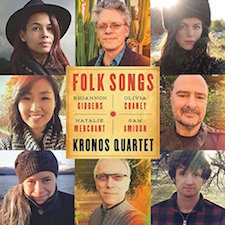 On Folk Songs (Nonesuch), the Kronos Quartet invites guests from the pop world — Sam Amidon, Natalie Merchant, Olivia Chaney, Rhiannon Giddins to each sing a couple of folk standards (or in Giddins’ case, a standard and her own bright-hued “Lullaby”) in arrangements by Nico Muhly, Donnacha Dennehy, Jacob Garchik, and Gabriel Witcher.

Admittedly, the focus is on the vocal lines, and having four singers, each with distinctive vocal qualities, was a nice touch. The string scores, though attractive, mostly sound similar, usually with a drone to support the opening verse, and expanding from there. Among the exceptions are Dennehy’s arrangement of “Rambling Boys of Pleasure,” with its bagpipe-like texture, Muhly’s country-fiddling score for “I See the Sign” and Garchik’s lively setting of “Johnny Has Gone for a Soldier.” The Kronos has a moment to itself, as well, in Garchik’s arrangement of the blues singer Geeshie Wiley’s “Last Kind Words.”

A more striking hybrid is The Way Is Read (Nonesuch), a collaboration between the Staves, the British vocal trio, and yMusic, the New York-based new-music sextet. The idea of combining the Staves’ sweetly harmonized folk sound with yMusic’s harmonically edgy virtuosity came from Justin Vernon, the principal songwriter and front man of the band Bon Iver, who invited the ensembles to perform together at his Eaux Claires Festival, in Wisconsin. 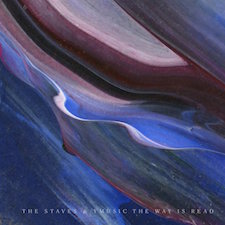 Apart from an excerpt from Marcos Balter’s Bladed Stance, offered here as instrumental connective tissue between songs, and Sufjan Stevens’s mildly Coplandesque Year of the Dog, the arrangements are either by the Staves themselves, or by the Staves and Ryan Lott, another composer with a hand in both the classical and alternative pop worlds (the latter as the founder of Son Lux).

Lott, whose music was the subject of an earlier yMusic release, clearly understands how both groups work, and where the sweet spot of the collaboration was likely to be, so even in pieces where their qualities might otherwise seem at odds — for example, in the title track, which juxtaposes a simple vocal melody with a frenetically chirpy backdrop — Lott finds common ground where the ensembles can meet effectively. The simply melody, for example, morphs into an intricately harmonized call-and-response, and then into a repeating cell that mirrors some of the instrumental writing earlier in the setting.

Probably the main reason this pairing of seemingly disparate ensembles works so well is that the music at hand forces each group to expand its reach without having to either scale back or compromise its own sound, approach, and personality. Whether you come to it for the love of Staves’ beautiful, open vocal textures, or for yMusic’s virtuosity and post-modernist sensibility, there is something joyful here that will keep you returning to further unravel the textures of these pieces. And whether you file the disc under folk or classical music is entirely beside the point.