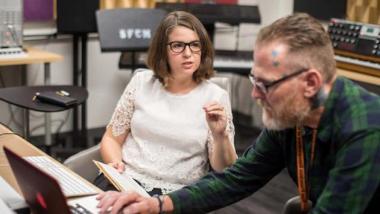 Orchestration and counterpoint still apply. But now there’s another layer of sonic considerations. Composers have to have the skills to put it all together

— MaryClare Brzytwa, Executive Director of Technology and Applied Composition at the San Francisco Conservatory of Music.

In Blade Runner 2049, composer Hans Zimmer references the original movie by incorporating the Yamaha CS-80 synthesizer that Vangelis used to create the first score. By chance, the next night I saw the movie broadcast of Thomas Adès’s opera, The Exterminating Angel, which uses an Ondes Martenot, one of the first electronic instruments, invented in 1928, by Maurice Martenot.

These two reference points show how far we have come. Composers now have access to a comprehensive array of digital instruments, computer programs and recording options. And if the goal is to compose for media— be it for film or video games— learning to use them is an absolute necessity.

“Today, a composer working in the realm of media is expected to be able to do everything,” says MaryClare Brzytwa, Executive Director of Technology and Applied Composition at the San Francisco Conservatory of Music. “If you think your music is so great you can write it down on a piece of paper and everyone else is going to jump up to do all the technical things for you and make it sound good, you’re wrong. The only composer who can do that is John Williams,” she adds with a laugh.

Learning the Tools of the Trade

“In 2017, composers have to be able to use a DAW (Digital Acoustic Workstation) and Pro Tools, access sample libraries, use computers and synthesizers, process sounds, use Midi (Musical Instrumental Digital Interface), learn various interactive formats, record classical musicians, and engineer the mix. AND do it all in a fast and professional way. If you want to work in film and media and you don’t have those skills, you are going to be at a disadvantage.”

In an effort to stay ahead of that curve, the San Francisco Conservatory of Music created its Technology and Applied Composition curriculum.

“I wanted our TAC program to emphasize what technology can offer classical musicians and composers. Its mandate had to be a music/technology program that was specifically focused on media,” said Brzytwa.

According to the Conservatory’s own description, the TAC program focuses “…on industry-standard technologies and professional composition workflows. Students … gain access and perspective on the bustling culture and industry of music for media.”

Classes include Introduction to Sound Recording, Production Techniques in Logic Pro, Game Audio, and many more that emphasize the tools of the modern musical trade.

Two years and $1 million went into converting the Conservatory’s basement into a state-of-the-art recording facility.

“There were jackhammers pounding and holes in the ceiling,” Brzytwa recalls. “People wondered what was going on? Who are these people? We created a unique recording studio you can patch to any of the halls with 32 channels of analog. In essence, we turned the whole building into a modular recording studio. It’s professional level recording and students are trained to be the engineers. I think our programs have greatly improved the Conservatory. We also have put together an adjunct faculty of highly skilled and experienced media professionals.”

One of the adjunct professors is composer (and self-professed computer geek), Lennie Moore.

“I’ve been composing for media and working with computers for over 30 years,” Moore said. “When I graduated from the Berklee School of Music in 1983 there was no such thing as a Digital Audio Workstation. Pro Tools didn’t exist. Midi didn’t exist. Digital notation software didn’t exist. What we are trying to do now is give our students a tool kit on how to think of the use of technology in compositional practice.”

Several Universities including UCLA, USC, and the University of Michigan are now offering classes and degrees in film music and media-related composition. They are also forming associations with key industry organizations like Skywalker Sound and the Sundance Institute.

Peter Golub teaches media composition at UCLA and coordinates the Sundance Music and Sound Design Labs, which annually bring a select group of young composers to Skywalker Ranch in Marin County and gives them the opportunity to work closely with professional sound designers and film directors.

“For us,” said Golub, “it’s about the collaboration, because so many filmmakers tend not to have been taught about music. They come to this very important and last big step in the whole evolution of their film. They’re in post-production. They’ve finished editing and now they’re going to add the music. There can be a great deal of trepidation. Our composers have the chance to work with them on spotting their films, deciding where music will be the most effective. It’s ultimately about understanding the film and what the film is about. It offers the composers a place to experiment and expand their musical vocabulary.”

“It was personally life altering,” she feels, “not in its initiation into film scoring but in the attention and consideration paid to micro-details, the breakdown of the art and craft of writing music for movies down to its elemental particles. The new interaction between sound and music is radical and amazing. It’s becoming less important whether you’re wearing the hat of a composer or a sound designer.

“For the past 10 years, I’ve homed in on the skills of mixing sound,” she said. “As I’ve learned more about the way sound goes from being composed to being reproduced, the whole line between composing and sound design has become blurred.”

Randy Thom is the director of sound design for Skywalker Ranch.

“This crossover between musical composition and sound design is new, mostly unexplored territory, which makes it exciting,” he said. “Music is a powerful tool. In some ways it’s the most efficient tool a filmmaker has in terms of how much bang you get from it dramatically compared to how much it costs.”

At the same time, acquiring these new tools, Brzytwa feels, offers composers a firmer position in the competitive media marketplace.

“It certainly helps to justify an education in the arts if you know you’re going to graduate with real skills that will help you survive in the world. And if this technology represents where we’re headed, you want to be at the tip of the spear.”