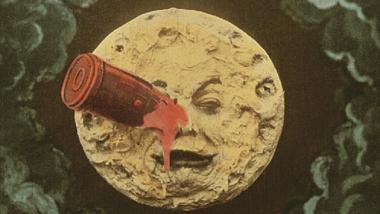 The Countdown Has Begun for the LA Phil’s Moon Shot

Time was running out for Andrew Norman. He’d accepted a commission from Simon Rattle and the Berlin Philharmonic to compose his first opera and he couldn’t settle on a subject. He was beginning to feel like he’d signed for a Mission Impossible episode.

On March 2 and 3 at the Walt Disney Concert Hall the results of Norman’s impossible mission, A Trip to the Moon, will be presented in an all-new production conducted by Teddy Abrams. It’s being staged by Yuval Sharon with choreography by Diana Wyenn, sets by Takeshi Kata, lighting by Christopher Kuhl, video design by Kaitlyn Pietras and Jason H. Thompson, and costumes by Ann Closs-Farley. A large cast of actors and vocal soloists will be joined by the combined forces of the Los Angeles Philharmonic, the Los Angeles Master Chorale, the Los Angeles Children’s Chorus, the Hoover Street Elementary School Chorus, and members of YOLA, the Youth Orchestra of Los Angeles. The opera will also be presented in a series of four special concerts for 7,000 Los Angeles school kids.

The Rhythm Is It was a program that began 10 years ago when Simon Rattle engaged the Berlin Philharmonic in a large-scale educational community outreach program. Its first presentation was a staging of Stravinsky’s ballet, The Rite of Spring, choreographed entirely for children. Five years later, Rattle expanded the program into the realm of opera using Benjamin Britten’s Noah’s Flood as a model. It became known as the Vocal Heroes Choir Project.

“The idea,” Norman says, “was that these operas would combine world-class singers and musicians with untrained children and adults from the community.”

The first opera to be presented in 2015 was Jonathan Dove’s What’s lurking in the labyrinth? It was followed in 2016 by The Two Fiddlers, by Peter Maxwell Davies. Norman’s opera was to be the third presentation, a co-commission with the London Symphony and the Los Angeles Philharmonic.

Norman, however, faced two daunting challenges: One, he had never written an opera, or for that matter, any extensive choral music. Second, he had no idea what his subject was going to be. And the clock was ticking.

“Simon told me I could pick whatever subject I wanted as long as it involved the community in an active way, had parts for adults’ and children’s choruses, and spoke to universal themes.”

Then, just as Norman was about to panic, the pieces began to fall into place.

“At the last possible moment, a friend of mine, Brian Seltznick, who wrote The Invention of Hugo Cabret (from which the movie Hugo was made) suggested I look into the novels of Jules Verne and the films of Georges Méliès.”

He read Verne’s 1865 novel, From the Earth to the Moon and watched Méliès’s fantastical 1902 silent film, Le voyage dans la lune. Then, to his surprise, Norman discovered an all-but-forgotten opera-comique by Jacques Offenbach, Le voyage dans la lune (in 4 acts and 23 tableaux) based on the Jules Verne novel. First performed in Paris in 1875, it had greatly influenced the look of Méliès’ film.

“I had all this swimming in my head,” says Norman, “19th-century science fiction, Offenbach’s light opera with can-canning on the moon, and the film! I realized the plot contained themes that could have contemporary relevance, since it’s essentially about how two groups, the astronomers and the moon people, that have nothing in common, begin to interact. We’d show the beginning of Méliès’s film that takes the astronomers up to the moment they land on the moon. Then we’d invent a whole new story about what happens to them once they’re there.”

As the score developed, Norman came up with a clever vocal invention — the Earthlings would perform their roles speaking English, while the Moon People would sing in a totally made-up language (constructed entirely of vowel sounds) that he playfully named Moonish.

A Trip to the Moon (in its original 77-minute version) was premiered at the Berliner Philharmonie on June 18, 2017. Conducted by Simon Rattle, it included the musicians of the Berlin Philharmonic, a large cast of actors and vocalists, conservatory students, school children, and adults’ and children’s choruses.

“All told, I think there were 250 people on stage,” says Norman, still somewhat in awe. “Three weeks later Simon conducted it with the London Symphony in London in an all-new production. The productions were mind-blowingly different. I’ve completely redone it for Disney Hall and cut the length by a third.”

Norman says he thinks the new version is better and tighter.

“When we did it in Berlin the ink was still wet and we just stuck it on the stage. With Yuval Sharon directing, this production is going to stress the idea that opera can be at the technological forefront of entertainment, just the way Méliès’ film was in 1902. It’s being paired with Gustav Holst’s The Planets.”

One aspect of A Trip to the Moon that particularly appeals to conductor Teddy Abrams is that it’s fun.

“So often new pieces are composed as brief lead-ins to the rest of the program. Or, if a composer is lucky enough to get a major orchestral commission, they feel the piece has to confront deep, overwhelming matters of mankind,” Abrams says. “But when you look at the pieces people really love, they’ve often been composed with children in mind: Peter and the Wolf, Young Person’s Guide to the Orchestra, Carnival of the Animals. That does not mean, in any way, that Andrew’s music for A Trip to the Moon is simplistic or childish. The music is extremely intricate and challenging rhythmically,” Abrams explains. “Andrew has a sense of sound that is uniquely his own that involves extended and traditional techniques for the instruments. The string writing is especially complex using the extensive use of delicate harmonics to create the otherworldly atmosphere of the moon.

“A Trip to the Moon is playful, but it also teaches us deeper issues about acceptance and identity, but without forcing it,” Abrams points out. “It’s like a PIXAR movie; you can appreciate it as a child and see even more in it as an adult.”