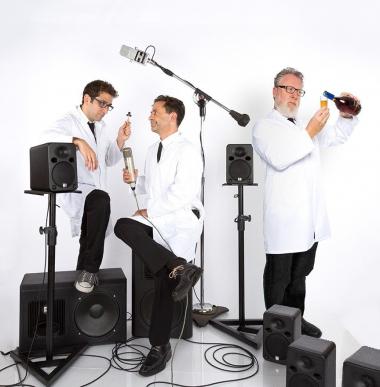 From Cutting Edge to Cozy Cartoons, Pollen Music Group’s Got the Tune

For the past decade, Pollen Music Group has thrived on technology’s cutting edge, crafting soundscapes that bring virtual and augmented-reality productions to life. Based in Emeryville and San Francisco, the company has racked up numerous creative triumphs, like creating the song-driven score for Patrick Osborne’s 2016 animated short Pearl, the first virtual reality film ever nominated for an Academy Award.

Pollen was on the cusp of another breakthrough when it ran smack into the pandemic, which shuttered a specially constructed set for the U.S. premiere of Thibault Mathieu’s mini-musical Out There, an augmented-reality animated short. Unveiled as part of San José’s innovation-oriented Cinequest festival March 5–8, the piece about a shut-in girl whose capacious imagination allows her to escape the confines of her bedroom turned into a wrong place/wrong time case study.

Designed to be experienced within the confines of a bed-chamber-like environment built in an art gallery, Out There featured a Pollen score with spatialized sound. Some sonic elements emanated from physical objects in the room, but it was mostly a virtual audio experience in which a headset-wearing viewer triggered sounds by looking at objects, like a vintage phonograph. Despite excitement generated by the installation, festivalgoers were suddenly leery of hanging out in close quarters as Santa Clara County became an early COVID-19 epicenter in March.

“I was down there when everything was going south,” said Berkeley composer Alexis Harte on a recent Zoom call with Scot Stafford and JJ Wiesler, his fellow Pollen founders and creative directors. The piece premiered last fall at Comic Con Paris and the Cinequest production used “antiques we’d found for this set,” Harte said. “We got a lot of publicity and press in advance, but the festival’s whole VR lounge was a ghost town. Suddenly congregating in small rooms and touching lots of equipment didn’t seem like such a great idea. I knew we were all in trouble.”

While Out There’s state-of-the-art augmented reality was baldly trumped by the rising pandemic, the Pollen team was already in the midst of their most ambitious assignment, an animated series pitch-perfectly tuned to the new zeitgeist. On Nov. 10 Netflix drops the first season of Trash Truck, a kids show by cartoon scion Max Keane (production designer for the John Williams-scored Kobe Bryant vehicle Dear Basketball directed by his father, storied Disney animator Glen Keane).

The 29-episode season follows the pastoral exploits of gap-toothed six-year-old Hank, who roams the open spaces around his rural town with his imaginary best buddy, a ramshackle trash truck, and a posse of critters, including an affable brown bear, a not-particularly wily racoon and a conspicuously well-educated mouse. Pollen’s music accentuates the golden-glow nostalgia that suffuses the series, right down to the main theme whistled by Pollen audio engineer Brandon Wolf, a carefree cadence that harkens back directly to The Andy Griffith Show (Ron Howard was 6 years old when the sun first dawned on Mayberry, in 1960).

If Trash Truck’s beautifully rendered, old-school 2D animation seems like a departure from the company’s usual work stretching the possibilities of music and tech, well, that’s misunderstanding Pollen’s priorities. “It’s true, we weren’t reinventing the immersive story format,” said Scot Stafford, who oversaw music and sound development for numerous award-winning 360/XR studio Google Spotlight Stories. “But on an artistic level, this grew out of what we’ve been doing, song-driven and music-driven storytelling for animation. Despite all the innovation. we’re always trying to focus on the art of musical storytelling.”

Given the way that digital technology has transformed our world over the past quarter century it’s not surprising that Pollen tends to attract attention for working hand in hand with software developers creating and refining applications for VR and AR. But what makes the company such a potent creative ally is that the team is grounded in an approach to music-making that makes emotional coherence a priority.

Take Pearl. Harte’s folky, acoustic-guitar-driven score seems to comment directly on the characters and their archetypal journey as a girl travels across the decades on an immersive visual and sonic road trip, accompanied by her single father and various friends as she turns into a self-possessed young woman along the way. Set aside the groundbreaking Oscar nomination, the Emmy Award, the Annie, and the Peabody, and there’s no better measure of the piece’s singular accomplishment than its ability to melt even the most irony-hardened hearts.

In Los Angeles to consult with writers for The Simpsons shortly after Google Spotlight Stories and Evil Eye Pictures released Pearl in 2016, Stafford was on hand to provide insight into how best to mock the still clunky virtual-reality technology.

“They just wanted to make fun of VR in the opening Couch Gag for the 600th episode,” Stafford recalled. But in the writers’ room, Simpsons showrunner Jim Brooks looked over and told him, “I saw Pearl and I wept.”

What started as a minute-long riff spoofing VR via Planet of the Apes turned into a three-minute sojourn into the heart of silliness. It’s probably not a coincidence that Brooks is the father of daughters (as are the three Pollen founders).

The music in Trash Truck is similarly informed by the experience of childhood, set to an Americana palette. Since Netflix releases entire seasons at once, the Pollinators had to score more than 300 minutes before the public got a glimpse at the series. “You’re playing a big role in the creation of this world,” Wiesler said.

“We started out very small scale, with guitar, mandolin, maybe fiddle and hand percussion,” Harte continued. “By the end, half of the score was written very orchestrally. We were always trying to find what worked.”

“We never want it to be cute or saccharine or heavy,” Stafford said. “A lot of the time we don’t give kids credit for their emotional intelligence. You don’t have to underline everything. They get it. We settled on a combination of Americana/folk storytelling mixed with orchestral work inspired by some mid-century American composers like Aaron Copland.”

With parents desperately looking for ways to keep kids entertained, the timing of Trash Truck’s release seems ideal. If the advent of the pandemic squashed the introduction of Out There, it may end up radically expanding the audience for VR. Pollen has two major projects coming up with Baobab Studios, including the gothic fairytale Baba Yaga. A VR animated short directed by Eric Darnell and starring Glenn Close, Kate Winslet, Jennifer Hudson, and Daisy Ridley, “it’s a pretty amazing immersive story that’s going to get a theatrical release as well as a VR release on Oculus,” Stafford said.

With constraints on travel “it’s not hard to imagine how powerful something that makes you feel you’re somewhere can be, that makes two people feel they’re somewhere together,” he said.

“The screen isn’t going away,” Wiesler added. “Home theater is going to grow. AR has a lot of legs. It can be a shared experience type of entertainment and storytelling that we haven’t imagined yet.”

And before we imagine it, Pollen Music Group will be dreaming up how it sounds.