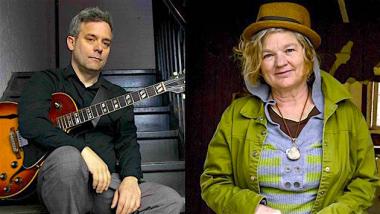 Holiday music may be unavoidable in the weeks following Thanksgiving, but that doesn’t mean subsisting on the thin gruel of blandly arranged carols and witless pop. Nourishment for the soul abounds if you know where to look. Here are some suggestions to ring out the year in euphonious style.

The Oakland Freedom Jazz Society’s long-running Monday night series at the cozy storefront performance space Studio Grand is an invaluable oasis of creative music during a slow time of the week. This double bill features clarinetist/composer Aaron Novik’s minimalism-meets-swing project O+O+, which features an embarrassment of improvisational riches with bassist

With his 50th birthday approaching in a few months, Berkeley drummer Scott Amendola isn’t suffering through mid-career doldrums. In October he was in Hawaii performing with jazz guitar star Pat Metheny, and last week he was collaborating mano a mano with Laurie Anderson at the SFJAZZ Center on a program she dubbed “Songs for Men.” He presents two nights of new music at Albany’s finest venue and dive bar, The Ivy Room, with Damn Skippy, an all-star aggregation of longtime comrades featuring violinist Jenny Scheinman, bassist Todd Sickafoose, and guitarists Will Bernard and John Schott.

New Zombies combines the music of El Cerrito saxophonist/composer Dan Plonsey with the surging funk-driven Afrobeat sound created by Nigeria’s Fela Kuti, which might seem odd, but the artists are linked by a deep appreciation of the radically zany gesture. Of course, Fela was taking on a brutal kleptocratic state, and Plonsey teaches mathematics at Berkeley High, so there’s that. Brimming with some of the Bay Area’s most vivid improvisers, the 11-piece band celebrates the release of an excellent eponymous album at Oakland’s Stork Club Dec. 15 on a beat-crazy triple bill with drummer Jordan Glenn’s BEAK, and Forer Effect, a new duo featuring percussionists Sheila Bosco and Suki O’Kane.

Will Bernard and Beth Custer | Dec. 21

Clarinetist, vocalist, and composer Beth Custer has been keeping a lower profile in recent years, popping up for occasional gigs with Trance Mission, her band with Stephen Kent, or for various commissions. On Dec. 21, she returns to the Red Poppy Art House, which has become her home base, to play original chamber jazz tunes with Brooklyn guitarist Will Bernard, a player associated with funkified acid jazz but fully versed in a wide array of styles.

Correction: Erik Jekabson's performance is at Oakland's Piedmont Piano, not the Sound Room as originally posted.