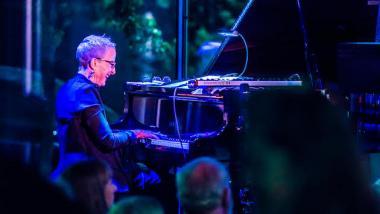 “This is dangerous music,” pianist Myra Melford said with a rueful chuckle during a brief pause toward the beginning of her second show Friday night at the SFJAZZ’s intimate Joe Henderson Lab. In fact, her drummer, Tyshawn Sorey, was dripping blood on the bandstand after slashing his left ring finger on the edge of a cymbal. He gamefully played through the end of the tune, patched himself up with several band-aids and plunged back into the cauldron. In the creative sense, Melford’s music is indeed risky in that it never settles for long into a particular groove, mood or texture. Protean by nature, it’s always on the edge of sliding into new territory.

On the first of two nights at the Joe Henderson Lab celebrating the release of the excellent new Snowy Egret album The Other Side of Air (Firehouse 12 Records), Melford ranged far and wide, plowing deep into red-soil blues and ascending to ethereal heights. The Berkeley pianist has a long track record of assembling or cofounding exceptional ensembles, and her quintet Snowy Egret is one of the most enthralling bands on the scene. In addition to Sorey, an increasingly acclaimed composer and recipient of a 2017 MacArthur Fellowship, the band features Ron Miles on cornet, Stomu Takeishi on bass guitar, and guitarist Liberty Ellman. 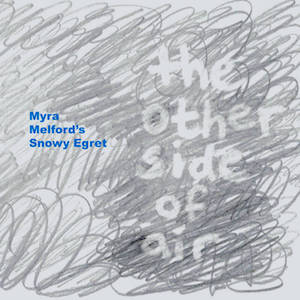 The first show was more focused than the second, delivering the kind of transporting experience and sensation of discovery that can make jazz so exhilarating. Whether or not Sorey’s sanguineous encounter with his kit changed the trajectory of the second show, Snowy Egret pushed more at the extremes, with the center holding less as the band sounded more pummeling and volatile and beatifically rhapsodic.

Focusing on music from the new album, Melford opened the evening with the stuttering “Small Thoughts,” a piece that quickly turned into a broken-field sprint. “City of Illusion” coalesced as a series of lapidary melodic themes that furled around Melford’s stately piano without adding density.

She also occasionally dipped into her older repertoire, like with the gorgeous ballad “Ching Ching/For Love of Fruit.” Trading piano for melodica, the piece floated into a sublime duet with Miles on plunger mute, an implement usually employed for earthy smears and vocalizations. For Miles, the plunger accentuated his lyricism on a theme that sometimes brought to mind Billie Holiday’s plaintive “Don’t Explain.”

The band was at its most spacious and texturally acute on the title track, “The Other Side of Air,” which opened with a hushed passage featuring Takeishi on shaker, Sorey on brushes, and Melford plucking and strumming the strings inside the piano. On the angular “Living Music,” Takeishi turned his music stand into a percussion instrument, even flashing his stand light at the audience. While the players in Snowy Egret regularly take flight with astonishing solos, Melford’s music is designed so that improvisation feels woven into the flow. No matter how spectacular a passage, it’s rare for applause to break out mid-tune, as the audience seems keyed into what’s about to happen next.

In many ways the band’s geography reflected the dynamics within the ensemble. Melford’s piano was stage right, giving her a pretty clear view of her comrades. Positioned in the crook of the piano, Miles rendered Melford’s melodies with scrupulous care, employing a variety of mutes. At center stage, Takeishi was the band’s essential fulcrum and the key to its mutability. He can play walking bass lines or singing counter melodies. He can let plump, resonant notes hang in the air, or hummingbird-strum the strings to fill up the bottom.

Positioned at the back of the stage in the corner of the Lab, Sorey was a remarkable force, a thoughtful whirl of motion who plays with 500-watt power without overpowering the band or the room. Ellman doesn’t get lost, but he’s in a tricky position at far stage left. With Takeishi taking up so much space where guitar might otherwise fit, Ellman has to pick his spots carefully. With his lean, clean sound, you have to sometimes listen carefully to find his finely wrought latticework. When space opens up for him to move to the foreground, he plays with captivating poise, distilling the energy and movement of Melford’s music with compressed economy.

By the end of the evening, after countless moments of unabashed beauty and transcendent communion, what Snowy Egret offered was a sense of limitless possibility. With five utterly distinct musicians changing direction together in mid-air, Melford’s music can — and sometimes does — go anywhere and everywhere.

One of the region’s most vigorous creative forces continues to evolve and thrive through personnel changes.